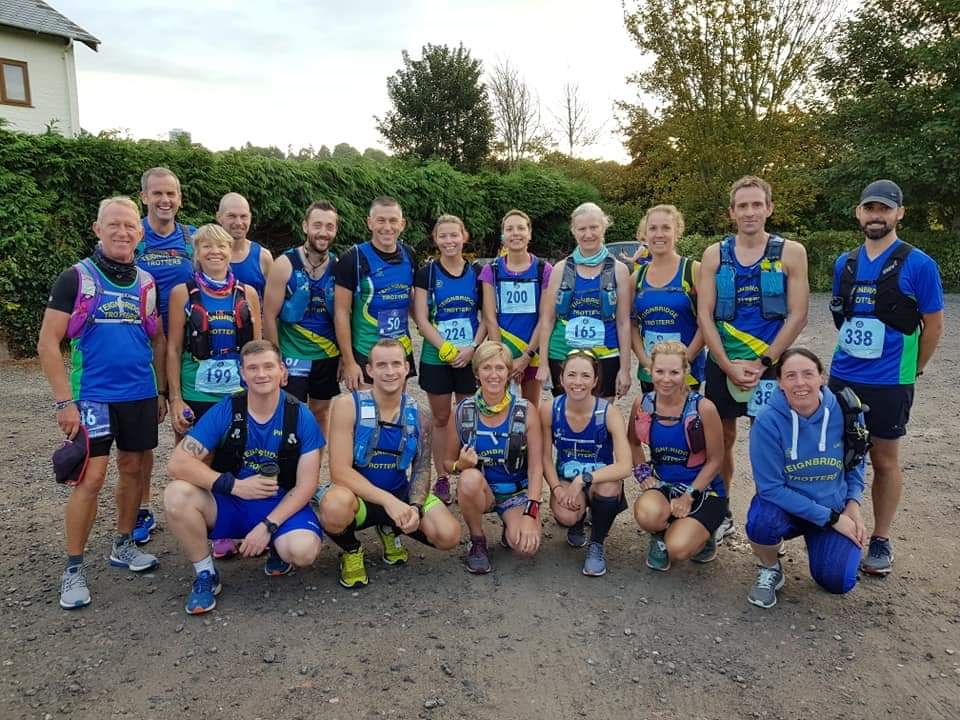 Sixteen Teignbridge Trotters took part in the challenging THHN City to Sea 26.6 mile run or walk from Exeter Riverside to Babbacombe Downs in Torquay, on Saturday 7th September. Kurt Read and Joe Hornsby took on the 34 mile Ultra. This was the 10th Anniversary of this superbly organised event.

The first 20 miles of the race from Exeter to Shaldon was comparatively flat. This is where the going got tough, leaving Shaldon to the finish line on the Downs. A very hilly 6 miles, which really tested the marathoners. The overall route is varied with riverside paths, country lanes, woodlands, stunning cliff tops and beach harbours.

Weather conditions for the runners were just about perfect.

Matthew Steele led our Club runner’s home, finish in 5th place in a great time of 4:06:00. Not to be out done, Rachel Steele was our first female across the finish line, clocking a time of 5:00:28.

Kurt completed the Ultra in a great time of 6:05:32 to finish 8th. Unfortunately Joe picked up a knee injury at the 20 mile mark, so with great encouragement from Kurt, Joe managed to complete the marathon distance. His finishing time was 4:51:55, finishing 19th overall. There were 54 even more tired finishers!! 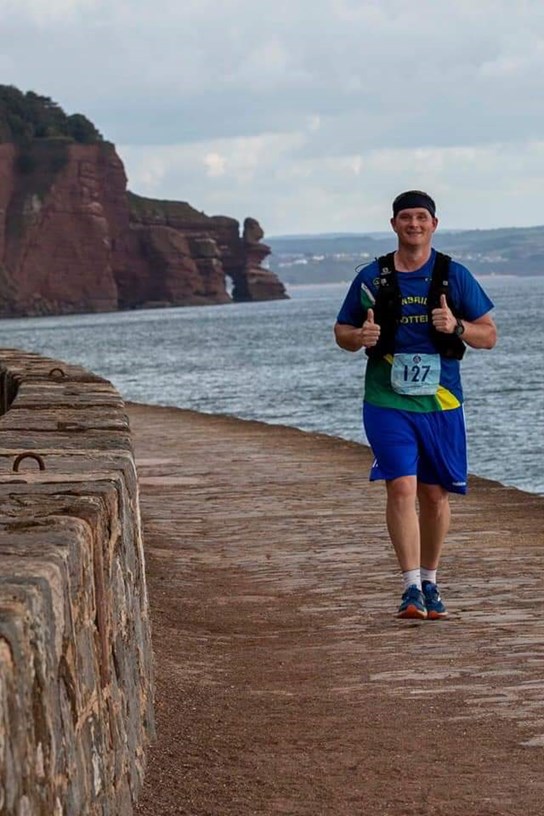 Paul Dainton on his way to completing C2S 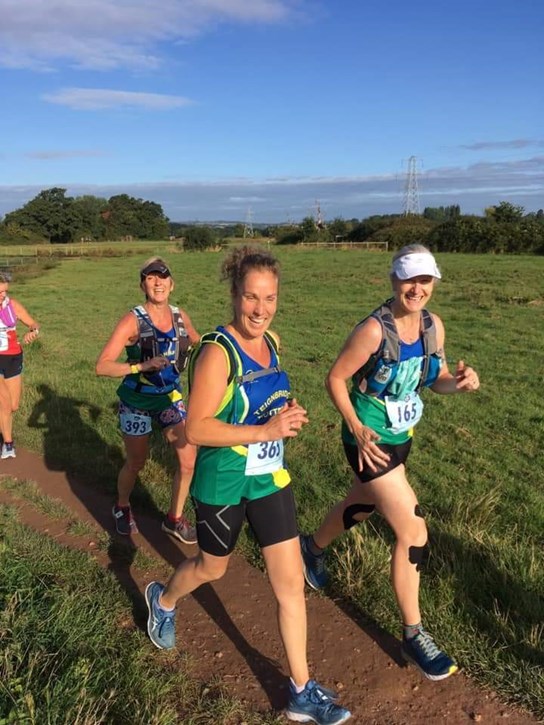 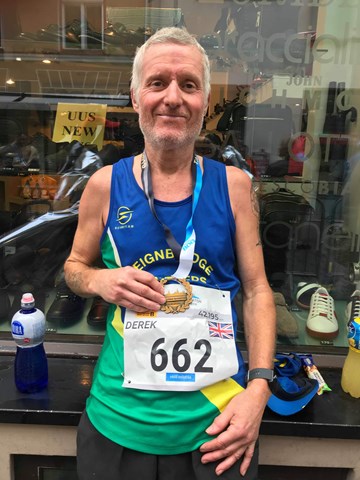 Derek having completed The Tallinn Marathon in Estonia

Derek Skinner and Jackie boarded an evening flight from Gatwick to Estonia on Thursday 5th September, to take part in The Tallinn Marathon in Estonia. There was also a Half Marathon and 10K event. Estonia is located on the eastern coast of the Baltic Sea and shares land borders with Russia and Latvia.

2019 celebrates Tallinn city’s 800th Anniversary since its first recorded mention, 30 years since the first Marathon was run in 1989, and the 20th Anniversary of the Fall Race Optibet 10K.

This is the 10th consecutive running of this increasingly popular fast, flat Marathon, with runners from all over Europe taking part. The start and finish was held at Freedom Square.

The course took the runners through many scenic areas of Tallinn, including the stretch from Kadriorg Park to Pirita, around the Port Of Tallinn and through the city’s Old Town.

The Marathon Medal presented to all finishers had a unique gold oak leaf engraved, in recognition that you have become stronger in mind and body having completed the distance.

The weather conditions on the day were cloudy and mild.

Derek was pleased with his run as he has an Achilles issue at the moment. His finishing time was 3:50:40, placing him in 872nd position. Derek finished 30th in his age category. Derek reported that the support received was so friendly and supportive.

The winning time was 2:12:42 from a Kenyan, not surprising really, Josphat Leting. There were 2158 finishers.

This was Puretrails first ever event, held in 2015. This race is a tour of the southern Moor, with over 500 metres of elevation. Max Conroy was brave enough to take up the challenge.

Described as a classic trail route, involving tor-topping, bog hopping and river crossings!! The highest points of the course were Pupers Hill, Snowdon, and South Dartmoor’s highest point, Ryders Hill. Not to forget the infamous Red Lake Volcano. The race started and finished at Scorriton, in the parish of West Buckfastleigh.

Our four Trotters who took on the Volcano, all ran well. Tilly Woods was the first Trotter home, finishing 18th overall and taking 3rd place in the female competition. Tilly’s impressive time was 1:35:20.

Oliver Paulin, running for Coventry Godiva Harriers, took the honours, winning in a great time of 1:17:20. 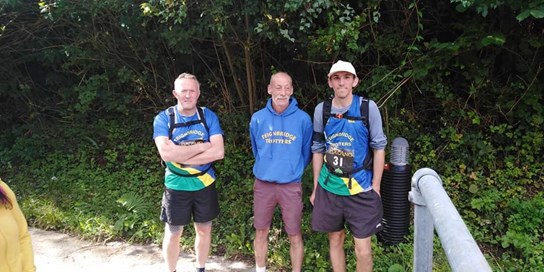 The Three Amigos, Robert, Roger and Max at Dartmoor Volcano 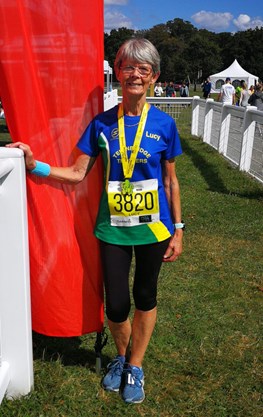 Lucy Payne travelled east to Hampshire, to take part in The New Forest Half Marathon on Sunday 8th September. There was also a Marathon, 5K & 10K races run, including two junior races.

The start and finish centred on the New Park Showground in the village of Brokenhurst. These multi-terrain races meandered through the heart of the New Forest National Park. The trails included all weather loose chipping paths and open quiet roads. The runners frequently passed the famous New Forest ponies grazing nearby.

Lucy ran yet another very consistent race, completing the course in 2:05:11, to give her 1074th place. 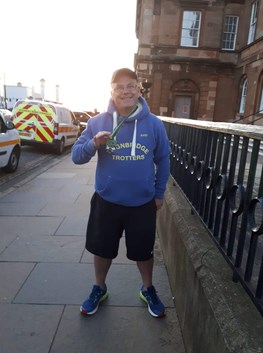 Andy adds Ayr Half Marathon to his growing collection!

Andy Distin travelled to south west Scotland to take his place at the first running of The Ayr Half Marathon, on Saturday 7th September. There was also a 10K race on offer.

The start and finish line was situated at Low Green, on the seafront, with the Isle of Arran as a stunning backdrop. This race was billed as a fast flat course, with 118 metres of elevation.

The race route took the runners towards the city centre, passing the 16th Century Citadel and St Johns Tower. Heading out of the city, the racers pass the old Race Course, which was a gradual downhill section. Robert Burns birth place is then encountered, before passing the Brig o’Doon house, with views over its famous bridge set. From here, the race continues out into the Scottish countryside and out towards the coast. At this point, Greenan Castle Ruin, a 16th Century tower house was reached, allowing for some magnificent views along the Ayrshire coastline. Coastal paths and some quiet local roads led the back to a grandstand finish on the promenade.

Andy ran really well to finish in 443rd position, in a great time of 2:38:42. Well done Andy in travelling so far to represent the Club.

The winner was Sean Chalmers, representing Inverness Harriers, clocking a time of 1:11:35.There were 465 runners.