Trotters brave the cold at Dalwood

East Devon hills were alive with Teignbridge Trotters at the weekend. A round dozen sported the royal blue at the Dalwood Three Hills Challenge, part of the East Devon Community Race Series put on by Axe Valley Runners. Conditions were good despite the chilly breeze and the course was mainly dry under foot.

Multi-marathon runner Richard Keatley has been busy again, completing his 89th marathon at Betteshanger Country Park in Kent. In glorious sunshine, but against a strong headwind at times, Richard completed the race in 4hrs 55 min. Although the route was 13 laps of tarmac, Richard still regards this as one of his favourite marathons.

Graydon Widdicombe was in warmer climes, as he took part in Sunday’s 33rd Malta Marathon. This is a point-to-point race and as Graydon was staying in Silema, which was where the race ended, he took the coach that the organisers had put on to get to the start line in M’dina. This did mean catching the 6am coach for the race start at 7:30am, but the early start had the benefit of running most of the race in good, relatively cool, conditions.

The race itself was well attended with approximately 970 marathon runners and 3700 half marathoners, who started later. This meant that the marathon runners joined the half runners at around 16-miles so there was plenty of company through to the finish.

There were some nice moments in the race - M’dina itself is beautiful, and is the original capital city of Malta - with some downhill stretches to help keep the pace ticking over. As such, Graydon felt strong and was delighted with a new PB, knocking 10 minutes off his previous best with a time of 3:19:28.

Closer to home, and also in brilliant sunshine, Paul Sharples completed the Hameldown Hammer half-marathon. This challenging off-road event starts at Widecombe and takes runners on a steep course over Hamel Down, involving a total ascent of more than 600m, using rough tracks and grassy paths and affording excellent views of the surrounding moor and tors. In a strong field Paul finished in a good time, well inside 2hrs 15min.

Many thanks to Richard, Roger, Graydon and Fizz for the above - any mistakes are mine! And special thanks to Graydon, retiring Press & Publicity Officer, for all his fantastic reporting over recent times. 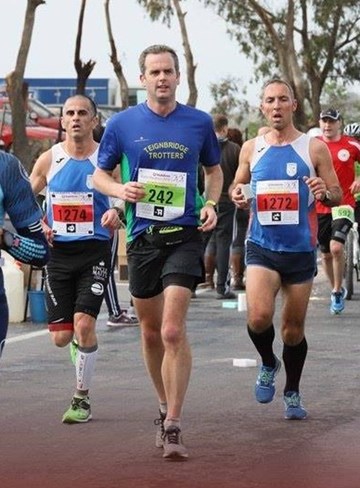 Graydon on his way to smashing his marathon PB. 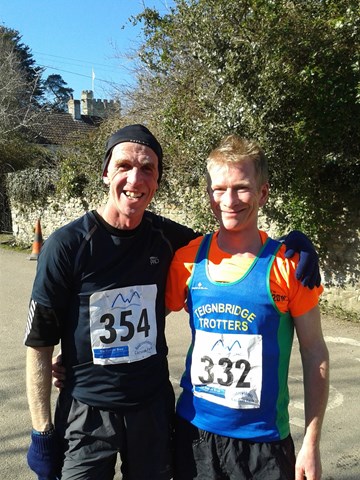 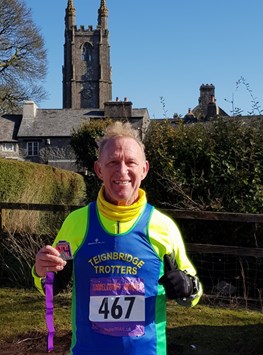 Paul after the Hameldown Half Marathon 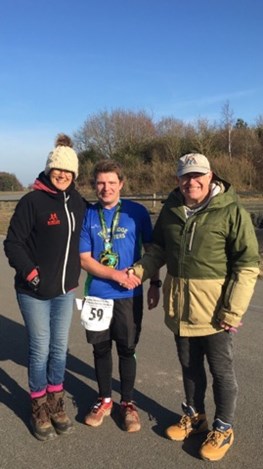