The racing snakes in the Teignbridge Trotters got their kicks in Devon this weekend, covering distances from 5k to 35-miles.

Lance ‘Skippy’ Mason and Steve Barker showed they were made of cast-iron stuff after completing the South Devon leg of the Coastal Trail Series on Saturday February 6.

Now in its 12th year the South Devon stage has become a cult classic. The course, contained within an Area of Outstanding Natural Beauty (AONB) around Start Point, Prawle Point and Slapton Sands, is both picturesque and punishing.

Jon Oxley and Graham ’Inky’ Penn popped over to Stover, Newton Abbot, on Saturday February 6 for a 5k race. It was a two lap course and the event was in aid of Riding for the Disabled Association.

The conditions were less than ideal: heavy rain and gale force winds with lots of mud made it exceptionally sticky. John finished in 26.55, 15th, and Inky slipped over the line in 29.08 and was 18th out of 31 finishers.

The first weekend in February ended in fine form with the fast and furious Fulfords 5 in Exmouth.

For many, but one in particular, it was a great day in the office. Geoff Davey was first V40 and was on the third place mens team alongside the also in-forms Jamie Barnett, Kevin Woodard and Tim Pratt. He was also part of the men's vet team that landed third prize with Julian Scanes, Mark Hutchins & Graydon Widdicombe. Unbelievable, Geoff.

Photos show our mens captain in the endurancelife marathon, Jon Oxley and Inky at Stover and Jon at Stover - big well done to Jon who also ran the Fulfords 5 on Sunday! 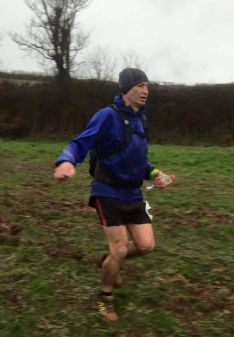 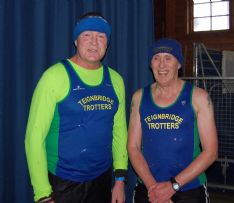 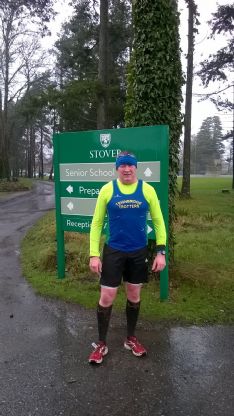