A large group of Trotters travelled to the Clay Imerys Half and Marathon, organised by St. Austell Running Club and held at Cornwall college.  This race is ran on a hard, undulating course in and around the clay pits of St Austell.  It’s run on private land and is the only time of the year that anyone can access it, and the terrain is likened to running on the moon, although there are some lovely woodland tracks as well with the sound of a cuckoo in the back ground.

It was almost perfect conditions although it was a bit warm in places and some strong headwinds too.  There were some fantastic results with Adam Johnstone finishing third at his second ever marathon, and Allen Taylor doing a course best just two week after his 100-mile race.  Also, Sally Ingledew did her 199th marathon, leaving Dartmoor Discovery for her 200th, whilst Tracy Elphick was 3rd lady.  Finally, Trotters claimed the team male prize (four counted), so it was a great day out for them. Marathon results were: 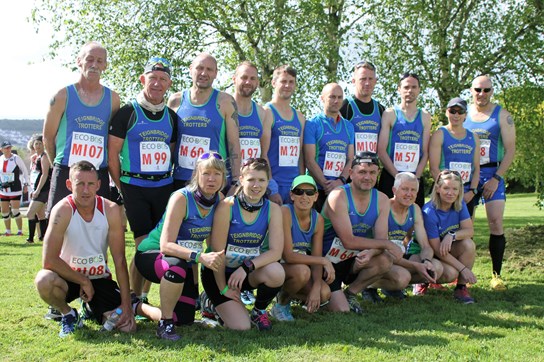 East Allington Primary School held the third running of the East Allington 10K on Sunday 14th May, organised in memory of their beloved teacher, Claire Widdicombe. The event was another big success, with a 3K fun run for the kids, plenty of cakes and bacon sandwiches, a bouncy castle and medals for each finisher.

The course has a hill to start with plus there’s a sting in the tail too, but the views over the surrounding countryside are stunning, and the course takes runners through the Fallapit Estate, which is stunning. Luckily, the rain held off and the whole race was ran in good running conditions, and was well organised by the school 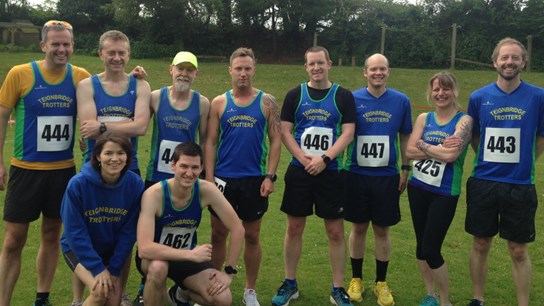 After joining Teignbridge Trotters in January, Kelly Rainbow ran her first race ever on Sunday - Tewkesbury Half Marathon, finishing in 2:06:51.  Kelly commented that the conditions were very hot but she’s pleased she got it done in the circumstances!  Very well done to Kelly for her first race in the famous club colours.

Richard Keatley did the Top Gun marathon on Friday 12th May, which was on Walton on Thames. The course was 8 laps, and it’s a very picturesque route although quite humid, with a few showers too. Richard managed 5:06.

Also, Richard took part in the Bewl Water marathon in Kent on Saturday 13th May, which was his 57th marathon, finishing in around 5:30 in warm conditions. Due to circumstances out of his control, he had to drive around 600-miles in one day, but still made the start line, and the finish, so well done to him.

Kathryn Steemson travelled up to Ottery on Sunday 14th May for the Ottery 10k, organised by Honiton Running Club. She managed 49.36 (103 out of 301 finishers), which was a course PB of 9 minutes. Kathryn said that this was her second sub-50 minutes at the 10k distance (and the first that wasn’t on a downhill course), so she is very pleased with this time.

Three Trotters travelled to Bideford to take part in the Bideford 10K. The course is a combination of road and track, and is considered by runners to be a good one to try for a fast time.

Conditions on the morning of the race were good, but quite windy on return. The course takes you 5k out on the road incorporating two hills but nothing too demanding, with the return leg being on the Tarka Trail. There were record entries this year with 931 finishers, and Lucy Payne ran a time of 57:01, for second FV65 for 526th, whilst Rod managed 59:00 for 606th. Laura Law also ran, claiming 2nd senior lady in a time of 42:21 for 63rd place.

Paul Dodson ran HOPE 24 this weekend, which is ran around 5 mile loops over 24 hours, in Newnham Park in Plymton. The start and finish is at the same place, and each loop takes in some steep hills through fields and woods. The race started at 12pm on Saturday and finished at 12pm on the Sunday and it started off very warm, but then by 6pm it started to rain. Unfortunately, the rain then got a lot heavier so the organisers suspended the running from 11pm until 5am as the trails were too dangerous to run on. Paul managed 50 miles but his actual running time was 8:39:20, and climbed around 4800ft of ascent.

Teresa Holmes also did the event with as part of a team of 7. She completed 4 x 5-miles over the 24 hours.

Thanks for all the submissions for the report, and thanks also to Lance Mason for the pictures from Imerys. 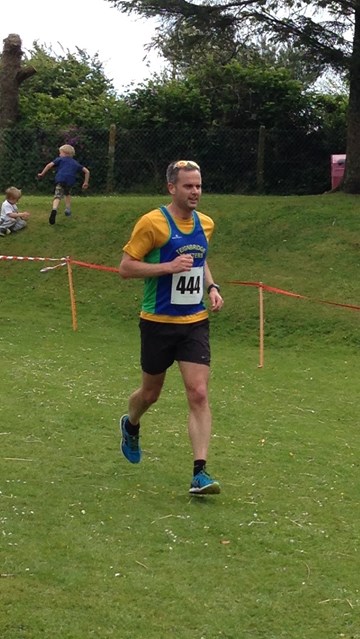 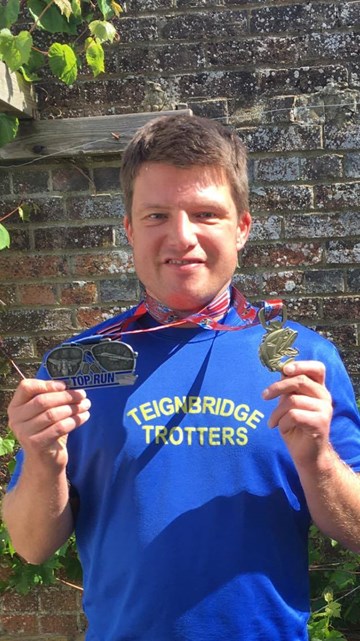 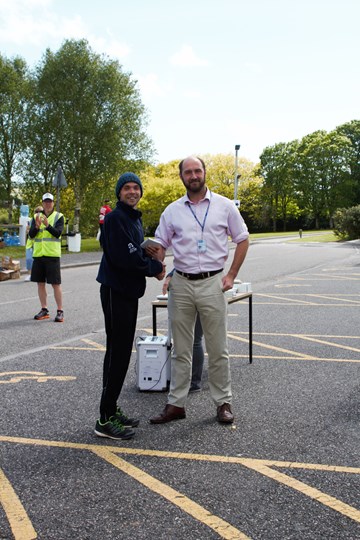 Adam collecting his prize at Imerys