A Teignbridge Trotter well known and respected within the club and beyond, multi-marathon runner Sally Ingledew, proved her skills at shorter distances at the weekend. Sally travelled to Chippenham in Wiltshire for a Good Friday 10 mile road race in a quiet rural setting. The fast, flattish course, protected by wide country lanes, provided plenty of PB potential, according to race organisers Cadence Events. With a 1.5 mile start slightly downhill leading inevitably to a 1.5 mile slightly uphill pull towards the end, the out-and-back race started and finished at Stanley sports ground near Chippenham. Sally came home in 1.28.15, thus breaking the Trotters’ 10 mile female vet 55 club record.

In the locally based Fast Friday 10K, organised by City Runs events in Exeter, Peter Heckles finished a creditable 18th in a field of 119 finishers, in 38.26, while Louise Stokes, proudly running her first race in the Trotters’ royal blue, came 183rd in 68.26.

A total of 136 runners completed the Axe Valley Runners 7 mile multi-terrain Kilmington Kanter, in East Devon. These included eight eager Trotters who were not disappointed with the challenging, scenic race, through local lanes, fields and woods, forming part of the East Devon Community Race series. After leaving the cricket field start area Roger Easterbrook settled into a pack of five competing for third place. All Trotters commented that it was a good race with lots of friendly marshals, run with a keen competitive spirit.

Not forgetting the children and possible future Trotters, Rosie Steemson, Feya and Toby Easterbrook took part in the 1k Fun Run which attracted over 100 young runners.

A Trotter quartet took part in the Easter Bunny 10K event at Yeovilton, Somerset, organised by Yeovil RC. The race starts within RNAS Yeovilton airfield and goes out on to the road to follow a flat, fast course around the picturesque Somerset villages. Runners experienced great conditions with a gentle breeze and light cloud for most of the race. Jo Randall was first Trotter home in 186th place and a time of 50.15; this was Jo’s first race after giving birth to daughter Zoe around Christmas time. Sally Ingledew closely followed Jo home in 198th, 51.35, breaking her own V55 10K club record by one second. This was Sally’s second club record breaking run over the Easter weekend. Rod Payne was next in 245th and a respectable time of 55.00, and was made to work hard to keep ahead of Lucy Payne, snapping at his heels in 249th place in 55.23, thus securing first prize in the FV65 age-group. There were 404 finishers.

Dave Taylor, fast becoming Trotters’ Mr Duathlon, participated in the British Duathlon Age Group Championship a week ago. The event was held at Bedford Autodrome motor race track. The British Triathlon Federation heralded the event as ‘the best of British multi sports athletes battling for a GB title'. Dave is not sure that he falls under that description, but he did come second in his age category (V70) and was surprised to be presented with the silver medal for his age group. Dave’s time was 2:23:26. The distance was the standard 10k run, followed by a 40k cycle ride and a 5k run. Conditions were hot and sunny, with a strong wind which both helped and hindered.

Maggie Butt and her friend Susan took part in the Teignmouth Rabbit Run, a fun run raising money for 4th Teignmouth Scouts. The run started at Teignmouth Pier and took runners up to the Rowdens before returning to the pier, where each received a finishing medal. 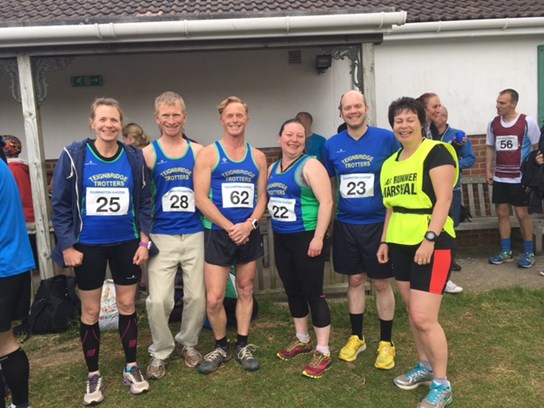 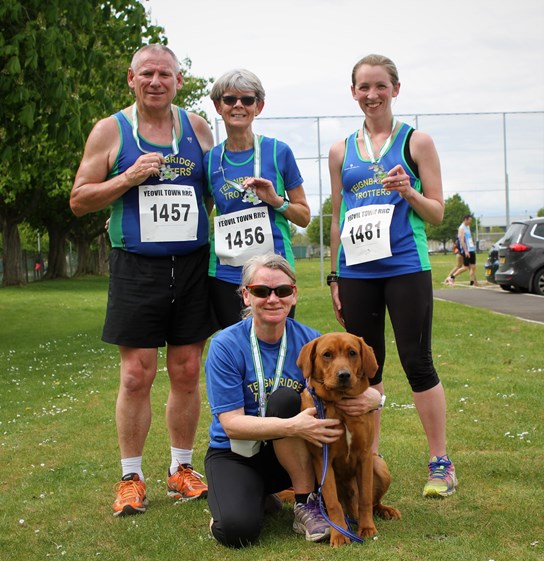 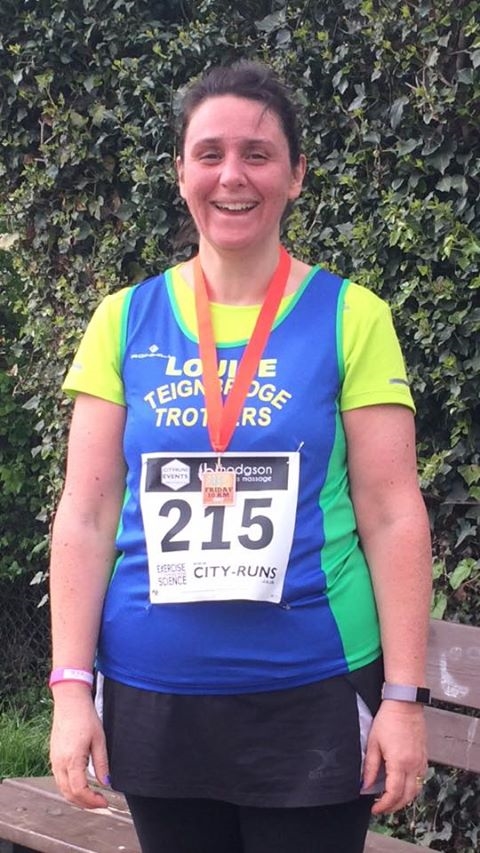 Louise after her Fast Friday 10K