Records tumble at First Chance 10K, and Trotters travel to the Stoke Stampede 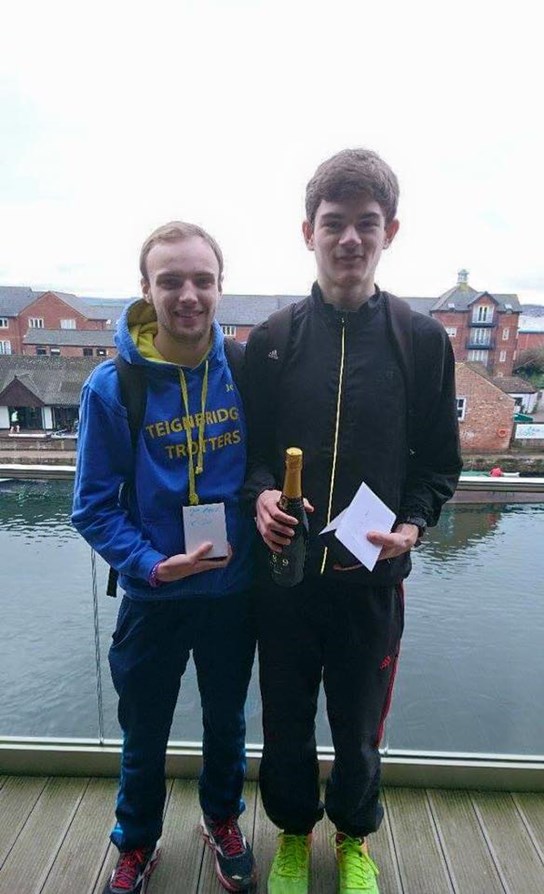 Josh and Jamie with their Under 20 prizes 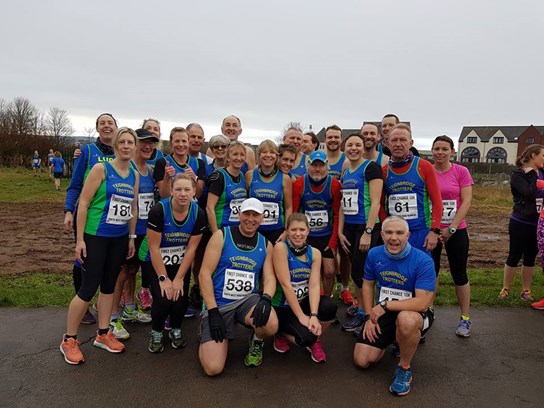 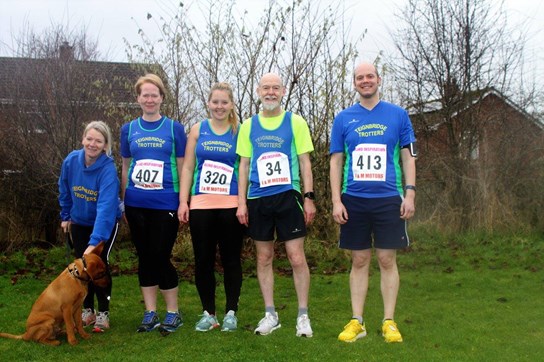 On the first main racing weekend of the New Year, many Trotters took part in the local First Chance 10K, excellently organised by South West Road Runners.  This chip-timed event is ran on a flat and fast course, and is a great New Year opener for runners to see how their training is going.

This is always a popular race for Trotters, and this year there were 33 finishers with many PBs and also an amazing three club records fell.

Jamie Barnett has been training really well and his hard work paid off at this race, which he was targeting.  He went under 34 minutes for the first time with a phenomenal 33:48 for fifth place overall, claiming first Male Under 20 prize in the process.  Also, he is now the quickest runner over the 10K distance that has ever ran for the Trotters, which is a fantastic achievement as that record has stood for 21 years.

A few days before the race, I asked Jamie some questions about his running, and he was kind enough to answer them in quite a lot of detail.  I follow him on Strava and he has been clocking some amazing and consistent mileage, so it really is great to see that his hard work is paying off.  What he has written gives a real insight into what drives him and I hope you enjoy the read, which is at the end of the report.

Other club records were broken by Lucy Payne, who knocked nearly a minute off of her own FV65 record, and also Graeme Baker for the V75 category.

There were also many Trotters who got PBs at this race including Claire Ayling (3 mins), Gavin Forbes (nearly 3 mins), Josh Taylor (42secs), Hannah Jones, Nikki Evans (3 mins), Lucy Evans (3 mins), Kevin Woodard and Graydon Widdicombe (30secs). Also, it was Emma Ray’s first ever race and she wore her Trotter colours with pride.

There were 514 finishers and Trotters results are below. Very well done all and I hope I haven’t missed anyone.

As mentioned above, Jamie (who turns 19 at the end of February) was kind enough to answer a few questions about his training, what motivates him and what his future goals are.  He talks a bit about training paces etc, and the goals he has in mind equate to the following.

Jamie drafted this before today’s race, so his training is obviously paying off!

What got you into running in the first place?

I started running in 2013 at the age of 15, and there are two reasons why I started.  I was inspired by watching Mo Farah in the London 2012 Olympics, and then I also used to go and watch Dad run races like The Great West Run, and the Torbay Half Marathon.  I remember seeing Kairn Stone win The Great West Run.  It really interested me, and made me want to do the same.

What is your motivation to get those training miles in?

What did your training look like for First Chance 10K?

What’s next for you?

Assuming I’m able to run at my best at The First Chance 10k, with good conditions and not having any issues myself, I will then assess my time and decide what I need to do to progress.  I will do another 2 month training block, then race the Age UK Exeter 10k, before starting my summer training in April.  I want to run some fast times on the track, and try to break in to the UK Top 10 for Under 20 athletes in 5k, 10k or Half Marathon.  I also have my eye on placing highly in the Plymouth, Torbay and Great West half marathons.  If all goes to plan, I should run well under 1:15, which will then allow me to get a championship place in The London Marathon 2018, where I will run the distance for the first time!