The weeks racing started early with the Saltram summer 5k series taking place on Wednesday 8th August.  James Saunders travelled down to Plymouth for the event which started at 7-00pm. The weather conditions were just about perfect for the 237 runners.

The course took the runners around the Saltram estate including a stretch along the River Plym. The start was a steep fast downhill section before encountering an undulating middle part of the race. The runners were then faced with an uphill finish. Pacing the race was of great importance due to the tough finish. The race was well marshalled & the race had a relaxed feel about it. The race was won by Jim Cole in a time of 15:55. James finished 30th in a time of 20:40.

On Friday 10th August, 24 Trotters travelled the short distance to Haldon Hill for the Forest Flyer organised by the Dawlish Coasters. This was a championship race, hence the good turn out.

The race was organised by the Dawlish Coasters and as always was superbly run. The course was mainly trails that took the runners through the pine forests. The first 4 miles was either undulating or steep downhill sections. The final 0.8 miles was a steep up hill finish that tested all the runners. The marshals encouraged the runners all the way around the course which helped enormously. The race was won by Jake Liam Smith (Axe Valley Runners) in a great time of 25:15. 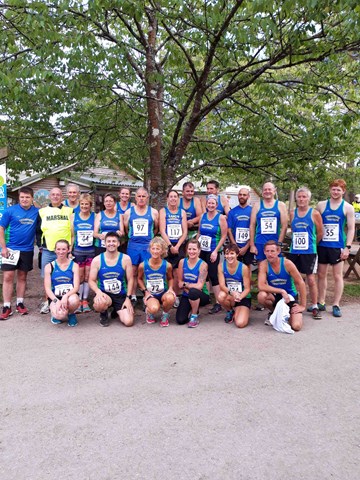 On Saturday 11th & Sunday 12th August, 11 of our extreme runners took part in the Summer Session Frolic organised by White Star Running. The event was held at Moreton Equestrian Centre near Dorchester. The race limit time was 8 hours & each lap was a 4.4 mile loop. The lap was run on very tough terrain, bouncy thick grass and through shady woodland. There was also a 'love station' situated in a quarry where Tenko was filmed, which us oldies will remember!! Congratulations to Sharon & Paul Sharples who celebrated their 1st wedding anniversary this weekend, the race entry being Sharon's pressie to Paul as running is what brought them together!! 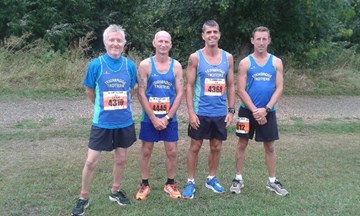 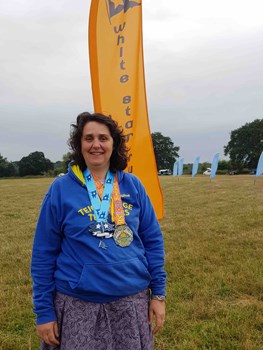 Louise at her first marathon 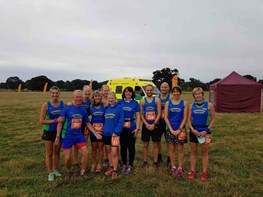 On Sunday 12th August 4 hardy Trotters travelled up to Salisbury to run in the marathon. This was the 23rd running of the event and comprised of a series of running distances including walking. Therefore, the various choices would suit all the family. A mostly off road course that took the runners along foot paths, bridleways, & quiet country roads around the Salisbury Wessex area. Along the way, they would pass historic sites and scientific points of interest. The race started at 10:00 am in cool overcast conditions. The winner was Valeria Sesto in a time of 3:26:39. First trotter home was Roger Hayes in 5th with a great time of 3:32:47. Roger won his age category MV50 to. Lance Mason was 9th in a time of 3:39:43 and also won the MV55 category. 26th was Christian Robinson in a time of 4:10;19 and Derek Skinner finished a very respectable 27th in a time of 4:10:49. Roger, Lance and Christian formed a Trotter team that one the team event to. There were 187 entrants. A very successful away trip.