Gentry Wellies all before her and Wardy Jolly at Escot Marathon

The 6.27 mile race has a reputation of being the hilliest and therefore toughest race in the Blackdown Hills. The route also included a mile of bridle path.
The race start was close to the Catherine Wheel pub, situated in the village square at Hemyock and finished at the County Primary School. The Wellington Monument signalled the half way point of the race.

Louise Gentry and Kim Nichols travelled north to Somerset, and were fortunate to find some winter sun.
Louise ran magnificently to win the female race and also the FV40 age category award. Lou clocked a time of 00:43:27 to finish 40th in the overall standings.
Kim also put in a great performance to finish in 154th place, in a time of 00:55:53.
There were 214 finishers. Each competitor received a medal, a mince pie and mulled wine.
There was a dead heat for 1st place, with Alexander Whittaker (Bristol& West) and Christian Hewitt (Tiverton Harriers) sharing the spoils. The winning time was 00:36:21. 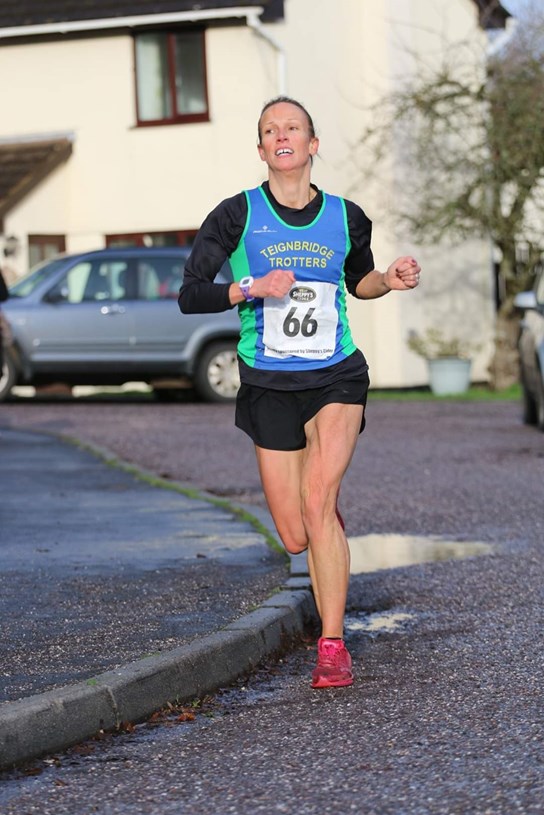 On Saturday 21st December, the Extremly Jolly was staged at the Escot Estate in Ottery St Mary, East Devon.

The event was sponsored by Red Rock Brewery and the 7.5 miler also gave the little elves chance to stretch their legs in a one mile fun run.
The route included trails, woodland tracks, paths, streams, a bridge, fields and water crossings, not to mention mud, and plenty of it!! This trail event also included a 30 metre water slide, the first time a trail run has included such an obstacle.
Fancy dress was also highly encouraged and many runners took up the opportunity, including our festive Trotters.
Six of our fun loving Club runners took up the challenge.
Ed Hounsell was our first runner home, finishing in 57th position, in a time of 1:20:04.
Susanne Westgate ran superbly, clocking a time of 1:26:48 to finish 88th.
The other Trotters positions and times were: Sharon Sharples (147, 1:35:53), Paul Sharples (148, 1:35:56), Sharon Still (159, 1:37:22), Sara Keatley (166, 1:38:11). Unfortunately, Mark Wotton took a nasty fall, so sadly had to retire.

All finishers were treated to lots of goodies, including a Santa 'furry beard' bottle opener medal and a bottle of Christmas spiced beer from the sponsor.
£1 from each entry was donated to two local charities. Pete's Dragon in Exmouth and CALM were the nominated charities. 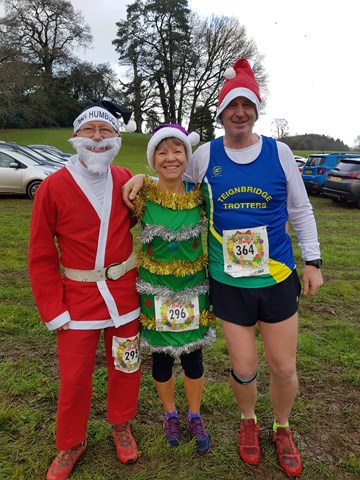 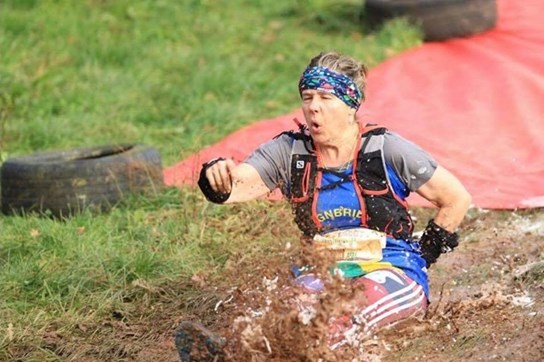 On Sunday 22nd December, Jolly Racing staged their second event of the weekend, The Escot Christmas Half and Marathon.

The route for both races took the runners around the spectacular grounds of the Grade 2 listed mansion house built in 1837. Each lap was 4.4 miles long, and for the very first time in a marathon, the water slide was utilised. A fun element indeed, but not mandatory! At the top of the slide was the “Jolly Gin Bar”, whereby runners could sample a small tot of Xmas mulled gin! Six tots possible for the longer distance event! Fancy dress was again an option, which added to the festive feel.

In the Half Marathon, three Trotters took their place on the start line. Josh Taylor, his Uncle Robert Faulkner and Laura Law all ran well, with Josh our leading Club runner. Josh finished 24th in a great time of 2:13:58. Rob battled on well to clock a time of 2:19:38 to gain 32nd place & Laura ground it out to claim 104th spot, having completed the gruelling course in 3:02:54. There were 158 finishers.

Kris Ward, who has run superbly well this season, and excels at this type of event, completed the tough challenge in 4:05:31 to finish 4th overall. Karen O’Brien and Suzie Mills rounded off the year with gritty runs. Karen clocked a time of 6:13:05 to finish 58th and Suzie took 80th position in a time of 7:11:08.

All finishers were rewarded with a festive medal, a Christmas muff, a candy stick and a handmade Xmas pudding made by the local ward winning Georgie Porgies Puddings.