First up, was the Dalwood 3 Hills Challenge.  Many races have a clue in the name, and this race is no exception.  The East Devon village organises this annual event of about 10-miles, which incorporates 4 (yes – 4) local hills.  As well as the hills, the ‘challenge’ is also in the form of many stream crossings, the last of which is at the finish line.  Storm Ewan made its presence felt, particularly as runners climbed the last hill and had to work hard to go forward, while being blown sideways.  96 entrants undertook the well-marshalled and well-marked route, and the post-run coffee and cake were also up to the usual high standard.

First Trotter across the line and 24th overall was Chairman Roger Hayes in a time of 1:27:01.  He was closely followed by Craig Churchill who finished in 1:28:16.  Third Trotter home in a time of 1:31:20 was Travis Wood, whilst Nigel Barnet and Jim Donovan crossed the line in 1:41:53 and 1:47:59 respectively.  Two female Trotters finished the race, both achieving their aim of finishing in one piece!  They were Sara Colman in 2:07:06 and Eleanor Taylor in 2:14:11. 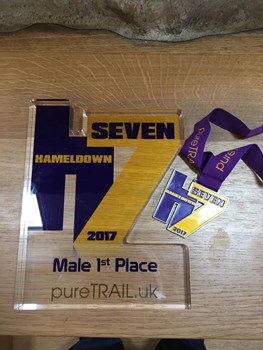 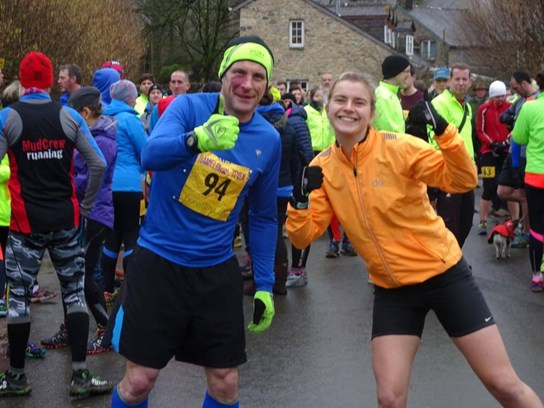 Geoff and Annabelle at Hameldown

Another tough off-road race was undertaken by Trotters on the weekend, with them running in the Hameldown Half Marathon and 7-mile races. Kevin Woodard commented: “It is the hardest race I've done to date as the wind whilst running up the hill was horrendous. It kept blowing us to the left at 60-70mph maybe more!”.  The race started off with a three-mile climb, and the terrain was tough and very boggy. It was tough finding any firm ground, and to top it off there were rocks to contend with.  There were 234 finishers and Trotter results were: Kevin Woodard (9, 1:51:28), Sam Riches (27, 2:03:29) and Paul Sharples (69, 2:20:19). This was Sam's first ever Half marathon, so he chose a toughie for his first attempt.  Well done, all.

On the same day, Geoff Davey took on the Hameldown Long 10K, and won the event in 58:25, finishing 6-minutes ahead of second place finisher.  Geoff was planning to do the Half, but decided to downgrade to the shorter 7-miler because he is trying to manage a leg injury and not interfere with his London marathon plans. 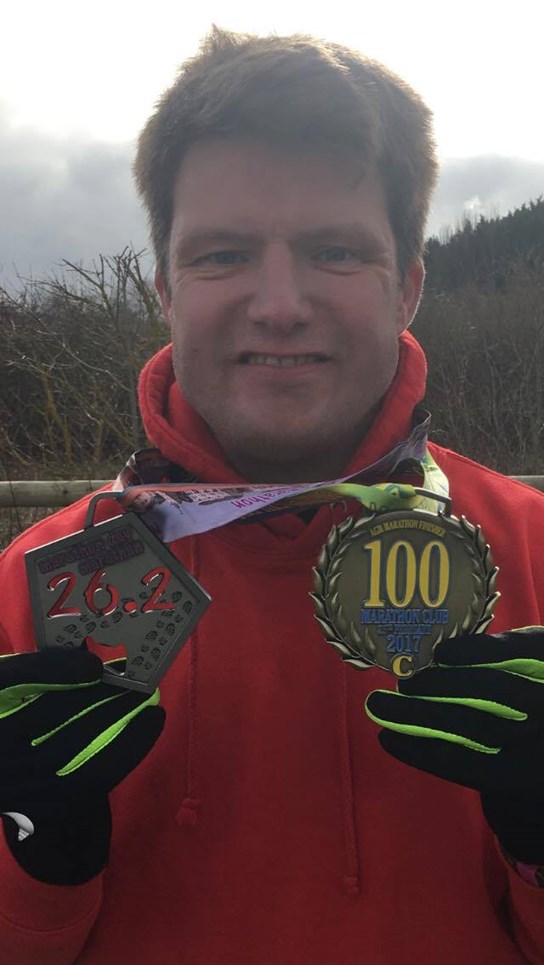 Richard with his medals from the weekend

Geoff was first male and Annabelle Evans was 2nd female, who is a second claim Trotter. Having only just turned 18 she is new to the club but also as a junior was established as a Newton Abbot athlete for her first claim. Similarly to Kevin, Geoff commented that conditions at the top of the Hameldown were nothing short of horrific, with strong winds and visibility down to 15m, and conditions were some of the worst that Geoff has seen (and he’s used to this type of route!).

Above are photos of Geoff and Annabelle and Geoff’s trophy.

Allen Taylor travelled on his own to Sandy Balls Holiday Park in the New Forest to compete in the Heartbreaker Marathon.

The route is predominantly on well-maintained forestry gravel tracks offering 2500ft of climb on a t-shaped course. The marathon uses out-and-back loops starting and finishing in Sandy Balls Holiday Park. Although a mild 11 degrees it was extremely windy and showers throughout.

Tracey Jolly competed in the Bournemouth 10 on Sunday, which is part of a series of three races to form The Imperial Series. This is the second race in the series, and Tracey was the Trotter there. Tracey finished the race in 1:44:12 for 383rd place out of 457 competitors.

The weather conditions were lovely for 5 miles but as the runners turned there was a strong headwind from the sea, and from mile 8 the rain was torrential too. Tracey ran well, getting PBs for 5k, 10k 15k and 10 miles. She was also over 10-minutes quicker than her time from Lytchett 10, set two weeks ago.

Richard Keatley did another double marathon on the weekend, with both days consisting of roughly laps of 12.96 miles. The course is at Betteshanger Cycle Track in Kent, and was run on a tarmac surface. Again organized by SVN, Richard loves their events and thinks the 5-hour drive is worth it.

Saturday was windy, although Richard felt quite good despite the wind, finishing in 4:26. Sunday came, and Richard took it a bit more easily, finishing in 4:56. This takes Richard’s total up to 8 marathons for the month, with him hoping to be on track to complete 52 marathons in 52 weeks.

Thanks to Eleanor Taylor, Tracey Jolly, Geoff Davey, Kevin Woodard, Richard Keatley and Marie Taylor for the reports. Much appreciated.