Teignbridge Trotter Pete Kirby ran in the England Age Group Masters team in the Chester Marathon on Sunday 7th October. He had qualified in the Vet 65-69 age group category earlier in the year.

The England team was made up of runners in various age categories from affiliated clubs. They competed against a Celtic team from Wales, Scotland & Northern Ireland.

Conditions were cold but dry on a course that included running across the England/Wales border. The course was mainly flat with a few hills towards the finish. 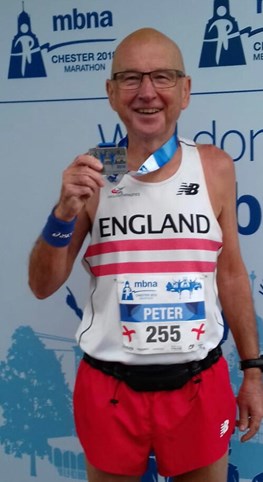 Plymouth Britain's Ocean City 10k was held on Sunday October 7th. 2595 runners negotiated an undulating course, suitable for runners of all abilities. An out and back course started on Armada Way in the city centre, before taking the runners out towards Cattedown, and along the embankment towards Marsh Mills. An about turn before repeating the route back to the finish. All roads were closed for the event & the runners were treated with some great views along the way. The weather conditions were just about perfect. The winner in a great time of 32:00 was Josh Trignell. First female was Marie Faithful in 36:12 to finish in 16th position. First Trotter home was Scott Wiggins, who finished 100th in a new P.B of 41:40. Scott beat his previous best at this event last year, by 1:00. Its turning out to be a great year for him, as he has also set new P.B's in the half and full marathon distances. Other Trotters finishing positions and times: Scott Knight (500, 49:35), Max Conroy (922, 53:40), Margaret Butt (1969, 1:06:25).

Margaret Butt ran as a guide runner in the race for Sophie Haidon. Margaret first guided for Sophie in last years Torbay Half Marathon, which by her own admission she hated. This experience hasn't put Sophie off continuing her training, leading to her entry into to days race. Sophie started off quite tentatively, as she took a tumble in training earlier in the week!! Sophies confidence grew as the race progressed, and with Margaret's encouragement, Sophie crossed the line in 1:06:25 and a new P.B!! Well done to you both. 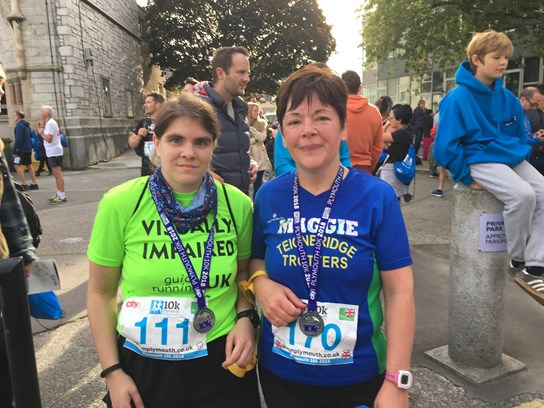 Sofie and Maggie at the Plymouth 10k. 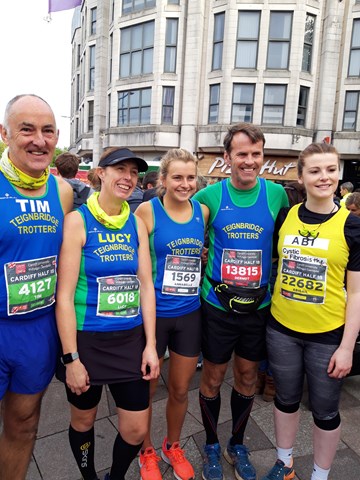 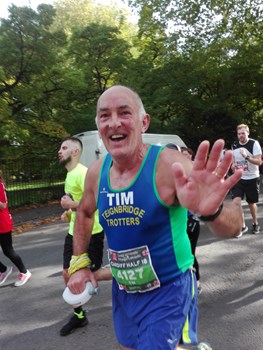 Sunday was also Burnham - On - Sea's Half Marathon. 229 athletes & charity runners competed in the annual race in perfect running conditions. The starting gun was fired at 11:00 am at Burnhams BASC ground, cheered on by a crowd of spectators. The runners headed off along the A38 towards Brent Knoll, then onto Lympsham before returning back to Burnham. The winner was Wayne Loveridge representing Chard Road Runners with a time of 1:15:26. Our only Teignbridge Trotter representative was Helen Anthony but what a remarkable performance she put in. With a time of 1:26:38 Helen smashed a long standing club record for the half marathon FV40, held by Linda West back in 1991. The previous record was 1:26:53. With this performance, Helen finished in 22nd position and 2nd in the FV35-44 category. Congratulations Helen.

On a really busy Sunday, Andy Distin ran the Bournemouth Marathon. The Bournemouth Marathon started in Kings Park before making it’s way down onto the seafront. The athletes continued to take in the beautiful coastal views as they hit mile 9 on the coastal marathon route. Standing mid way between Poole Harbour and Hurst Spit, Hengistbury Head forms the main division between Poole and Christchurch bays. The runners then turned west and at mile 14, they could see the famous Russell-Cotes Art Gallery & Museum which is situated on Bournemouth’s stunning cliff-top, over looking the sea. They then continued to run along the seafront, taking in the breathtaking Boscombe Pier, at mile 12 & 16. As they hit the iconic Bournemouth Pier for the second time, they knew they were on the home stretch. The Pier was first constructed in 1856. The Pier has undergone numerous transformations over the years, with the addition of the Bournemouth Pier Theatre in 1959. The athletes then ran west towards Lower Gardens at mile 18, before heading towards Poole’s Natural Harbour which is the largest in Europe. The last few miles took the field along the stunning sea front before finishing in Lower Gardens.

In perfect weather conditions, Iain Trickett won the marathon in a time off 2:25:45. Andy started well and felt comfortable, latching onto a Storm pace runner. At 22 miles Andy hit 'the Wall', but with true grit made it to the finish in a great time of 5:47:59 to finish 2035th. 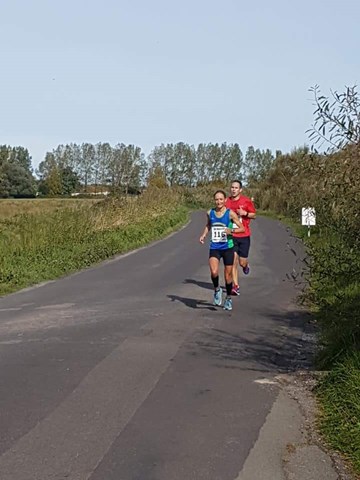 Helen on her way to new FV40 half marathon club record 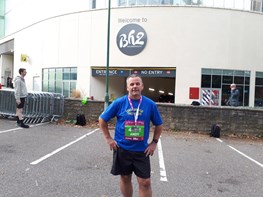 Derek Skinner travelled across the Irish Sea to run in the Enniscrone O'Duohda Challenge in a coastal town on the Atlantic coast in County Sligo.

There were 4 distances to choose from, but the marathon was Dereks choice. The race was run in terrible conditions with a howling wind and heavy rain. The profile was fairly flat and runners had to complete two loops. It proved tough for all the runners.

Derek finished with a time off 3:42:16, and is the first Teignbridge Trotter to take part in the race!! Derek said, it felt like a little 'Irish Race'. 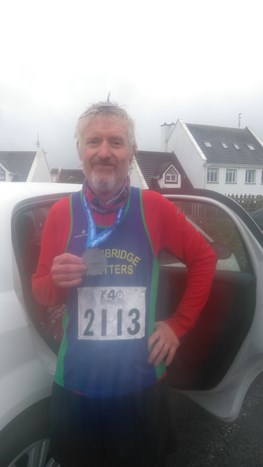