A variety of races over a busy weekend, and a club record is broken

There were two half marathons over the weekend, with Trotters taking part in both days. It’s known as a quick course, taking in the cycle paths and footpaths around the River Exe and Exeter Canal.

Jamie Barnett did the Saturday event and managed an incredible 1:12:12 for first position. Jamie has high hopes for later in the year, so this is a great indicator of how well he is running. Tracy Elphick and Bon Rymel also did Saturday’s event finishing in 1:34:55 (59th) and 1:49:34 (124th) respectively. There were 205 finishers.

Mandy Wheeler and Helen Anthony completed the Wiltshire 10 Mile race on Sunday 11th February. The route follows a gently undulating course through rural Wiltshire and loops around the historic village of Lacock before following the River Avon back to the finish in Melksham.

The morning of the race was dry but cold and blustery, although it was a good atmosphere and well attended with some fast runners. Helen Anthony ran 1:06:15 (44th) and Mandy Wheeler did 1:08:49 (67th), which was a PB and also a V45 club record. There were 504 finishers.

Graydon Widdicombe and Mark Wotton represented the club at the Humdinger Half, in Taunton on Sunday 11th February.

This is known as a challenging route with over 1000ft of ascent, but the course is a beautiful one ran along country roads taking in part of the Quantock Hills. 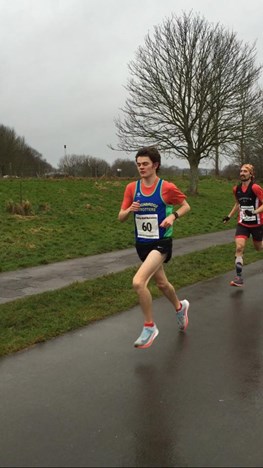 Jamie on his way to a race win 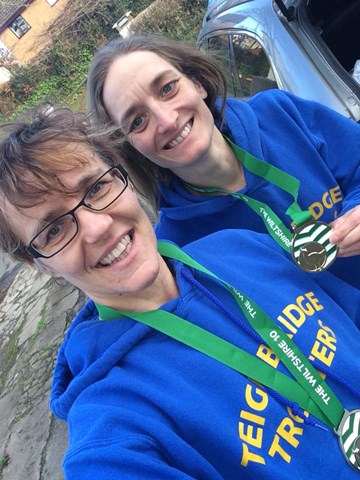 The race started in cold conditions with snow in the air, but part way through the race the sun came out although it remained cold. The first half of the race is predominantly uphill including some very steep ascents in parts, with the second half of the race downhill, including a mile long very steep descent to test the quads of the runners.

The race was really well organised with a very friendly atmosphere, and runners earned a unique fluted glass medal, along with a T-Shirt.  Graydon Widdicombe finished in a pleasing 1:40:44 for 48th position, whilst Mark Wotton managed 2:12:24 for 154th. There were 187 finishers.

In very tough conditions, Dartmoor held no mercy with lots of mud makibg running impossible in places. The trio stuck together with a couple of other running buddies, as due to the conditions they wanted to make sure everyone finished safely.

It was a well-organised event and an interesting route with a range of terrain and some epic climbs. It started near Widecombe in the Moor and headed out to the back of Haytor, around to Manaton and back to Widecombe. Unfortunately, the conditions meant that the views couldn’t be admired, but the trio finished in 3:45:48. Additionally, Paul Sharples took on the 30-mile ultra at the event, finishing in about 6:32. 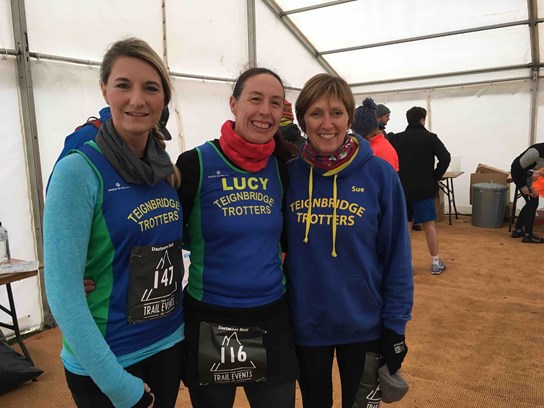 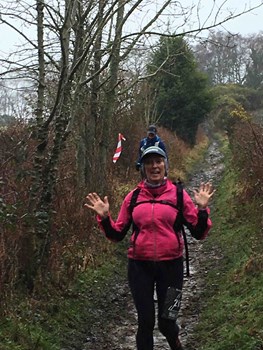