Graydon Widdicombe completed The Great Bruges Marathon on Sunday 21st October, making it his 50th official marathon finish, so therefore qualifying him for “wannabe” status of the 100 Marathon Club.

Graydon knows the Belgian city well, so was really pleased to make it his 50th, although to do so did require squeezing in one or two extra events in the lead up, due to missing another event because of illness.

Bruges is a great city, and the race itself started and finished in the historic and incredibly picturesque city centre. In only its second year, the marathon attracted approximately 2000 runners to the flat and fast course, which takes runners out to Zeebrugge and back, before finishing under the medieval Belfort tower in the market square. There was also a half marathon and a family run/walking event on the same day. Graydon really enjoyed the race and in perfect running conditions was pleased to squeeze under 3:30, with an official time of 3:28:35.

The race started and finished at Tilsey Park athletics track. The route took the runners on a two lap route through the town centre before passing through the villages of Drayton, Milton and Sutton Courtenay, before returning back through the town , finishing in front of the grandstand inside the stadium. The course was flat and fast, ideal for PB's, and the weather was perfect. Lance finished in 244th place in a fast time of 3:15:47. There were 746 entrants.

The Great South Run took place on Sunday, the worlds leading 10 mile running event. A fast and pan flat course took the runners through the iconic sights of Southsea and Portsmouths historic Dockyard, home of HMS Victory. The runners passed the Spinnaker Tower before finishing on Southsea seafront with great views of the Isle of Wight.

The weather was just about perfect for the participants with dry, cold and breathless conditions. Four lady Trotters took part in the race and what fabulous performances they all put in. Both Mandy Wheeler and Jacki Woon broke club records for their respective age categories. Mandy clipped 1:53 off the previous FV45 record, and Jacki smashed the FV55 record by 15:41,held previously by Sally Ingledew. They also both finished 2nd in their age group categories in a field of over 25,000. Fantastic achievements from the two Trotettes.

The Plym Trail Autumn Marathon double took place this weekend, organised by First and Last Running. There is also the offer of a half marathon distance. The Plym trail is situated within an area of outstanding beauty within the Dartmoor National Park. The runners would enjoy stunning views of the forests and valleys. Formerly an historic railway, the area is enjoyed by runners, walkers and cyclists.

On the Saturday, Allen Taylor won the race in 3.15.36, with Kris Ward finishing second in a new PB 3:17:10, knocking off seven minutes off his previous best. On day two, Allen refreshed from a good nights rest, finished in 2nd place in a time of 3.24.23.

Josh Taylor ran the half marathon on the Sunday and finished in 3rd place in 1.47.26. A very successful weekend for the Taylor family!! Richard Keatley completed his 104th marathon. He is relentless!!

This weekend was also the Amsterdam Marathon. Hannah Jones and Kurt Read made the journey but were unaware of each others entry. An amazing city with all the attributes required to hold a marathon. The weather conditions were perfect with hardly a breath of wind and the temperature was around 11 degrees. The course is almost pancake flat, and at certain parts of the course you run below sea level.

Hannah was hoping to set a new PB targeting a sub 3:30. It was while Hannah was quite happy trotting along the banks of the River Amstel at around halfway when from behind she got a call 'hello trotter' and Kurt Read appeared!! They shook hands, had a quick chat and after short while Kurt pulled gracefully off into the distance.

The route after leaving the Amstel meanders its way through the industrial part of Amsterdam, before turning and heading back to the city, along the bank of the Lozingkannal. As Hannahtracked back through the city, she caught sight of Kurt and the famous trotter vest and slowly caught him up, with words of encouragement he sent me on my way.

Hannah and Kurt both crossed the line in under 3:30, with Kurt running his 3rd marathon in as many weeks, finishing in a time of 3:29:43. Hannah smashed her previous best by over 20 minutes crossing the line in a great time of 3:25:50. Hannah said she would certainly recommend this marathon. Its a great route, good support and the Dutch are very friendly people. There were 12,128 finishers. 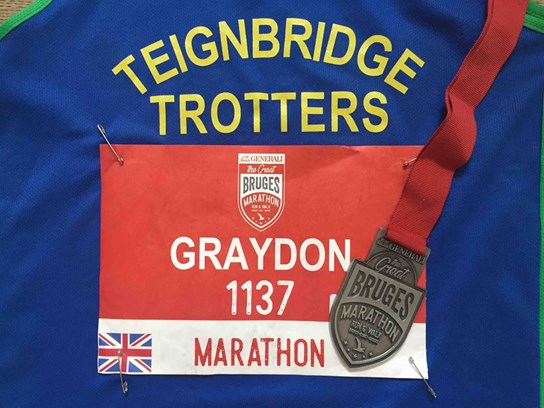 Graydon's half century at Bruges 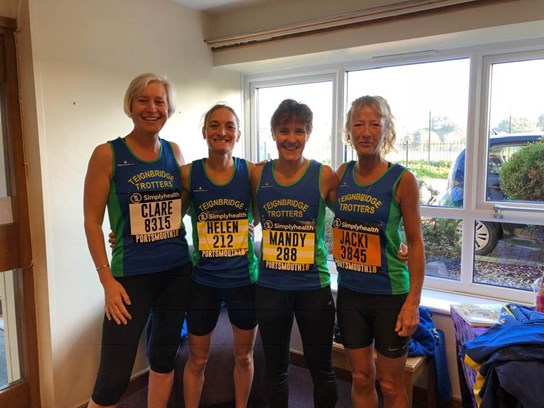 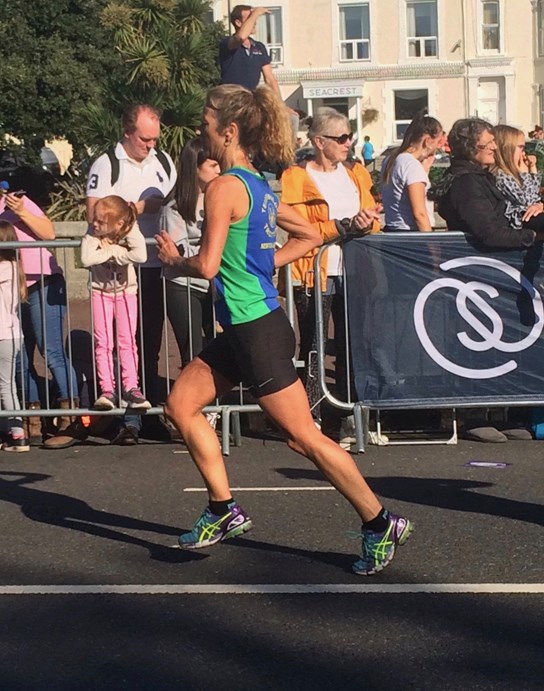 Jacki on her way to setting another new club record 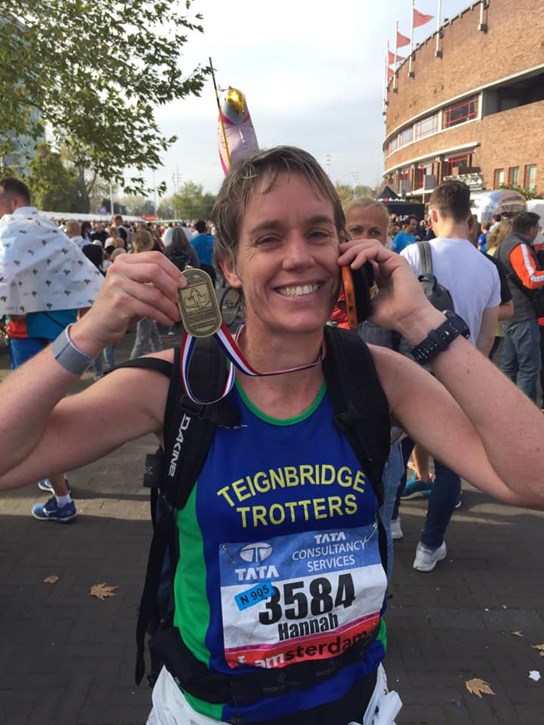 Hannah all smiles after smashing her marathon PB