The 6th and final round of the Exe 5K Series took place on Tuesday 10th September.

The race started and finished at Exwick Park, and followed paths and cycle tracks alongside the canal, on a two lap loop. The weather conditions were just about perfect for this fast and furious race.

Jamie Barnett was in pole position going into the deciding race. Although Jamie is still on the comeback trail after injury, he still managed to clock a great time of 00:15:57. Jamie finished 4th on the night, but won the series by just 8 seconds from Sam Hopton, with the best four race times to count.

Unfortunately, Rachel & Matthew Steele, as well as Bob Small, who were in contention in their respective age categories, but other race commitments meant they were unable to cement their positions. 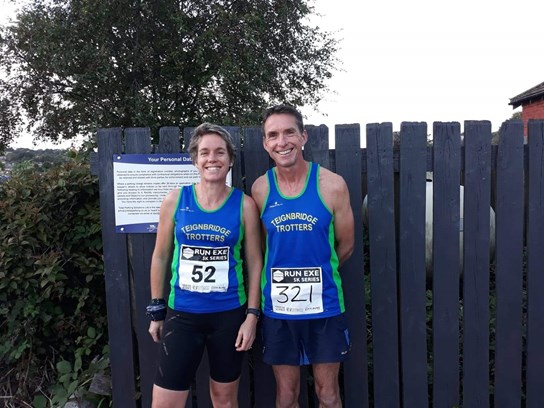 The Purbeck Running Festival took place over the weekend, with race distances at 5k, 10k, 16 mile, marathon and Ultra.

The 16 mile race, although a little longer than this, started and finished in Swanage. The route led the runners from the Downs overlooking the beach, before heading towards Durlstone Country Park, leading onto the Jurassic coast path. The runners than ran through the villages of Worth Maltravers and Kingston. At this point the course split from the Marathon and cut across heath land towards Corfe Castle, before joining the marathon route on the common. The runners then headed back to Swanage, finishing on the seafront.

The race was a tough challenge, with tough climbs and uneven paths to negotiate. The views were spectacular, overlooking Portland, Poole Harbour and the Isle of Wight. 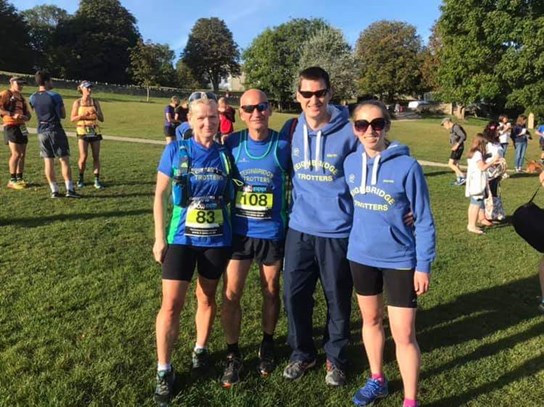 Joanna & Martin Randall ran together and clocked great times whilst pushing each other. The couple’s times were 2:40:24 to finish 42nd & 43rd respectively.

The winner was Alex Van Tuyl, representing Clapham Chasers. His time was 1:49:38. There were 187 entrants.

The marathon, but actually measuring 27 miles, headed out to Swyre Head once having passed through the village of Kingston. The marathoners then passed Heaven’s Gate and along the ridge towards Tyneham Cap. The runners then left the coast path and ran past the deserted village of Tyneham before continuing up the ridge of the Pubeck Hills and onto the 11th Century Corfe Castle. The runners then headed back to the finish line at Swanage.

Graydon Widdicombe trailed to Windsor for a midweek marathon on Thursday 12th September.

Excellently organised by Running Miles, the Kings of the Castle event was actually a 6hr timed event, where runners could do as many laps of the flat 5.25-mile out-and back route as they wanted for the 6hrs. Graydon just settled for the marathon equating to 5 laps.

The route was a picturesque one, taking the runners alongside the Jubilee River, with Windsor Castle in sight for part of each return leg. Also, the terrain was good in that it wasn’t muddy, but the crushed stones was fairly hard on the legs, and although not too hot, the temperature did slowly warm throughout the event. These are very social, low key events and the stack of chocolate in the goody bag at the end always helps as an incentive too. 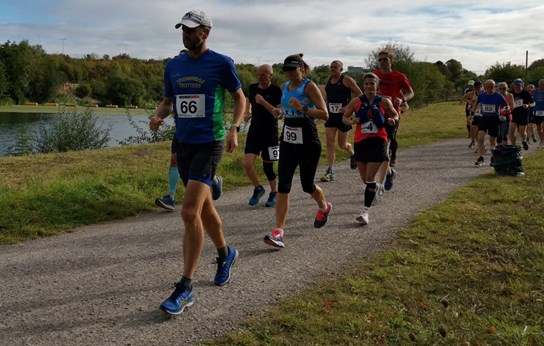 Graydon Widdicombe competing at The Kings of the Castle Marathon 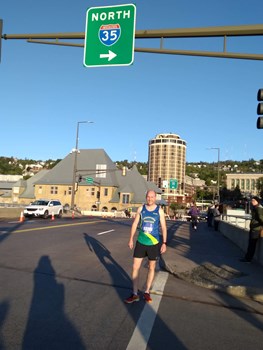 Julian Skanes in Minnesota with a belly full of pancakes and beers!

Julian Skanes, who was in the States holidaying, managed to find a 10K road race in Minnesota. The race was the Duluth Minnesota Tunnels 10k, and gave runners the chance to run on a Minnesota Interstate Highway through 6 tunnels and with live music.

A closed course allowed the start to be on the north bound side of I-35 just south of the 5th Ave overpass. At mile 3 near 26th Ave E., participants make a legal U-Turn and headed south to the 5th St. exit and continue to the finish line alongside the famous William A. Irvin, a retired lake freighter.

Julian didn’t let the new diet of pancakes and beer deter him, as he ran a superb race to finish 8th overall. His finishing time of 00:41:42 also won him the MV50 age category award.

Both races were run on trails around the Heath, combining steep ascents and fast descents. The weather was very warm at race time. 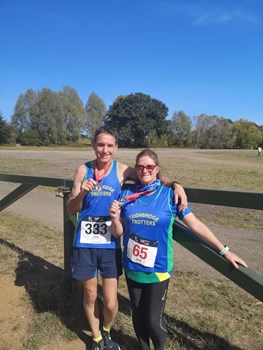 This was the 29th running of the hugely popular race. The weather Indian summer temperatures were not conducive for fast times!!

The race started near Millenium Square and the route passed areas including the Clifton Suspension Bridge, Shirehampton and the city centre, before finishing by the Aquarium 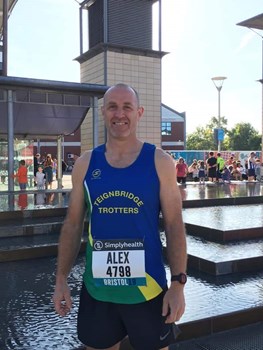