Trotters were well represented at the Braunton 10 mile road race at the weekend. Hosted by North Devon Road Runners, the Braunton 10 is one of NDRR's oldest races and one of their most popular, with two infamous climbs designed to test the legs and spirit of participants!

Paul prepared for Braunton by joining five other Trotters taking part in Honiton Running Club's Blackdown Beast on Saturday. This annual event is strictly a run as distinct from a race, as those taking part don't wear numbers and there are no placings or prizes. The route is not marshalled, so runners navigate by following printed instructions given out at the start. Runners start in Dunkeswell near Honiton and follow a picturesque, and at times muddy, cross country route of about seventeen miles around the villages of Smeatharpe, Upottery and Luppitt before heading back to Dunkeswell. At the 7.6 mile mark they all stop (at Smeatharpe Village Hall) to check in and refuel with a hot pasty and mulled cider - this makes the remaining nine miles seem really easy ...allegedly! Other Trotters braving the Beast were Helen Anthony (who jointly led home the field of 180 runners, in 2hrs 33min), Matthew Dunn, Emily Levey, Sue Tremlett and eventually Keith Anderson.

There has been no let up for marathon man Richard Keatley. For Richard the weekend started with an early drive to Rochester in Kent for the Ranscombe Challenge, comprising six laps of off-road trails around fields and woodlands. The pleasant sunny weather was in contrast to Sunday when Keatley had to endure freezing conditions at the Pegwell Bay "Freezing cold conditions so that apparently my hair was covered in ice! And the water provided had ice in it. It was cold and minus something for most of the day, with real thick mist the whole day and you couldn't see far at all," said Richard. This represented marathon number 40 in Richard's quest to reach the magic 100 mark. Now he has a couple of weeks' rest before pressing on again with a quad (Quadzilla?) next month. 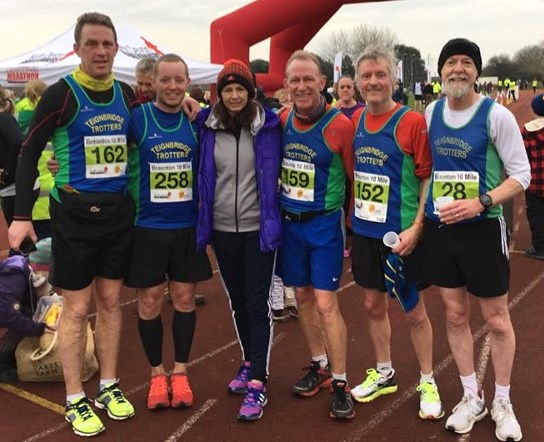 Jo Pavey mixing it with the elite 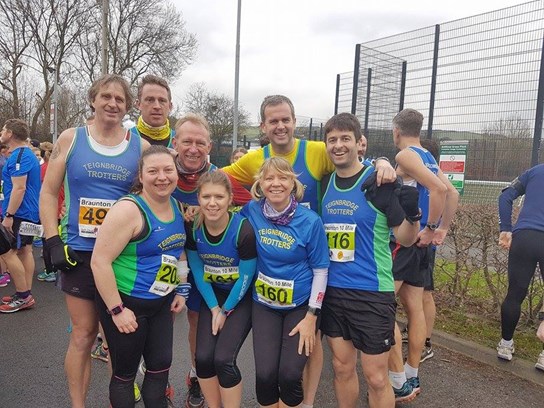 Before the off at Braunton 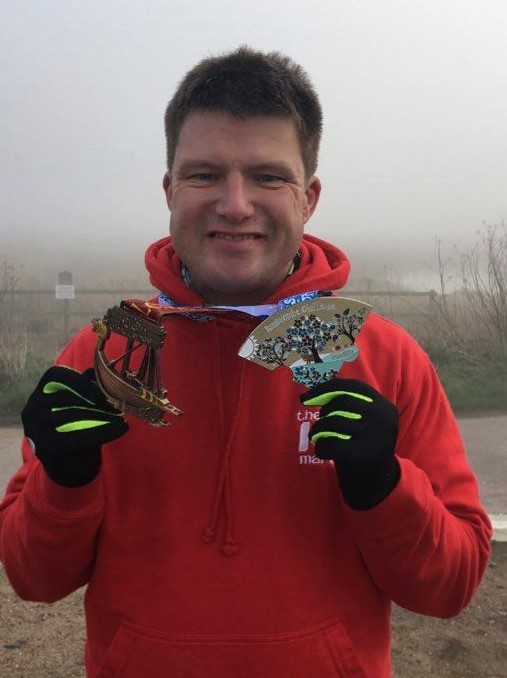 What does he do with all his medals?