The Therme Manchester Half and Marathon took place on Sunday October 10th. This was the first time both races have taken place at the same time.

The Marathon is the second biggest in the UK and 4th largest in Europe. Launched in 2012, this marathon has received rave reviews from previous participants for its professional delivery, fast flat route and the amazing crowd support around the course, with live music, DJ's and bands creating a fantastic atmosphere.

This year’s route has been changed. Starting close to Old Trafford, the runners ran into the city centre passing iconic landmarks such as the Beetham Tower, the Free Trade Hall and the Midland Hotel. Then on past the Quacker Meeting House, and then into Albert Square. At this point the runners headed back towards the Red Devils ground, before the 5 mile stretch down Chester Road. A loop around Altrincham town centre proceeded where the atmosphere really ramped up. The tiring runners then ran back towards the finish, passing Brooklands, Chorlton-Cum-Hardy to the finish line on Talbot Rd through Seymour Grove. 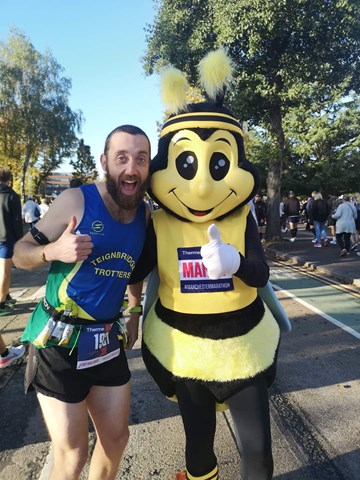 Joe buzzes around streets of Manchester

Four Teignbridge Trotters travelled north to compete in this huge race. Joe Hornsby ran a remarkable race, setting a new personal best by a staggering fourteen minutes? Joe clocked a great time of 03:00:03, just missing out on the magic sub 3 hour barrier. This will surely come in the very near future.

Rachel Steele, still recovering from London the weekend before, ran a very respectable time considering how tired she must have been feeling? Rachel clocked a time of 03:55:41. 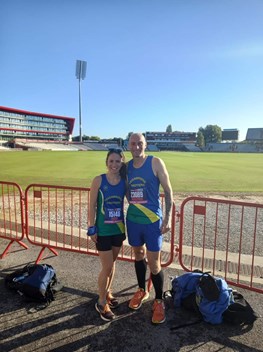 Debbie & Ben on the boundary at Old Trafford 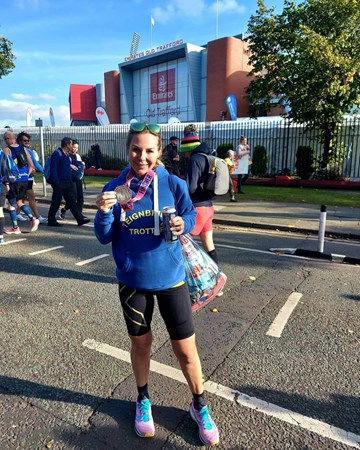 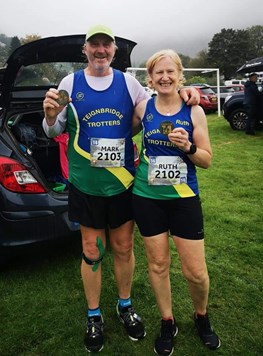 Mark sets off around Coniston water

Mark Wotton and Ruth Johnson spent a few days in the Lake District this week climbing mountains and fells, before taking part in the very popular Coniston 14 road race. Billed as one of the most picturesque road races in Britain, the hilly route followed the road that circled Coniston water, with some stunning views of the surrounding mountains.

This was the 39th running of the race, which was first held in 1982, and since 2004 has raised over £200,000 distributed amongst many local charities.
On a humid misty October morning, the runners set off at 11:00 am from John Ruskin School playing fields.
Ruth and Mark were feeling the effects of their previous days exploits but still managed to negotiate the challenging route, especially the Brantwood Hills between miles 10 to 12.

Ewan Walton competed in the JP's Exe to Axe as a solo runner on October 10th. The 22 miles followed the coast path from Exmouth to Seaton and was staged by Sidmouth Running Club. The event could be run as a solo effort or in a relay team of four.

Ewan took part in the inaugural event in 2004, which was named Axe to Exe, but has been Exe to Axe since 2005. This was Ewan’s first appearance since the 2004 event. Landslips and subsequent rerouting, have resulted in the race being 2 miles longer than it used to be!

The race started on the seafront at Exmouth and passed the Geo Needle at Orcombe Point and marks the start of The World Heritage Site that the runners would run through. Having travelled 4 miles, Budleigh promenade was reached. The next 6 mile stretch included negotiating the River Otter before dropping down into Sidmouth by way of Jacobs Ladder. The views were outstanding on this leg. The next stage was a 6 mile tough chiefly uphill jaunt to Branscombe Mouth, climbing Salcombe Hill for starters. The final 4 miles took the runners onto Seaton. This was the only part of the course where each runner could decide which way to go! The choice was to climb the grassy slope to the top of Hooken Cliffs or take the lower path followed by steps? The former choice offered scenic views and

was considered the quicker option. The route continued through the pretty village of Beer, before a nice downhill to the finish at the Axe Valley Sailing Club on the esplanade at Seaton seafront.

Ewan completed the tough challenge in 03:46:11, placing him in 27th position out of 151 solo runners Ewan was happy with sub 4 hours as he haven't trained for this kind of event. He just fancied testing himself?

The event was very well organised, with very friendly and supportive marshals. There was a great atmosphere, on a very warm day. A dip in the sea afterwards was a real treat. 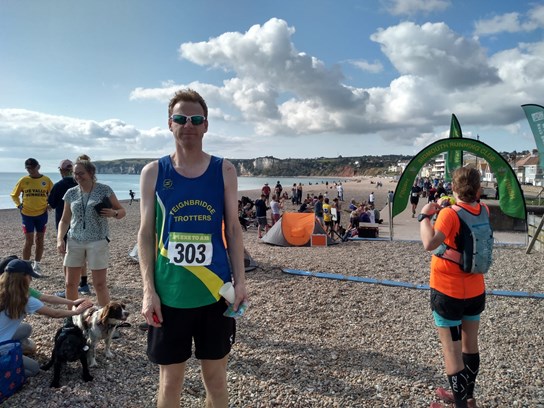 In the men's race, Chris Broadbent and Alex Lyons lined up for the Trotters. Both ran solid races for inexperienced cross country runners. Chris led the duo home, clocking a time of 00:40:09 to finish 91st & Alex crossed the line in 129th spot in a time of 00:46:06. There were 140 finishers. 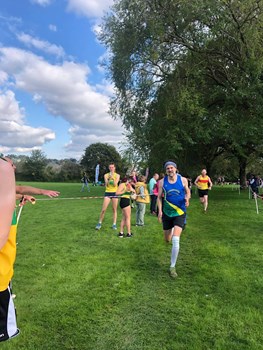 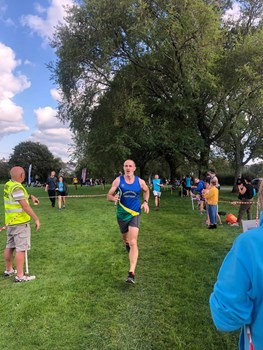