Julian Scanes travelled with his wife, to the Costa del Sol in Southern Spain to take part in the Zurich Malaga Marathon. The Half & Marathon races were held on Sunday 12th December, with blue skies and warm temperatures on race day. The Marathon was an IAAF Bronze Label race.

The relatively flat course took the runners through some of the most beautiful parts of the city. The Alcazaba Moorish fortress from the Islamic era, the Roman Theatre or Castillo de Gibralfaro. were just a few of the city’s land marks that the competitors passed.

Julian has been striving to run under the magic three hour barrier for the past 18 months, and although his times have edged closer, Julian’s target time was always just out of reach, until now?

Julian felt good having put in a good block of training leading up to the big day. As the race progressed, it was evident that Julian was in good form, passing all his splits ahead of schedule. He went through the half marathon point in 01:28:52 and from there on in, picked up the pace to smash his own personal best while clocking a superb time of 02:56:44 to finish 203rd. Julian lowered his previous best Marathon time by 05:07 seconds. An outstanding performance to end Julian’s 2021 with a bang. A few beers in a local Malaga bar followed to celebrate! 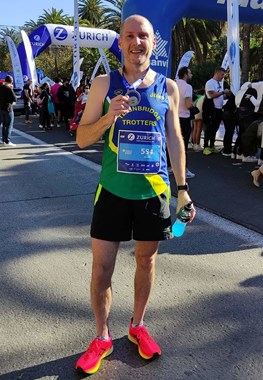 Julian with his well deserved medal

Julian on his way to a superb personal best Marathon time

Three of the Teignbridge Trotters most experienced Marathoners took part in this popular event. The weather conditions were perfect, due to the mild temperatures and little wind.

Situated on the edge of Dartmoor, the start took place at Clearbrook Village Hall. The runners set off with a short loop of the village, before heading down Cycle route 27 towards the outskirts of Plymouth, before climbing back towards the finish at the village hall. Marathoners had to complete this loop twice! 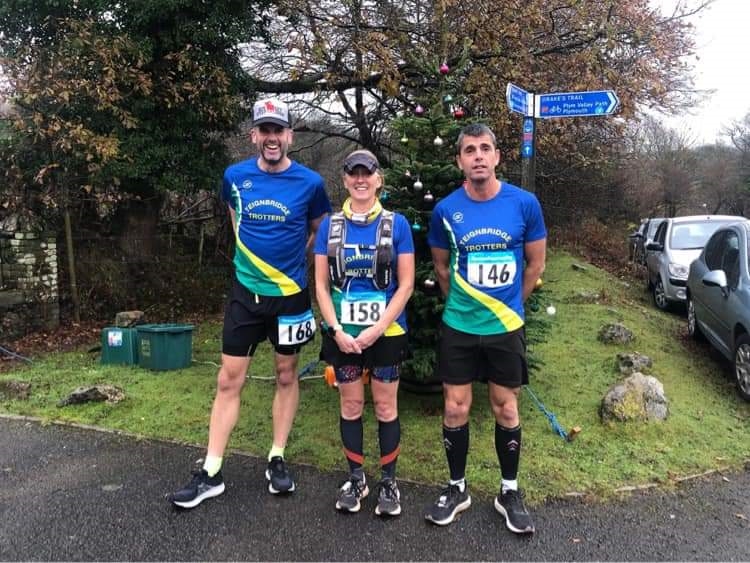 Graydon, Sue and Roger find time for a team photo