It’s been said that what you do in the dark will eventually come into the light.

It can be true of running: the long winter months of wet weather or cold conditions can obscure our motivation. The seductive duvet of down-time calls our names like mermaids lulling sailors into unknown depths - except our fate is not the briny deep, it's doughnuts and muffin tops.

This weekend one Trotter’s dedication to training - the coal-black nights driving the legs up and down Humber Lane - shone like sunshine. Kevin Woodard smashed his personal best at the Exeter Half Marathon on Saturday 13 February.

Two races of the same distance were held on consecutive days with Saturday generally reserved for competitive runners with a cut-off time of two hours. The three lap traffic free, flat, race runs along footpaths and cycle tracks around the River Exe and Exeter Canal making it ideal for those seeking a personal best.

*Jon Oxley and Oli Prouse took part in the Haldon Night Run, part of the Wild Night Run race series. Held under a canopy of stars the 10k started and finished in the main car park at Haldon Forest Park and picked up well worn undulating trails with some testing ups and downs. Oli finished in 77th place in 1:00.18 and Jon completed it in 1:04.35, 102nd. There were 134 runners.

*Sunday 14 February saw the Trotters out in force to oversee proceedings for the Newton Abbot leg of the Westward Cross Country League 2015-16. Team Teignbridge laid on marshals, catering teams and race direction while a few took a deep breath and ran it.

In the U17 and senior ladies race Hylda Stewart continued to show her technical skills at this type of race picking off competitors with a strong time of 26.59. Wonderwoman Tina Caunter took a break from her catering duties to clock 28.19 and was closely followed by Eleanor Taylor in 28.22. Kathryn Steemson ran a time of 29.06 and Sara Collman finished in 29.31.

Don't forget it's the Annual General Meeting on Wednesday 24 February. This time it's at 8pm at Teign School. There will be reports from the big important committee types about the club and we also get to vote for who we want to represent us on the committee and other important Trotter-type things. We may also hear the answer to the conundrum: 'what's the difference between an AGM and an EGM?' That's important too and Stewart Dunn has the answer. 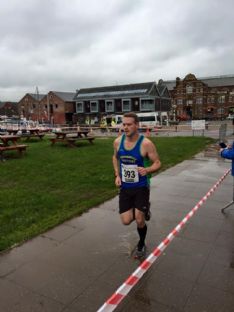