On Saturday 23rd February, Looe Pioneers Running Club hosted the 7th running of the 2019 Looe 10 Miler. The traditional Sunday morning race was switched to a Saturday afternoon start at 1-30pm.

This year’s race was aimed at helping raise vital funds for the Cornwall Air Ambulance’s ‘New Heli Appeal’. £2.5 million needs to be raised by April 2020 to purchase the new aircraft, which the county are in desperate need of. Each entry included a £2 donation to the appeal, and the entrants were encouraged to raise sponsorship to support the campaign.

The race is an open event and is also part of the Cornish Grand Prix series, which attracts hundreds of runners from the South West and beyond.

The course is an undulating run through West Looe, and then onto the coastal road to Talland. A loop around the Killigarth, Porthallow area brought the runners back down to Talland,before the return leg back to Looe.

Weather conditions at start time were just about perfect, with overcast and mild temperatures. The runners set off from Millpool carpark, helped on their way by the vocal support around the start line. The total elevation of the route was over 1600 feet, and some runners described the route as ‘hellish’.

The winner of the event was Tony Brewer representing the Mile High club. Tony clocked an impressive time of 1:01:13, closely finished by Jim Cole in 1:02:07.

First female to cross the finishing line was Claudia Serien from Team ‘H’ posting a great time of 1:16:00.

The Teignbridge Trotters first runner home was Bon Rymel. Bon finished in 143rd position in a very creditable time of 1:28:37. Well done Bon. The other Trotters times and positions were:

A disco and band took place that evening, at the Tencreek Holiday Park. Admission was free, but donations to the appeal were again encouraged at the door.

The event was a resounding success, with over £1400 pounds raised, with the online entry donations still to be counted. A big well done to the Looe Pioneers Running Club, for organising such a great event, and for all the money that they have helped raised for the Cornwall Air Ambulance appeal. 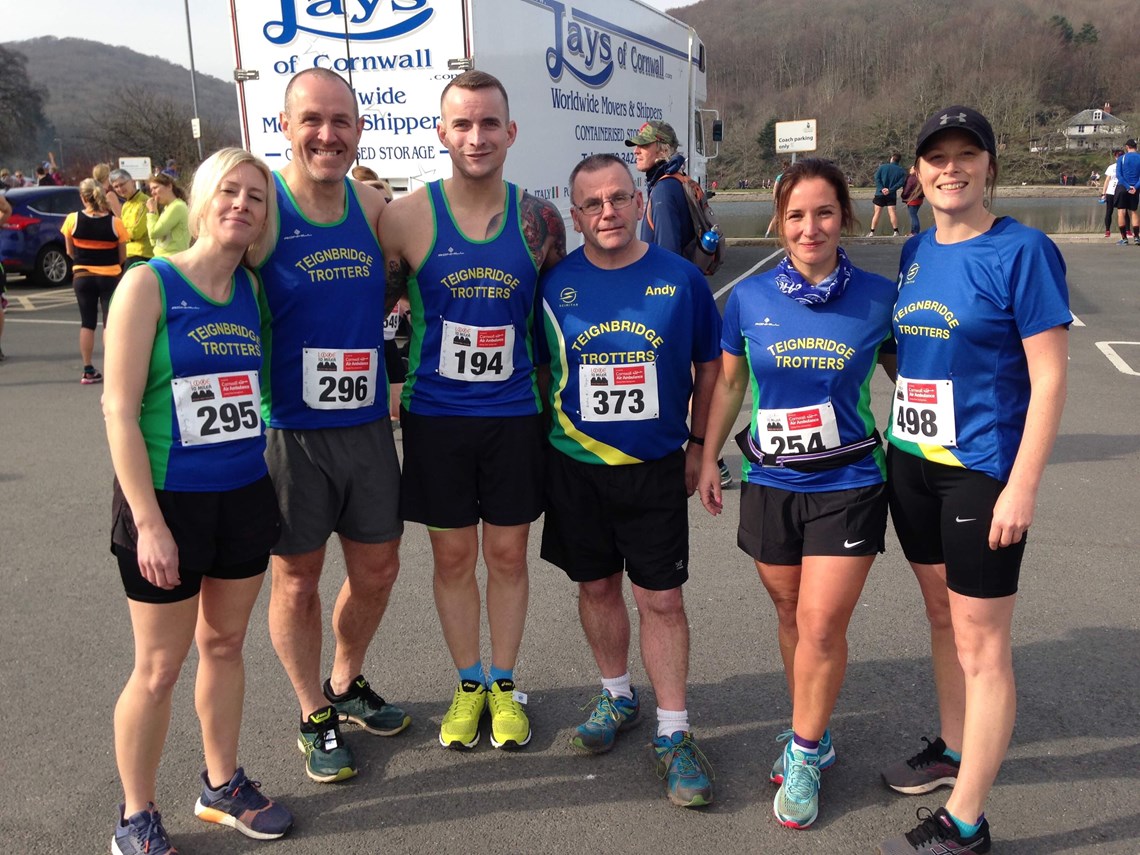 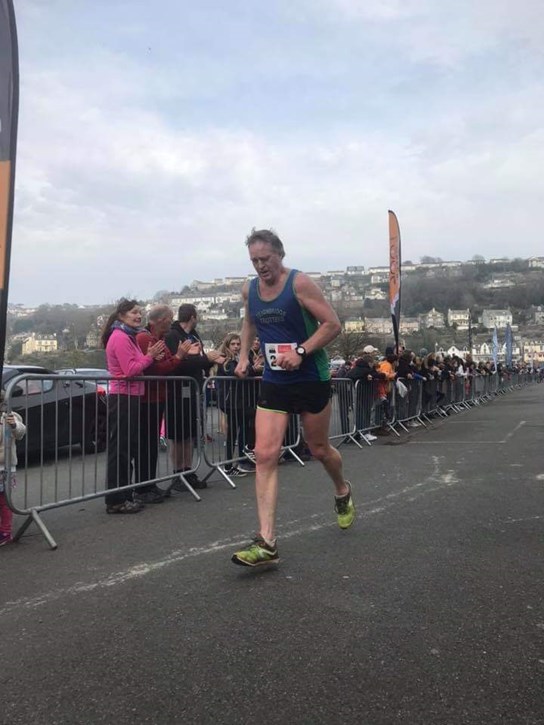 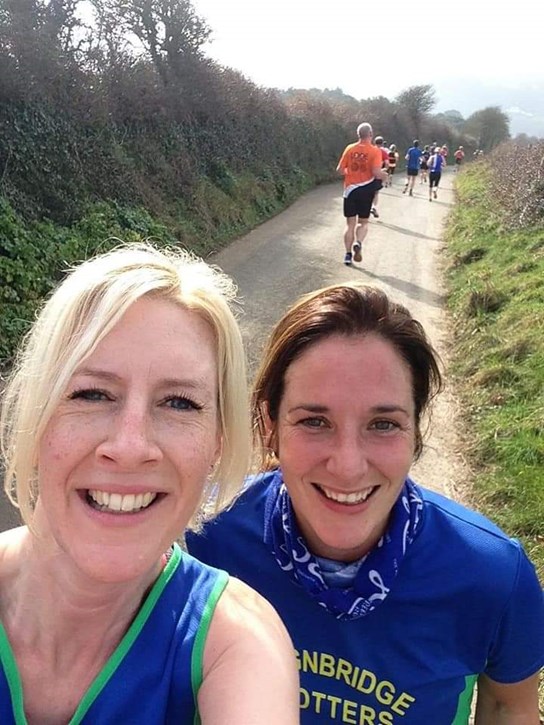 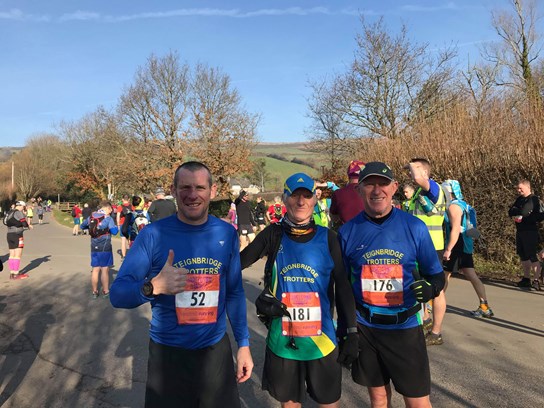 Geoff, Derek and Paul get hammered!

On Sunday 24th, five Trotters travelled to the village of Widecombe-In-The-Moor to take part in the Hameldown Hammer 13.2 miler and the Hameldown 7Even miler.

These races were organised by Puretrail Running, and this was the 4th time this event had taken place. Our Teignbridge Trotter representatives were Sharon Still, Geoff Davey, Derek Skinner, Paul Sharples and Craig Churchill.

The races started and finished at the village at the foot of the Hameldown ‘massif’, and is surrounded by some of Dartmoor’s most iconic granite tors.

Both races are tough, challenging trail affairs and is a serious test of endurance. The Hammer has a total ascent of over 600 metres. It was 98% trails, over a series of well defined, grassy, rocky and sometimes muddy tracks, and through forestry glades. More significantly, there was a double ascent of The Hameldown Ridge!! The ‘Hammer’ rises high and steep affording spectacular views of the Moors and Tors.

The 7Even mile race route exceeded over 300 metres of ascent and still included the double ascent of the Hameldown Ridge.

There were two drink stations sited at Challacombe Farm and Natsworthy Gate.

The winner of the 7Even miler race was Liam Lindon, clocking an impressive time of 59:35. Craig Churchill and Sharon Still both ran great races. Craig finished in 14th spot in 1:11:34 and Sharon Still ran a gallant race to clock a time of 1:48:24, to finish in 92nd place. There were 108 runners. 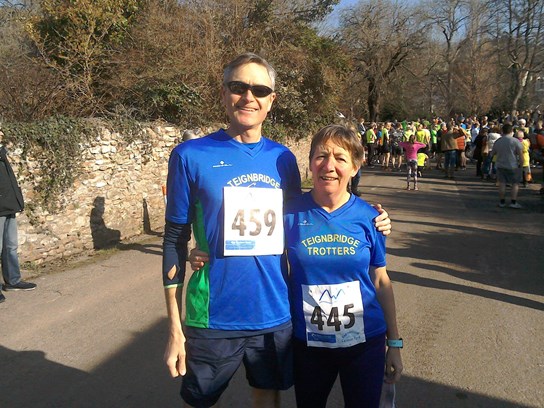 Eleanor and Gavin before taking on those hills!

The Dalwood 3 Hills Challenge, a 10 mile multi-terrain, took place on Sunday 24th Feb. Eleanor Taylor and Gavin Parrott made the journey to the venue. Dalwood is situated between Axminster and Honiton and is organised by Axe Valley Runners. Over 1500 feet of elevation is what the runners had to endure, through scenic East Devon country roads and fields. Oh and 4 miles of hills!!

The route was roughly a figure of 8, where the first loop was a warm up before the challenge of the second loop.

The weather was quite warm which made the already tough race even tougher!!

James Green representing the home club, won the race in a time of 1:08:50. There were 97 finishers.

Rachel Pallant travelled the short distance to Exeter on Sunday, to take part in the 10k race held. Rachel was surprisingly our only club representative, but she wore her new vest with pride.

The mainly flat course, started and finished at The Quay. The runners ran 2 laps of Duckes Meadow and the Riverside Country Valley Park. This race is great for encouraging beginners and for runners chasing personal bests.

The winner of the event was Peter Monaghan clocking a great time of 34:36. Peter runs for Torbay AC. 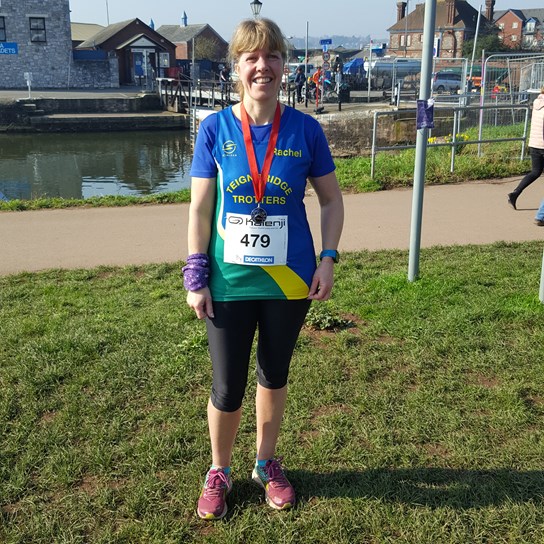