A hot weekend of racing for Trotters

A large team of Trotters travelled to the Lustleigh Show, to take part in the event’s 10K race, situated on the edge of Dartmoor National Park.

The show itself was fantastic, with a large range of stalls selling locally produced food and drink, a dog show (with various prizes up for grabs including "Dog with waggiest tail" and "Dog with the Most Beautiful Eyes"), and lots of other attractions on offer throughout the day.  There was even a Red Arrows fly by for the event, which amazingly is in its 130th year.

The route of the race is renowned locally as one of the most challenging multi-terrain courses in the local running calendar.  The course takes you over hilly lanes, down muddy tracks, through beautiful woodland, along the river Bovey before spitting you out into the village of Lustleigh and back to the show field to be cheered to the finish line by a horde of supporters.  In brilliant sunshine, the midday start to the race made it a hot one, and the route is indeed challenging, with approximately 900ft of ascent over the 10K.

This weekend was The East Farm event, held by White Star Running, near Blandford Forum in Dorset. The event was laps, which took runners through farm fields, a cornfield and passing through the famous WSR love station offering the usual drinks and goodies including cider and beer. 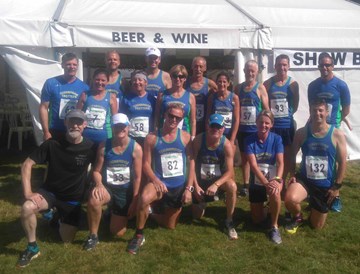 Trotters lined up nicely outside the beer and wine tent.... 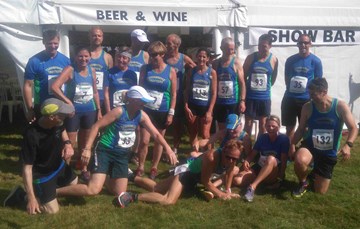 ...and then the front row fell over. Or were they pushed? Hmmm. The evidence points to it being Ruth's fault....and definitely not Gary's.

In very hot conditions over the whole weekend Saturday was a marathon which Sally Ingledew and Allen Taylor, whilst Allen’s son, Josh did the Half on Saturday. There was some confusion about the laps of the marathon to make up the distance, with some being told to do 8-laps which ended up being nearly 29 miles, whereas later into the race other runners were told to do 7-laps. Sally and Allen did the 7-laps, finishing in 4:40:08 and 5:45:12 respectively, and Josh did 4 laps to make over half a marathon in 2:10:24.

Sunday turned out to be even hotter conditions, and there was a 12-hour challenge event on offer. Allen Taylor and his son Josh, along with Lance Mason opted for the marathon, whilst Tracey Jolly lined up for the Half. This time it was 1 large loop and 7 smaller loops to make up the correct distance if you wanted a marathon or half. 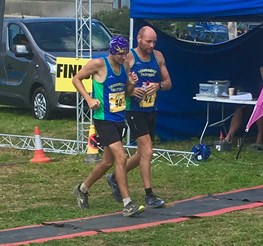 Josh and Allen crossing the finishing line together, for Josh's first marathon finish 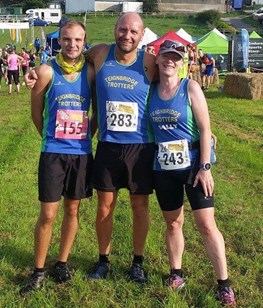 Josh, Allen and Sally for the Saturday's events 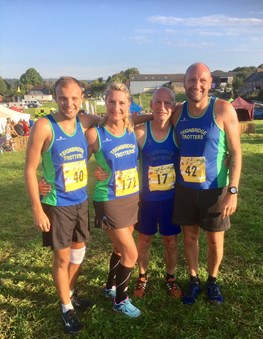 Following the Half on Saturday, it was Josh’s first ever marathon distance, and his Dad ran the last lap with him, with Josh finishing in 6:24:33, and Lance finished in 4:05:38. Tracey’s time for the Half, on her return from injury which meant little running for a month, was 2:48:47, and completing the distance has given Tracey some confidence for next week’s City to Sea.

11 months after Ben Smith completed his final 401 Marathon in Bristol the newly formed 401 foundation staged its first of what will become a yearly event; the 401 Festival of Running in Portishead.  Suzie Mills travelled to the event, and commented that the ethos of the 401 Challenge continued in this amazing inclusive weekend of runs for the whole family; no cut off times and runs for all abilities in a wonderful location in perfect summer sunshine.

The Saturday started with a 500m dash followed by a 1-mile run, with plenty of kids and adults taking part and claiming their finishers medals. Following this was the 10k around Portishead which started on a hill, and followed a route which was undulating taking runners through the marina and out to the nature reserve before returning to the Events village, followed by live music late into the evening.

Sunday dawned bright and sunny and the first run of the day was the 5k, swiftly followed by another 500m dash and a 1-mile run, before the start of the half marathon, which was 2-laps following a similar route to the previous days 10k.

To complete the festival challenge this meant undertaking the 5k, 10k and half marathon over the 2 days, and for those that did the individual medals became a giant interlocking medal. The organisation was brilliant, amazingly supportive with encouraging marshals, and a great atmosphere, over the whole weekend. A great first event for the 401 Foundation and a complete success and Suzie can’t wait to go back next year! 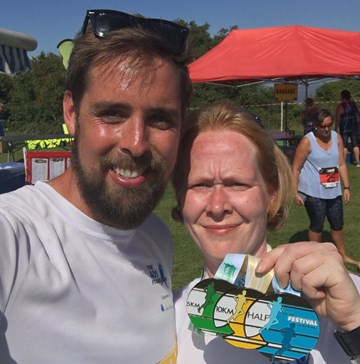 Lucy Evans, Eleanor Taylor and Emma Ray completed The Great Escape Half Marathon Moorland run from Princetown to South Brent on Saturday.  It was a fabulous run with some breath-taking views over the Moors.  Fortunately, conditions were good under foot, although there were normal moorland bogs and stream crosses. It was a hot though, which was energy-sapping for the runners.

Emma has been a member of the club for a year now, and this was her second half marathon having been persuaded to join by Lucy.  She hasn’t looked back since joining and her and Lucy crossed the line together 2:42:17 and Eleanor finished in 2:44:23.

Richard Keatley travelled up to Caldecotte Lake in Milton Keynes on Friday for marathon number 70 – the Enigma Trains, which took place on the Saturday morning. It was a warm and humid day of around 25ish degrees, and Richard’s time was 4:53, which he was delighted with. 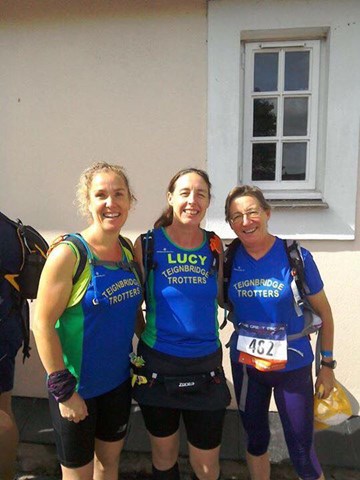 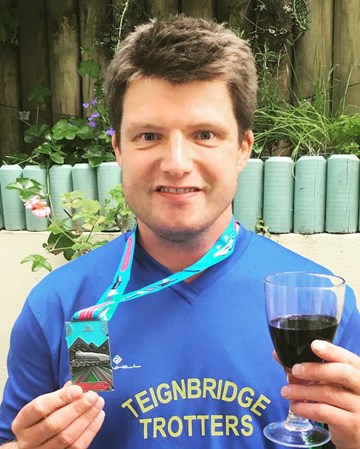 Richard after his 70th marathon