Trotters go to Munich for the away trip

A merry band of Teignbridge Trotters flew to Munich for the weekend to take part in the city’s festival of races and to sample the local beer.  Three races were available for entry: a full marathon, a half marathon and a 10K race.  The marathon and 10K started in the morning, whilst the half marathon took place in the afternoon.  All the race distances finished in the Olympic Stadium which provided a special finish with an opportunity to run around the athletics track.  The course was really flat with good PB potential and although cold at the start, the forecast rain stayed away.  The final 10K or so in particular were really good, as the course took the runners through the city to see all the sights.  Finishing times for the marathon: first Trotter home was Julian Scanes in 3.22.10, followed by Lance Skippy Mason 3.22.28, Graydon Widdicombe 3.42.38 (PB), Nigel Barnett and Allen Taylor 3.49.09, Derek Skinner 4.25.47, Roger Hales 4.27.24, Sally Ingledew 4.27.44, Richard Keatley 4.29.11(SB), completing his 77th marathon and 41st this year, and Suzie Mills 5.50.36.

The MBNA Chester marathon meant a long journey from home for Emily Levey who completed the race in a very creditable 4.07.39.

At Bournemouth marathon, run mainly along the sea front in warm conditions, Jason Lewis, in his first marathon, finished in 4.17.04 and Andy Distin in 5.24.04.

Mark Wurzel Wotton ran the Gold Hill 10k in Shaftesbury Dorset, well organised and marshalled by Gillingham Trotters.  The race starts at the primary school doing a single loop of a very tough course. While the first mile is fairly flat, runners then hit Gold Hill (a cobbled steep hill made famous by the 1970s Hovis TV commercial).  The course passes through undulating country lanes with some steep hills including the final mile to the finish line. It was a well-attended race with 240 runners and entries sold out on a pleasantly warm day.  Wurzel made 155th place in a time of 59.40.

Ten Trotters ran in the first of this season’s Westward league cross country events at Stover School.  Conditions were warm and the going was dry under foot.  The Trotters ladies’ team was led around the 5.2K course by Helen Zippy Anthony in 23.46, finishing third in the FV35 age-group, followed by Kate Lenthall 26.46, Sarah Pike 27.17, Wendy Goldthorp 27.35, Hylda Stewart 29.42, Sue Tremlett 30.32 and Eleanor Taylor 32.10.  Competing for the men, on a longer course which was modified on the day, were Jamie Barnett in 35.17, Ben Mukherjee 37.33, and Roger Easterbrook 39.22.  Let’s hope that there are enough fast men around for the remaining five events to make a qualifying team of five.

Pete Kirby was up in Yorkshire to run the Plusnet Yorkshire Marathon.  Pete was pleased finish in a good for age time of 3.55.00 and attain 3rd MV 65-69. The marathon started at York University and took runners through the city, past the famous minster, before heading out into the countryside on closed roads with crowds of onlookers in local villages, returning to the University for the finish with plenty of spectator support.  Weather conditions were ideal for marathon running as it was cool and dry, with grey skies and light winds.  The marathon was superbly organised from start to finish.

Thanks to Pete Kirby, Wurzel, Graydon, Kathryn and others for their contributions. 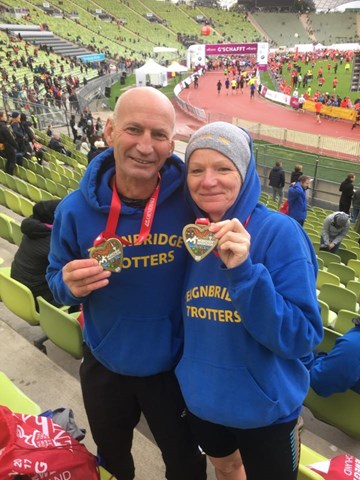 Lance and Sally at Munich 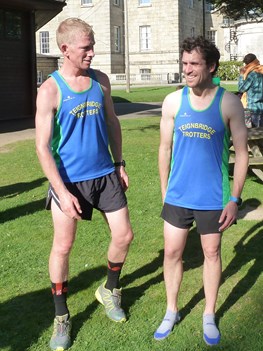 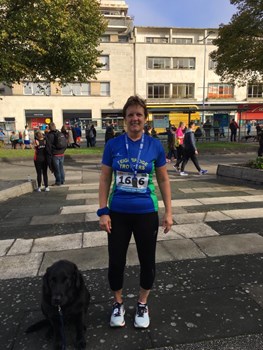 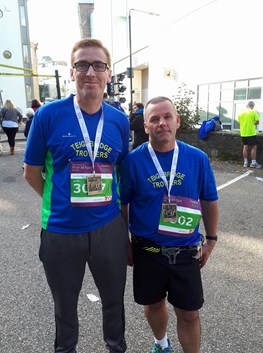