For the Teignbridge Trotters the weekend was dominated by some remarkable individual performances. The Cotswold water park, South Cerney, was the venue for Peter Blakesley and Peter Hayward in their successful attempts at middle distance (Half Ironman) triathlon. Hayward finished in 5.33.16 and Blakesley, in his first outing at this distance, in 5.49.14. In Peter's own words: Half Ironman done - tick. Lovely early morning swim and good bike ride (albeit windy), but wheels came off a bit on run (yet that should be my strongest activity). Never worried about the time, but a massive grin on face when I got my official timings which were better than expected. Big thanks to Angela Blakesley for support in last 5 weeks and on the day. Also to Keith Anderson for lending me his road bike, and for all those Teignbridge Triers who poured scorn on my old bike. Thanks for all the help with the sea swimming with special mention to Rona Boyne. Time for a beer.

Meanwhile, Ryan Anthony was struggling against strong winds in the Long distance walkers association Dorset Dawdle event. Ryan says this was a 32 miles of 'ouchy' hills and cracking coastline if you could smile long enough to appreciate it. The event was well organised event by the LDWA. And for just £12 for entry and £8 for bus to the start represented excellent value. LDWA put on other challenge events for runners that are well worth considering if you're looking for something a bit different.

Richard Keatley was another Trotter taking on a challenge in Dorset. Richard is making steady progress in his quest to complete 100 marathons before he reaches 40. He completed his nineteenth and twentieth marathons over the weekend by taking on the Bad Cow Marathons days 1 and 2 at Holton Heath, near Poole, organised by White Star running. He found it a really enjoyable course with an undulating trail through the heath, and thankfully it was not too hilly. Competitors did the usual route one way, then the second day in reverse. Richard was particularly pleased to reach marathon number 20.

Closer to home, but still in the somewhat extreme category, was the Dartmoor Volcano Race organised by Pure Trail. This tough event on Dartmoor claims to include three river crossings, two bogs, one volcano (actually a spoil heap) one long uphill and a long downhill finish. Two Trotters flew the royal blue: Craig Churchill led home in 1.37.34, taking 14th place and Derek Skinner came 37th in 1.46.58.

Not to be outdone by all this, Mark Walker organised the Teignbridge Trotters Inaugural Heavyweight Challenge on Friday evening:

Friday saw a great turn out for the first ever Heavyweight Challenge at The Sandygate Inn in Kingsteignton. The idea was simple, make everyone run half a mile weighing the same as each other. So the lighter Trotters had leg, arm and rucksack weights to carry, up to 47 Kg in one case!

Hilarity ensued with weighed down runners attempting to run with varying levels of success. Trottetes supported the event in good numbers and provided the timings and weight calculations.

After the runs a few celebratory pints were sunk as Trotters enjoyed a lovely summers evening. 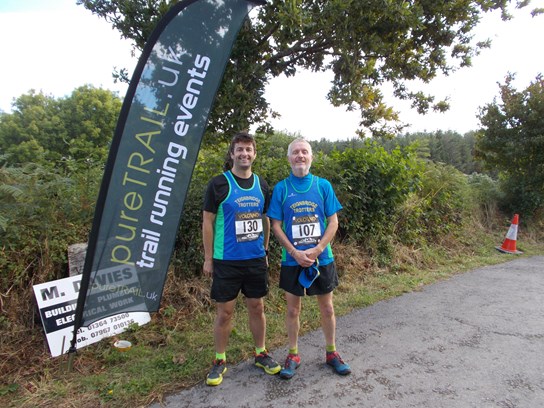 Craig and Derek before their race 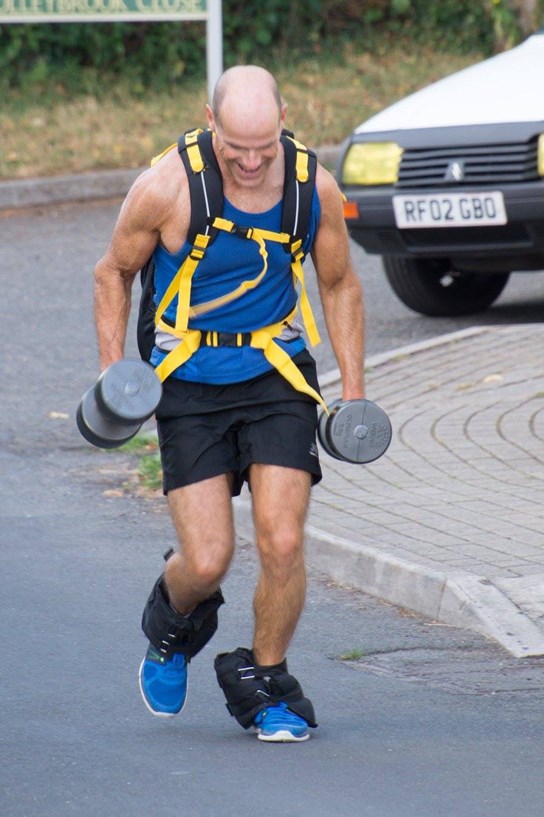 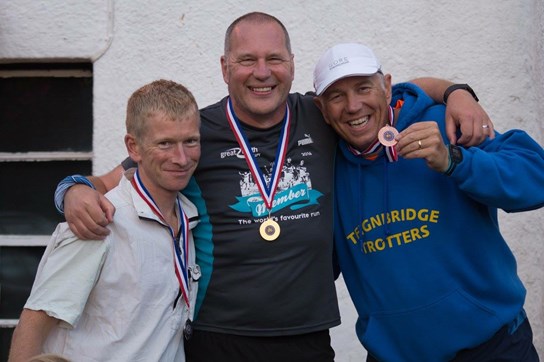 Mark, Rog and Big Mac with their shiny medals