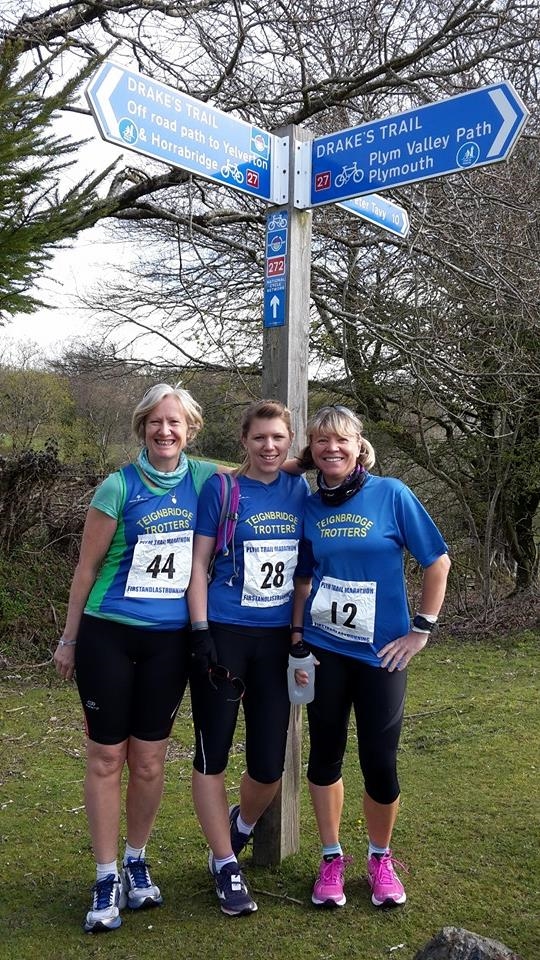 It was another busy weekend of racing, with many Trotters competing at events covering the 26.2-mile distance, as well as other race distances.

First up, on Saturday 30th April, a group of Trotters travelled to Clearbrook (near Tavistock) to take part in the Plym Trail Marathon, organised by firstandlastrunning. The Plym Trail is a historic railway line and the out-and-back nature of the course meant the runners ran through a long tunnel four times, and also took in some great views of countryside. The first and third legs were mainly downhill, meaning the second and final legs were uphill, which some runners did find a challenge! But the conditions were good, if a little warm in places.

On the same day Clive Wheeler completed the Half Marathon in a time of 2:21:38.

I also heard a rumour that the middle aid station was by far the best one on the course as it was apparently exceptionally well managed by a Teignbridge Trotter, but I can’t really comment more on that….

Sharon Bowman returned to the race again on the Sunday and finished in a time of 5:00:36, and was joined by Ian Langler who managed 3:58:31.

There aren’t many weekends without a Club Championship race, and on Sunday 1st May ten Teignbridge Trotters travelled to the Bere Pen 10K held on the Bere Peninsular, which passes along the beautiful River Tamar. The race has some history, as it has apparently been running in some format since the 1930's.

It’s a tough race, and the chip timing fell foul of the rain that fell increasingly hard as the race progressed. The route comprised of 3 down easy miles followed by 3 back up that are extremely tough.

Lucy Payne made light of it and finished in a time of 57.38, a great run and good enough to win her first Lady 60 prize.

4 Teignbridge Trotters travelled to Dorset to take part in the respected North Dorset Village Marathon, excellently organised by Gillingham Trotters. It is a picturesque course along country lanes, and with a hog roast available at the finish, runners are certainly well catered for.

It is a large race with about 7000 runners and Oli managed to knock 5 minutes off of his time from last year with 48 mins 19 seconds, for 722nd position. Luckily, the weather was good and the rain held off long enough for the race to finish. 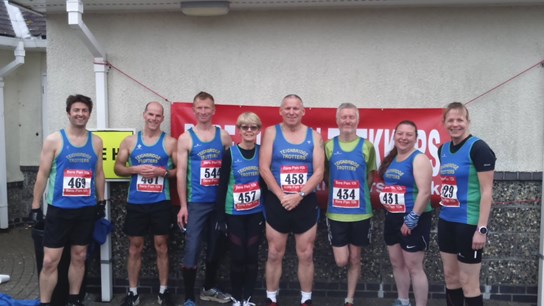 Dave McMorrow ran the Neolithic marathon on Sunday. He found it a real struggle but managed to get round in 5.14. The route goes across Salisbury plain so being overtaken by various tanks and other armed vehicles made it an interesting experience!

Thanks for the contributions from Oli, Derek, Rod, Dave and Sharon