Plymouth Half Marathon, Honiton Hippo and a 50-mile race.

On Sunday 17th April, 8 Teignbridge Trotters travelled to Plymouth for the Half Marathon, which is a traffic-free road race. The course is quite challenging, but the scenery was fantastic, with lots of spectators cheering the runners on. The weather conditions were ideal, as it was sunny and not too cold.

Oli Prouse did his second half marathon in consecutive weekends, managing a big PB with 1:48:24. Oli had Neil Pallant for company, which Oli said really helped him to knock nearly 10 minutes off of his previous best time. Meanwhile, Daryll Hall donned his Trotters vest for the first time. 4721 runners finished the race, and full Trotters results are below.

Eleanor Taylor was the sole Trotter who did the Honiton Hippo, on the same day. Eleanor commented that the race was exactly what it said on the tin; “A Tough Multi-terrain race with Roughly 7 miles of Mud, Sweat and Tears”, not to mention the odd hill and two rivers thrown in for good measure.

The event is a well-marshalled event starting and finishing in central Honiton, and is organised by Honiton Running Club. The route included roads, lanes, tracks, footpaths and rivers, through woodlands and fields and the runners were treated to some great views.

209 runners completed the race and Eleanor’s time was 1:25:46 for 127th place, and all the runners were treated to free tea, coffee and very nice cake at the end!

Richard Keatley completed his 10th marathon, which was the 50-mile Endurance Run held in Fowlmead in Kent. In what were great conditions, the event was laps of a 2-mile tarmac circuit. It was Richard’s biggest challenge to date and he felt good all the way around finishing in 10:17:54, well inside the 12-hour cut off.

Thanks for the contributions from Oli, Neil, Eleanor and Richard.

Picture 1 is Daryl, Neil and Oli at the start of Plymouth.
Picture 2 is Richard with his medal. 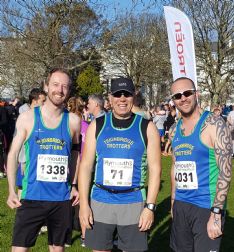 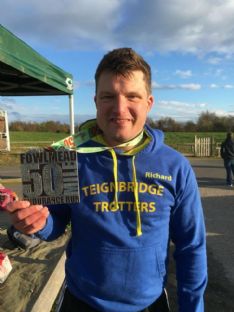