On Sunday 20th March, 7 Teignbridge Trotters took the trip to Somerset for the 6th Yeovil ½ Marathon, as a part of the Club Championship.  It was the first time for a new route and the organisers removed a notorious ‘very challenging’ hill. The 13.1 mile route took runners round the Town centre, through Yeovil Country Park and the grounds of the 16th century Montacute House before meandering back to a spectator-packed finish in the town centre.   First Trotter across the line was Mark Hutchins in 1:36:21.  He was closely followed by Bruce Campbell who finished in 1:36:39. Triathlete Pete Hayward came home in 1:55:35.  Eleanor Taylor had overtaken Tina Caunter with a couple of miles to go and held on to finish in 1:55:16 with Tina close behind in 1:57:19.  Newcomer to Trotters, Kathryn Steemson improved her personal best time for the distance by 6 minutes and finished in 1:59:02.  Michael Smerdon’s provisional time was 1:37:56.
--

For an unusual way to spend a Saturday, Derek Skinner, Kim Nichols, Daryll Hall and Oli Prouse took part in the Rock Solid event at Escot House in Exeter on Saturday 19th March, as part of a team.  The event required them to climb and wade through lots of obstacles including thin and thick mud, jumping into freezing cold pools and sliding down slides into a freezing cold lake.   Then the competitors had to climb up a climbing wall to where the inflatable finish was, completing a total of 15 freezing kilometres.

The race was really cold all the way around and unfortunately Kim had to pull out at about 4K from the end as she just couldn't go on, due to the cold, although the hot showers at the end where very welcome!  This event isn’t really about the times, but the team (along with two other non-Trotters) completed in around 2hrs30mins.

Three Trotters travelled to London for the Vitality North London Half Marathon, on Sunday 20th March.   The event started directly outside Wembley Stadium and worked its way around North London before hitting halfway at the Allianz Stadium, home of Saracens Rugby Club.   The route took runners inside the stadium and around the pitch before starting the journey back towards Wembley.  This surprisingly hilly course proved a challenge and very few people were talking about PB's as they started the final half mile down Olympic Way before heading into what the organisers had dubbed 'the greatest finish line in the world' and they were not far wrong as the finish line was inside Wembley Stadium itself.  A well organised, well supported race with an absolutely brilliant finish.  Times were Donna Walker 1:56:58, Tim Hartley 2:04:50 and Mark Walker 2:24:12.

Jim Donovan and Emma Pearcy headed to the north of the county for a new trail race.

Run Exmoor is only in its second year and promises to become a go-to race for off-road enthusiasts in future.  It starts and finishes on a farm in Simonsbath, Exmoor with a choice of distances: 10k or 10-mile (both are a bit further really but who cares when the scenery is this good).

The race takes runners through some of the most spectacular countryside Exmoor has to offer.  Competitors cross beautiful open moorland and farmland, pick up bridleways through ancient woodland and meander an undulating path beside the River Barle.  A race on Exmoor isn't complete without a few hills and there was a couple sharp steep climbs to conquer.

Finishers were treated to a load of finish-line goodies: a memento mug, chocs, bottled water and bananas.  Once they'd scoffed that, there was a bar and homemade cakes to get stuck into.

Finally, Katrina Zaple competed in the Dartington Duathlon Sprint event, which is a 5K run, a 20K bike ride and then a 2.5K run to finish.  In what was an extremely well organised event, Kat managed under 30mins for the 5K, about 53mins on the bike and then finished the final 2.5K run in around 16mins.  With transitions, Kat’s total time was 1:42:18 for 4th in her age category.

Thanks for contributions from Derek Skinner, Mark Walker, Eleanor Taylor and Emma Pearcy.

--
Picture 1: Donna, Tim and Mark outside Wembley.
Picture 2: Daryll at the Rock Solid event.
Picture 3: Jimmy and Emma at the Run Exmoor event 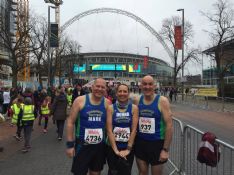 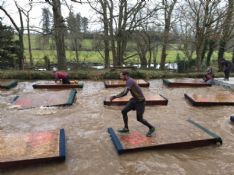 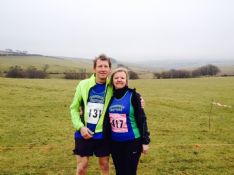