The start and finish was situated at Cremorne Gardens in Ellesmere. The race comprised of six distinct legs. LEG 1: was a 12km out and back loop to the start, where the first aid station was situated. LEG 2: the longest leg of 24km which was a net downhill run along the narrow tow paths of the Montgomery & Shropshire Union Canal. LEG 3: 15km into the hills with 470m of elevation gain. The trail briefly crossed the Welsh border passing Llanymynech golf course, before returning to England. The course dropped down into Trefonen before heading up to Oswestry race course. LEG 4: 13km took the runners over the highest point in the race at Selattyn Hill (383m), above sea level before climbing another 260m through Bronygarth to a checkpoint at Chirk Bank. LEG 5: 10km along the Shropshire Canal towpath to the next aid station at the Narrowboat Inn near Ellesmere. LEG 6: the final 7km followed the towpath to the finish in Ellesmere.

Unfortunately some of the sign posting had been removed, which caused unnecessary stress for many of the runners, who were already tired and wet due to the incessant rain which didn’t abate all day. Ruth enjoyed the stunning scenery along the route, but found the terrain very demanding and even brutal in parts. Ruth stopped counting the number of stiles she had to climb over at No 47!

Ruth beat the final cut off time which was an achievement in itself. She finished in 24th position, clocking a time of 12:44:30.There were 20 non finishers which highlights how well Ruth performed. 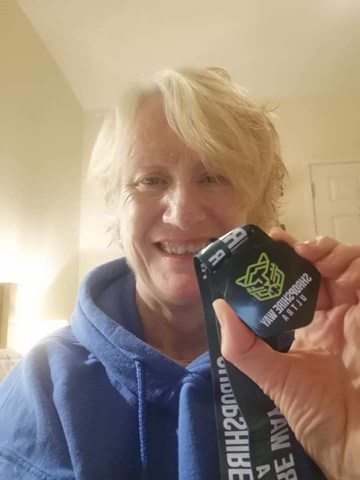