Team spirit is often what you’ll hear people mention when they talk about the Teignbridge Trotters. Many casual observers remark on the club camaraderie, the sense of fraternity and the genuine friendships (plus the rest) that arise from this supportive bubbling broth of blue and green.

So… this weekend was a good one because team Teignbridge displayed the characteristics described in the above ruminations and bagged a few prizes.

Plus, let us not forget that the individuals themselves helped things along a little bit by running superb races.

Haldon Heartbeat on Saturday May 14 attracted 19 Trotters. The 8.5-mile race takes runners around Harcombe Woods in Haldon Forest and is entirely off-road.

*A clutch of Trotters headed to Cornwall for the Imerys marathon on Sunday May 15 and collectively landed third place for the men's team.

This race is a hard undulating course in and around the clay pits of St Austell. It’s run on private land and is the only time of the year that anyone can access it. Likened to running on the moon albeit with lots of lakes (not sure Buzz Aldrin spotted those when he tentatively trudged around up there), sunglasses were a must to protect eyes from the chalk glare.

On the day, a nice breeze helped prevent Trotters from sizzling in the scorching sun. This race was a warm up race for Allen Taylor who is tackling a 37-mile ultra next weekend and a final long run for the others, apart from Roger Hayes, who are taking part in the Dartmoor Discovery.

The first four gents - Allen, Roger, Kris and Paul won the 3rd mens team and this was also Kris Ward’s first race as a Trotter.

While he may have been flying solo, Steve returned home with the team in mind, saying: “The route was much hillier than I expected and the temperatures dropped significantly during the night. I threw in the towel after 12 laps which was slightly less than I was aiming for but excellent hill training ahead of the DD.

“The event is for soloist or teams of up to 8, a number of our local clubs took part as a team event. I would recommend this to our fellow runners next year as it looks great fun and real team effort.” So, how about it? Potential combined club camp/club trip next year? Over to you…

*Back in Devon, Exeter was the destination for a few runners taking part in the resurrected city marathon. Derek Skinner kept up his fine form. He was the first Trotter to cross the finish line in a time of 3.44.23. Other results were: Roger Hales 4.01.35, Peter Kirby 4.02.09, Dermot Smyth 4.10.28, Lance Mason 4.38.40, Sally Ingledew 4.38.40 and Donna Walker 4.41.57. As with the Imerys marathon, all seven Trotters were using the Exeter marathon for their final race before the Dartmoor Discovery on 4th June.

Thanks to Chair & Donna Walker for the pix. 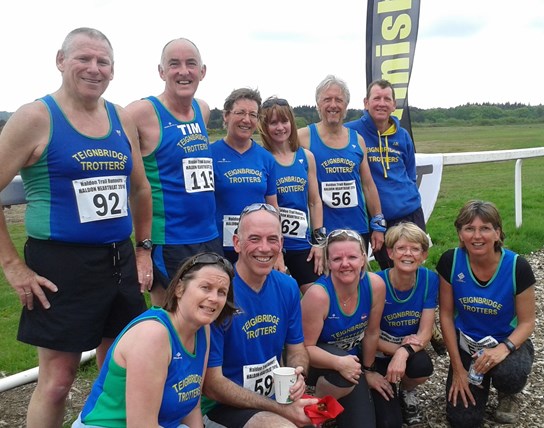 A few Trotters after the Haldon Heartbeat 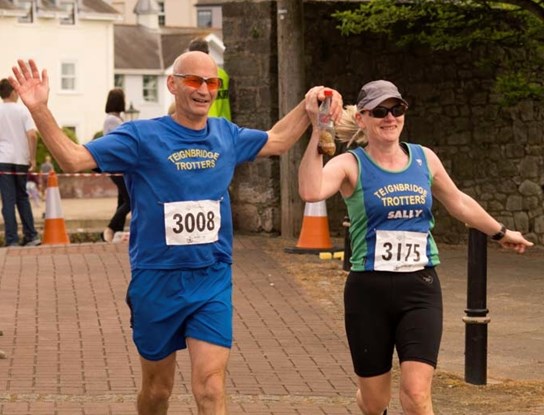 Skippy and Sally ticking another one off! 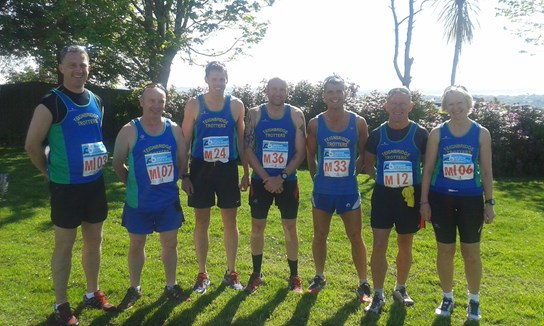 All smiles before the start of the Imerys Marathon 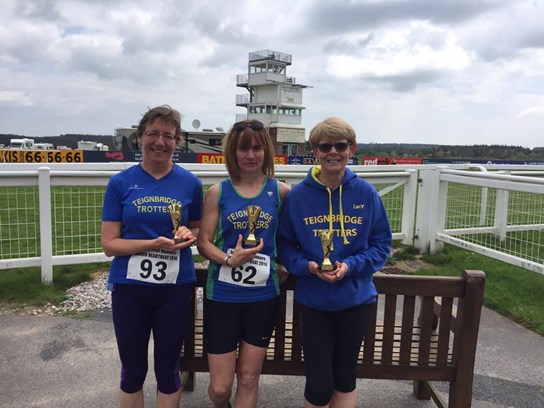 Three of the four winning Ladies' team at the Haldon Heartbeat