A very busy weekend with a 10K club record, marathons, a half marathon, trail races and a 20-miler 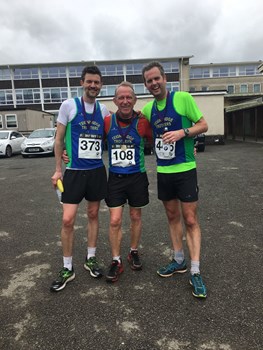 Chris, Paul and Graydon after Tavy 13

Several Trotters took part in the Age UK 10K, held in Exeter on Sunday 19th March. The race starts in the city centre and takes runners down to the quay area.

Louise Stokes has been training really well and this was her first ever race – and hence, her first race in a Trotters vest. She bettered her own expectations, and she is rightly very pleased with her time. Well done to Louise.

Julian Scanes had a great run, finishing in 40:11 for a 2min21secs PB, which was despite having “a few beers” on Friday night on the stag do of club mate Peter Heckles.

Finally, Dave Taylor knocked a couple of seconds off of his own V70 10K club record, so there was some great running by Trotters.

On Sunday 19th March, three Trotters took part in the Tavy 13, which is a Half Marathon taking runners over Dartmoor, and starting and finishing on Tavistock College’s running track. The event is superbly organised by Tavistock AC and the course is a tough one with over 1200ft of ascent, most of which is in the first 8-miles; the views are definitely worth it though. The route is on roads and good cycle paths and the rain stayed away, although miles 8-10.5 were into quite a strong headwind, which was energy sapping for the runners.

Duncan Hogbin and Sam Riches were running in Fingle Woods on Sunday in Puretrail’s Deep River Trail races. Sam ran the 6-miler and finished an impressive 4th out of 91 finishers, in a time of 47:54. Meanwhile, Duncan completed the half in a time of 2hrs 48mins to claim 59th out of 82 finishers in his first half race (including a tumble at mile 2!). On the day, the weather stayed dry and mild and the scenery was spectacular. 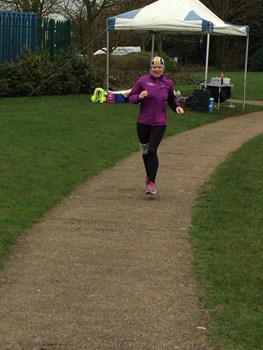 Sally during one of her three Enigma marathons

On Sunday 19th Match, three Trotters travelled to Gloucester to take part in the Gloucester 20.  In grey & windy conditions, Pete Kirby, who is training for the London Marathon, completed the three-lap course in 2.54.39 (219, 2nd V65-69) and Craig Hobson, who is training for the Manchester Marathon, completed the course in 2.58.37 (256).  There were 435 finishers.

Enigma Running, based in Milton Keynes, held a week-long event where competitors could run marathons on each of the seven days – the event was called “Week at the Knees”.  Each marathon is multiple laps around lakes in Milton Keynes; three days at Willen Lake (9 laps), three days at Caldecott Lake (7 laps) and one day Furtzon Lake (17 laps).

Sally Ingledew is getting her marathon numbers up in a bid to have this year’s Dartmoor Discovery as her 200th marathon.  Sally ran marathons on Tuesday 14th, Wednesday 15th and Thursday 16th March taking her total up to 196, completing them in times of 4hr49, 4hr43 and 5hr11 respectively.

Graydon Widdicombe competed in Monday’s event, which was 9-laps of Willen Lake.  In very good running conditions, Graydon finally went under the 4hr mark with a time of 3:54:17.

Please note. Keith Anderson will be doing next week's report (25/26 March), so please send any race news to him via email: keithanderson50@gmail.com.