Trotters take on some challenging races over the weekend

On Saturday 21st October, the inaugural The Tempest (organised by Mud Crew) 10-mile night run took place, which took runners on an out-and-back between the Minnack Theatre and Land’s End. The event started at 7pm (with spectacular wave breaks, and had the local children performing a version of The Tempest) and was fully dark as the runners set off, so they had to make good use of the mandatory head torch.

Sue Tremlett was the only Trotter, and there was a great atmosphere if a little scary at times, with Hurricane Brian doing his worst and tried to blow us into the sea but failed. The route was on tough terrain, with a few steps thrown in for good measure but fortunately the rain mainly held off and Sue enjoyed it running with a friend.

Then, Sue along with 9 other Trotters took part in the Tavy 7 on Sunday 22nd October, which is part of the Club Championship. The race is all on country lanes near Tavistock and is pretty challenging and very exposed in places. On race day, the wind was quite tough going across the moor (miles, 2 & 5), whilst the start and finish was in a field, which was very churned up for a short stretch. However, by the time the runners were back, the organisers had sanded it so it wasn’t too bad, with a nice down hill to finish.

Louise was really happy with her performance, and it was her first race at this distance.  Louise is a regular at the Improvers Trotters training session, and she's pleased they are starting to pay off.

Jim and Emma Donovan took a jaunt up the M5 to Westbury for the White Horse Gallop, a quad burning 8-mile trail run with outstanding views of the Westbury White Horse. Organised by the friendly Stampede Sports, the event was limited to 100 giving it a low-key exclusive feel.


The route took competitors along leaf-strewn bridlepaths from Leighton Recreation Centre up to the top of Westbury Hill along the Imber Range path and fields before sharply dipping down and a steep climb up around the White Horse. After circling around Bratton Camp, runners descended back down into Westbury following the Wessex Ridgeway to the finish.


This race was technically tough with racers needing to pick their way through muddy fields, rutted fields with adverse cambers, stony paths and slippery chalky ground while a blustery wind harried them all the way and almost brought them to a standstill such was its full frontal force at times.


The Gallop made for an exhilarating race with incredible far-reaching views of Wiltshire. Jim felt right at home, drawing on his vast experience of off-road racing to finish 23rd in 1:07.45. Emma clocked 1:20.35. In keeping with the equine theme all finishers were given a rosette.

Emma Foreman completed Stroud Half Marathon with her cousin, hence the required drive to the start. It was all in aid of Parkinson’s UK but Emma sporting her Trotters gear with pride, and managed a huge half marathon PB of 2.01.07, which took 21 minutes off her previous best! The course was pretty flat with a head wind for the first half and a tail wind for the second half, and Emma commented that she somehow also managed another 10K PB as part for the race!

There were a couple of marathons ran by Trotters, with Kurt Read completing his 3rd marathon in as many weekends, at Venice Marathon. It was a good, fast route although slightly boring. The rain held off and there was a good finish through St Marks Square and then on the waterfront. Kurt celebrated with a couple of beers in the Hard Rock Café, and was planning a few more later in the day. Kurt finished in 3.11.47.

Kurt also bumped into a runner from Great Yarmouth, and of course Kurt was happy to promote the best club in the world!

Meanwhile, Graydon Widdicombe travelled to do Abingdon Marathon, which took place on Sunday 22nd October. It’s known as a fast course, with the winner completing it in under 2:30 and 87 of the 751 finishers going sub-3.

The course is very flat, but Graydon struggled a bit in the blustery conditions, finishing in 3:48:44 for 491st place. 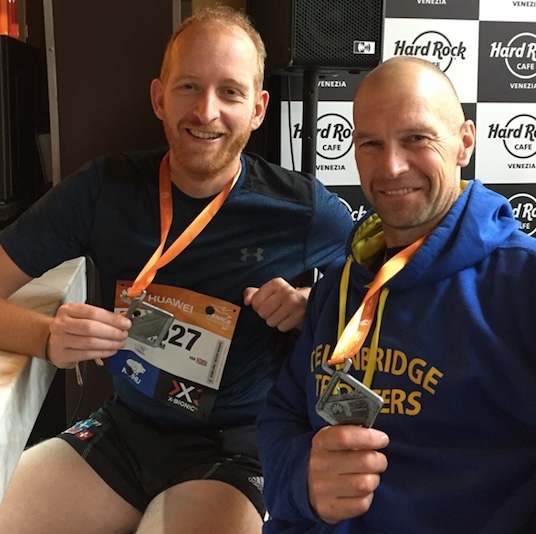 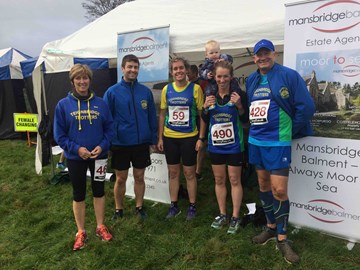 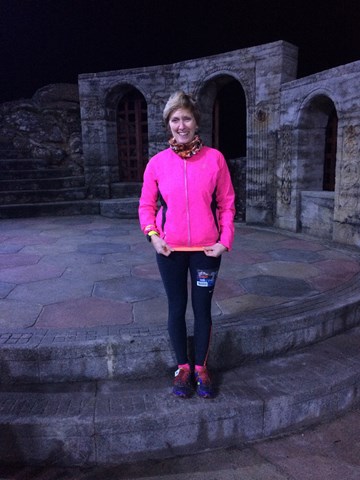 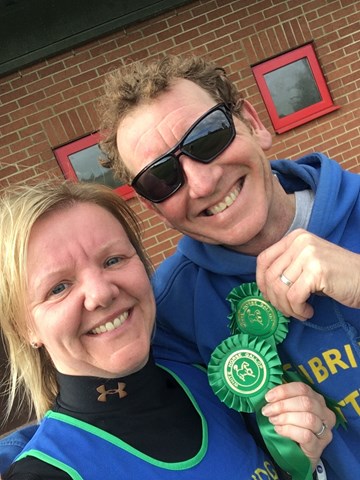 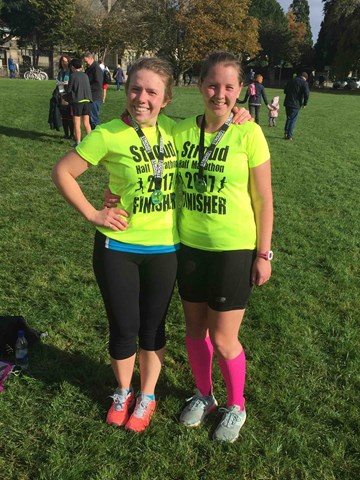 Emma Foreman at Stroud Half with her cousin