Temperatures soar as Trotters tackle multi-terrain events around the county

On Friday 28th June, the third and final time trial of the year took place around The Sandygate Loop.

The four mile course started and finished at the Sandygate Inn, in Kingsteignton, and followed quiet country lanes on a circular loop. It’s a stiff challenge, climbing up for the best part of two miles, before the steady drop down to the finish.

On a warm sultry evening, a large contingent of Trotters turned up, to either record their first time of the season or to try and improve on their times already achieved. Due to being a Club Championship event, competition was fierce!! 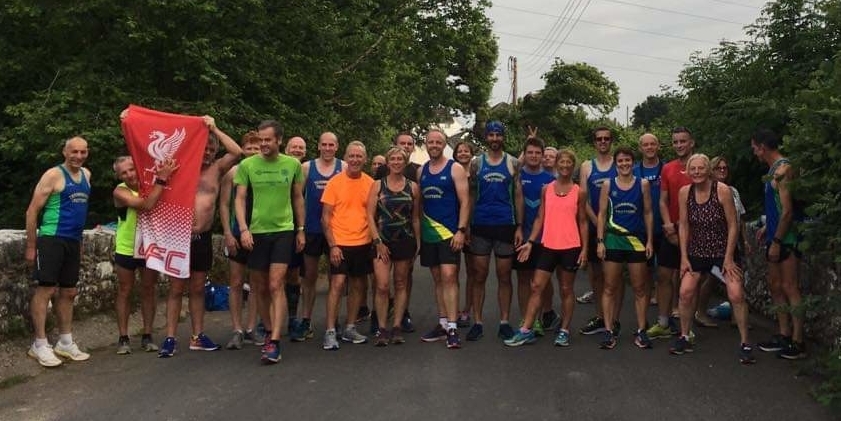 The fastest time recorded on the night was set by Gary Smart, not surprisingly!! Gary completed the time trial in an impressive time of 23:57.

Mandy Wheeler clocked the fastest time amongst the female contingent, crossing the line in 26:41.

The other times were:

The quartet of Teignbridge Trotters at Umborne Ug 10k

Four Trotters travelled to East Devon on the evening of Saturday 29th June, to take part in the Umborne Ug 10k, an Axe Valley Runners organised event. The race was supported by a 2.5k fun run.

This race is part of the East Devon Community Race Series. The monies raised went into the Village Hall funds. As always, the race officials and marshals were all very welcoming and supportive.

The scenic, multi-terrain race route was a true test of stamina for all the runners, what with the warm, humid temperatures to cope with.

The ever improving Ian Langler led the Clubs quartet home, finishing in 16th position, in a time of 52:38.

Jim Donovan put in another consistent performance, posting a time of 59:07 to claim 33rd place.

Finally, Mark Wotton, fresh back from his Norwegian race experience, and in slightly warmer conditions, crossed the line in 64th in a time of 1:12:43.

The race was won by an Axe Valley athlete, who incidentally filled the first three places. Chet Gillespie took the honours in a time of 41:59. 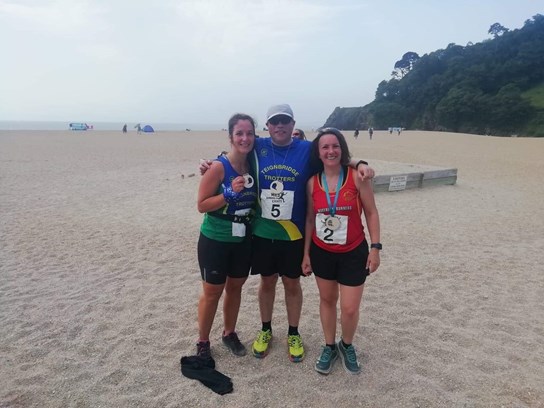 Kate and Craig and a Maverick on Blackpool Sands

Kate Blackmore and Craig Hobson took part in a new event, the Stumpy Steps Trail Run, organised by Wild Running. The race took place on Saturday 29th June with a 9:00 am start.

The race started in the stunning bay of Blackpool Sands near Dartmouth. The runners set off along the South West Coast Path towards the Stumpy Steps ferry, next to Dartmouth Castle before returning to the finish at Blackpool Sands.

The 16 runners not only had to climb 1100 feet, but they also had to contend with the very warm humid conditions.

Kate and Craig represented the Club superbly well, both finishing third overall in each gender category.

Kate much prefers trail runs, and the result speaks for itself! Kate completed the course in 1:17:51, to finish 6th overall.

Well done to both of you. 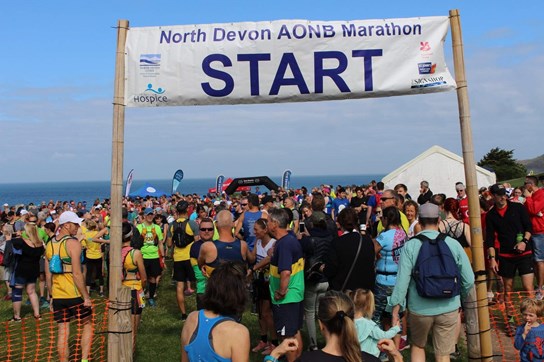 This was the 10th Anniversary of this very popular event that attracts runners from all across the UK and abroad. Alongside the marathon, a half marathon is also run, but due to the anniversary, a 10k race was also on offer.

The race organiser was Simon Oliver, an experienced local runner who has been involved in organising races for many years. All monies raised will go to the North Devon Hospice.

The multi-terrain marathon started at the surfing village of Woolacombe. And offered the runners challenging hills and stunning views. The terrain changed constantly, with roads, trails, beaches, fields, steps and the South West Coast Path to tackle. This race is also known as the Cream Tea Marathon, as the runners are treated to a traditional Devon Cream Tea at the finish line.

The weather conditions were warm and overcast, as the runners set off.

Allen and Roger ran solid races, and finished together in 29th and 30th positions respectively. Their time was 4:18:22. There were 66 finishers.

The winner was Andrew Siggers, representing Kenilworth Runners, completing the tough test in 3:16:42.