Trotters stage the Templer 10, and records tumble at Bideford 10

Teignbridge Trotters staged its last race of the year – The Templer 10. It’s a multi terrain 10-mile course starting and finishing in the wonderful grounds of Stover School, Newton Abbot. As the course is 90% off road, it can be a tough race, but with the support of all the marshals and other help on the course, it’s a local favourite.

There is a 1-mile fun run for the kids too, making it a family-friendly event, and this year there were 85 finishers, which is a great turn out in cool conditions. The young Trotters that took part were Oliver Elphick (8:10), Toby Mills (9:57), Rubi Shillabeer (12:41) and Barnaby Mills (13:07). Well done to all.

In the 10-mile race, Unattached Brennan Townshend won the men’s race in a fabulous time of 57:22, whilst Ellie Dominey from South West Road Runners won the ladies event in 1:08:41. 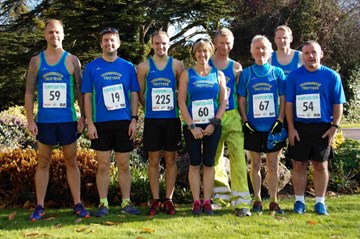 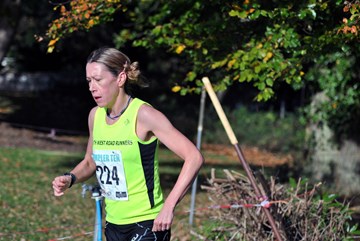 Ellie Dominey on her way to the win

Race Director, Ryan Anthony, said “It’s a great team effort from the Trotters, to put on an event such as this – and the effort is worth it as I’ve had lots of positive feedback from the competitors, which is great to hear”. Also, Ryan and the Trotters thanked the race sponsors; Eatons Patisserie from Kingsteignton, Enduragas and The Red Rock Brewery.

Some history of the Templer Way and Stover School is shown below.

A few Trotters travelled to Bideford, to take part in the Bideford 10 mile race, and it ended up being a record-breaking race with three separate club records falling.

Organised by Bideford AAC, the course is known to be a fast one, and is billed as “probably the fastest 10-miler in Devon”. It takes runners along Instow seafront into Yelland and returning along the Tarka Trail, running through a tunnel.

Jamie Barnett was the first Trotter to break a club record at the event, finishing in a fabulous time of 55:12. Tracy Elphick has been running brilliantly recently, and she claimed the club's FV45 record in a time of 1:10:32 (5 minutes quicker than the previous record) and she also claimed second FV45 at the event.  It was also a PB for Tracy, who knocked over a minute off of her 10-mile time that she set back in 2008 at Plymouth Hoe.

Finally, Lucy Payne knocked an incredible 34 minutes off of the previous club FV65 record, finishing in a time of 1:30:45.

Graydon Widdicombe travelled to Hartlebury in Worcestershire, to take part in two of the Halloween 7in7 marathons. The course for both days was the same; 6 loops (each loop contained a nasty, little hill), followed by 3 out-and-back sections, making up the marathon distance. Conditions were good for both days, although rain fell late into the event on Day 2. This was Graydon’s first attempt at a double and he managed 3:55 (The Petrified Pootle) and 4:05 (The Spooky Sprint). 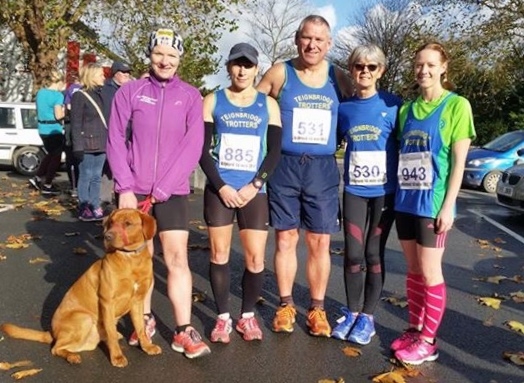 Mark first did this race about 10 years ago, when it was pancake flat. Now it's completely changed and is very hilly. The start was delayed by half an hour due to the amount of people taking part, and the runners had to wait in the heavy rain.

The course takes the runners through two small villages and over a Victorian viaduct, and the last 2k are on a cycle track back to the village hall where the race started and finished. The rain stopped just as Mark finished, and he completed the race in 54.14 for 538th out of 1,430.

Mark was pleased to catch up with ex-Trotter who now lives in Wales, Graham "Inky" Penn.

Richard Keatley completed the Enigma Fireworks marathon at Caldecotte Lake in Milton Keynes, finishing in 5:12. It rained heavily until mid morning, and then the sun broke through. It was Richard’s 45th of the year., and 81st overall. 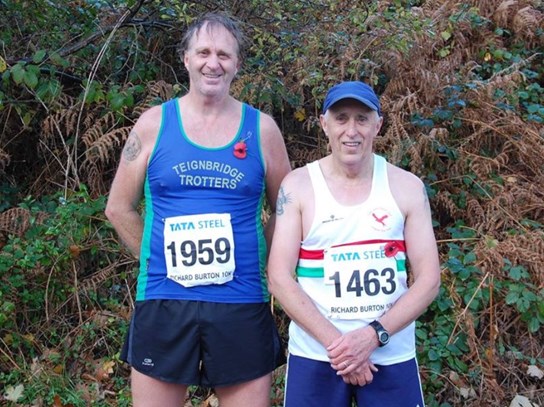 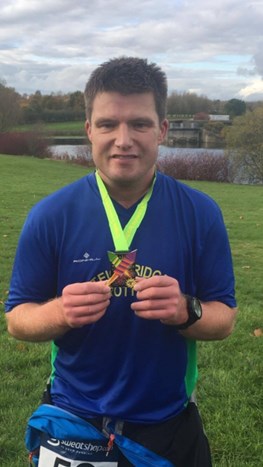 Richard with his medal

The Templer 10 race is currently based from Stover School, which has a lot of history around it. In fact, a few of the descendants of the Templer family were at the race on the weekend,

Sarah Hockley, a descendant of the family said, “Stover School was built as a Georgian Mansion. It was commissioned by James Templer (1722-1782) and completed in 1777. Three generations of the Templer family held the estate until 1829 when it was purchased by the XI Duke of Somerset, remaining with his family until after WW1”.

The Temper Way is today an 18-mile stretch that goes between Haytor in Dartmoor and Teignmouth. Both families pioneered the extraction and export of Ball Clay and Datmoor Granite on a commercial scale, using the quarries and Transport system created by the Templers.

Sarah goes on to say, “The granite was removed from Haytor quarry and using a granite tramway moved down to the Stover canal and onto the sea. The surviving evidence of the industrial past can be found along the route of the Templer Way”.

To the right is a picture of the descendants of the family, who were in attendance at the race.

Descendants of the Templer family