Teignbridge Trotters were out in force over the weekend. A staggering total of 26 flew the royal blue and completed the Forest Flyer, a race of approximately 5 miles of forest tracks, paths and fire roads in the beautiful Haldon Forest Park, Exeter. The event was superbly organised as usual by local running club the Dawlish Coasters.

Four Trotters travelled to deepest Dorset to take part in White Star Running's aptly named East Farm Frolic, near Blandford Forum. This was a multi-terrain 12 hour challenge through a bit of woodland, two farmyards, open fields and a big hill, where competitors could choose their distance and run solo or as part of a team. Three brave souls smashed the marathon distance by doing 7 laps, with Lance Mason completing in 4.25.54, Sally Ingledew in 5.20.46 and Richard Keatley in 5.32.57, while Allen Taylor, using this as a training session for greater things to come, and not flying the club colours, ran in a team of 3 and won 1st place after running a team total of 83.6 miles. For Richard this was Marathon number 21 and he picked up his 'First Dan' award which involved completing 6 out of 7 White Star Running marathons, Richard qualified by doing 7 since March this year.

Closer to home, Lustleigh Show ground was the destination for seven Trotters who took part in the annual Lustleigh 10K race. The course takes runners over hilly lanes, down muddy tracks, through beautiful woodland, along the river Bovey before spitting them out into the village of Lustleigh and back to the show field to be cheered to the finish line by a horde of supporters. 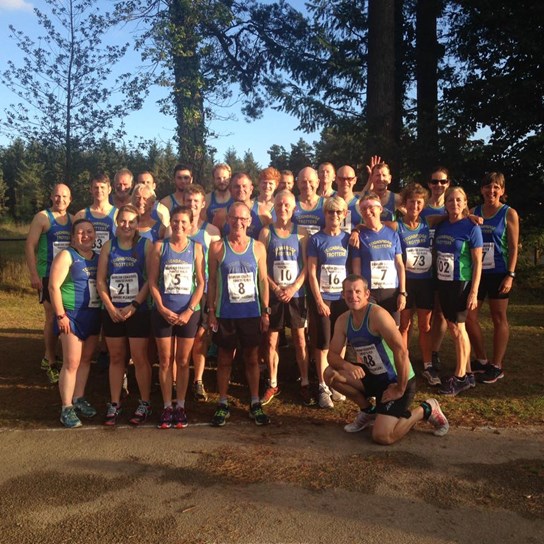 Trotter line up before the start of the Forest Flyer 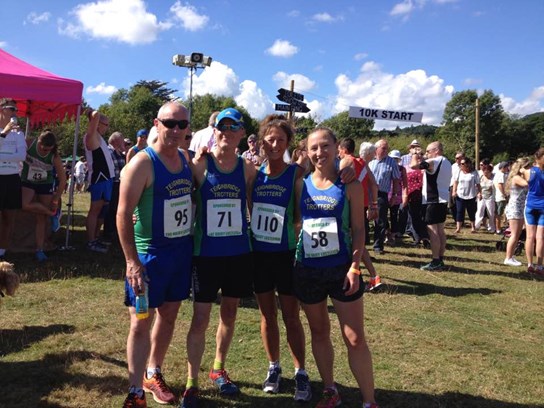 John, Derek, Jacki and Sarah, all smiles before the Lustleigh 10K