Several Trotters took part in the first edition of the Torbay Tornado races on Sunday, which took runners across some tough and challenging terrain, but also allowed them to take in some stunning scenery. The Half Marathon started on Berry Head in Brixham, and took the runners over the coast path to Paignton and on towards Torquay, to finish at Ilsham Green. Meanwhile, the 10K started on Paignton Green and followed the same route to Ilsham Green. 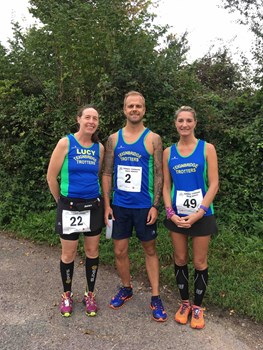 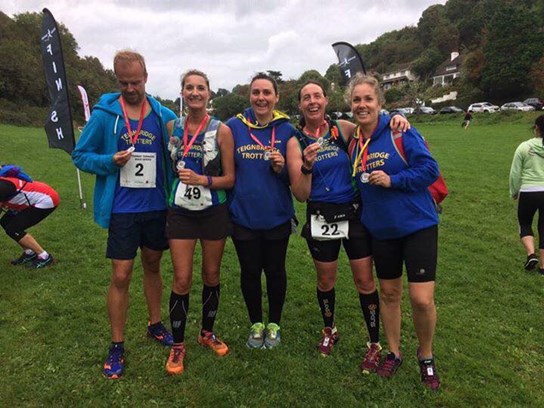 Trotters at the end of the Tornado races

Kevin Sampson and Gavin Forbes travelled down to Newnham Park in Plymouth on Sunday to take part in the Armada Autumn Trail Race.

As described in the title it was a trail race through woods, trails, fields and included at least three river crossings, so no chance of staying dry. The course itself was a fantastic 7-ish miles with some cracking views and was "slightly undulating ". It was also extremely muddy!

The event was superbly organised with plenty of marshals on course to point us in the right direction, and shouting words of encouragement.

There was no official time at the time writing, they finished in around 1hr3mins.

Andy Distin and Teresa Holmes completed the Great North Run, which has over 50000 runners and is an iconic race in the calendar. It takes runners from Newcastle over to South Shields and on the day it was reasonable running conditions with no rain, although it was windy in places but the fantastic crowds kept the runners going. Andy completed it in 2:21 and Teresa finished in 2:25.

A group of Trotters took part in the last race of the 2017 Run Exe Summer series on Tuesday 5th September.

Kathryn Steemson was pleased as she knocked a further 50-seconds off her PB from when she did the race in April, finishing in 21:53.  Additionally, this time last year Kathryn hadn’t gone under 24-mins for a 5K, so this shows how much she’s improved. 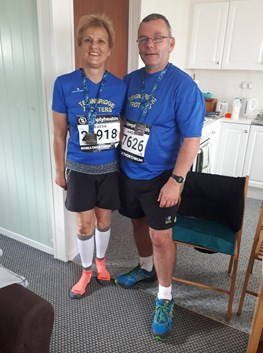 Richard Keatley completed the New Forest Marathon on Sunday, which is a single lapped route and very scenic & undulating.  Weather was nice and cool, but was threatening rain throughout the day and then it chucked it down right at the finish. Richard finished just in time to avoid the worst of it in 4:52 for his 72nd marathon.

Several Trotters took part in the Red Rock Mud Run on Saturday, which is organised in aid of Devon Air Ambulance.  The course takes runners across the Teign Estuary from the Coombe Cellars side to the Red Rock (hence the name of the event).  The runners then run around the rock, and back again. 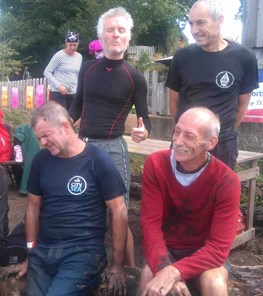 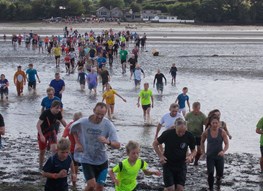 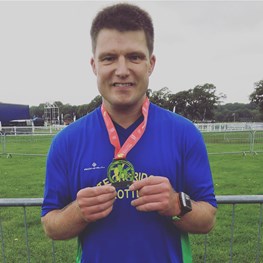 Richard with his medal from New Forest

Runners are going through mud and some times cold waist deep tidal water, so it’s a short little tough race/run/walk. Runners get a medal and a free pint of beer from the Red Rock (again, hence the name) Brewery at the end........It’s a tough one! Trotters who took part include Derek Skinner, Neil Rutley, Christian Robinson and Roger Hales.

Four Trotters took on the challenging Cheddar Gorge half marathon on Sunday.

The National Trust park route was very up and down, all off-road, 1744ft of climb, and following the recent rain was very muddy making it difficult to stay upright. The route was a single lap taking in local landmarks such as Cheddar Gorge, Beacon Batch, Hells Steps and Velvet Bottom.

The runners had to cross through a bog, streams and about 30 styles and kissing gates but the views from the highest point of the Mendips were outstanding looking west to the sea, down the Gorge and across the Somerset levels.

Unfortunately the weather was showery and windy which added a bit of discomfort, however the organisers catered for this with plenty of marquees around the site.

It was unanimous amongst the runners that it was a well organised event but the weather made it a challenging one! 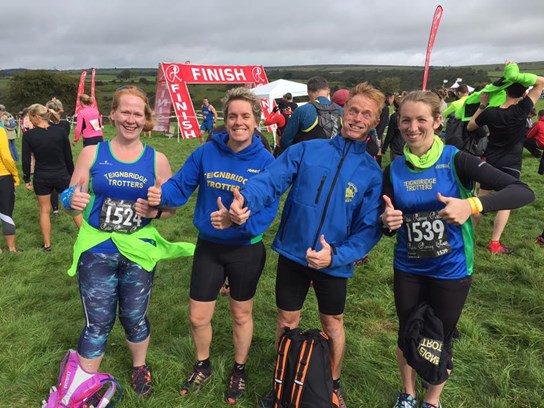 Allen Taylor travelled to the Purbecks on Saturday to take on the Bad Cow Weekender organised by Whitestar Running.

Saturday, Day 1 was the Bad Cow Frolic. The course was based in Burnbake Campsite and around the Purbecks. The lapped course measured 4.4-miles and it was multi-terrain with a small tarmac section but predominantly sand tracks followed by flint and woodland tracks. Allen ran 6 laps for his marathon and finished in 3:59:33 in humid conditions before the rain and thunder came in.

Sunday, Day 2 was the Bad Cow Marathon. The course was the same 4.4-mile laps as the previous day but the weather was a lot colder with heavy rain showers, which made conditions very boggy and slippery. Allen finished nearly 8 mins quicker than day 1 in 3.51.46 for 12th overall.

Please note that Keith Anderson is doing the report next weekend (17th Sept).  Please send any details of races to him.  keithanderson50@gmail.com 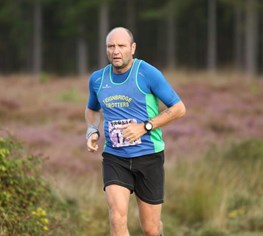