The Jewsons Barnstaple Half & Marathon took place on Sunday 30th September. The Marathon started at 9.00am and headed down the north side of the river first which mean't tackling the airbase at Mile 7-9 before heading back to Barnstaple for the start of the second half which took the runners through the villages of Fremington and Yelland.

The Half Marathon started at 10:00 am. The route took the runners through Barnstaple and onto the Tarka trail towards Fremington.

In the Half Marathon, Rod Payne carried the flag for Teignbridge. Rod finished in 183rd position in a great time of 1:57:54, a staggering 24 minutes faster than his last half marathon earlier in the year. The winner of this race was Shaun Artell from Bideford ACC in a time of 1:00:15.There were 411 runners. 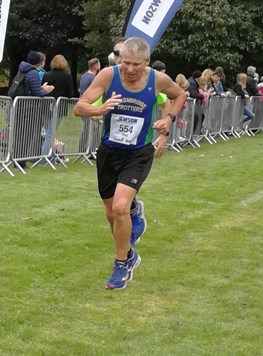 Rod at Barnstaple Half 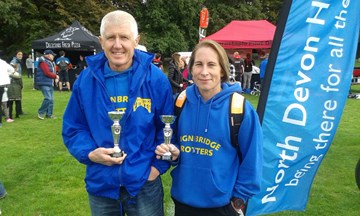 Tracey and Alan with their silverware from Barnstaple Marathon

Allen Taylor took on The Chagford Challenge 30 mile route across Dartmoor on Sunday 30th September organised by The LDWA. There were 3 distances to choose from, 17, 21 or 30 miles, with each race starting at 9:00 with a cut off point at 19:00.

The challenge was a self navigate loop starting and finishing in Chagford. All runners must be able to read a map & follow compass bearings!! Also, runners were expected to supply their own mugs at the respective drinks stations to reduce the volume of plastic used. It passed through Finglebridge, North Bovey, Postbridge and Fernworthy Reservoir before tackling Meldon Hill near the finish. The route was 80% trail.

Allen was the 1st 30 mile runner to finish the challenge in 5.12. A fantastic effort. 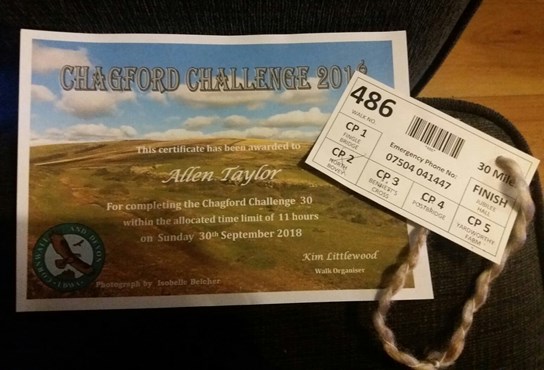 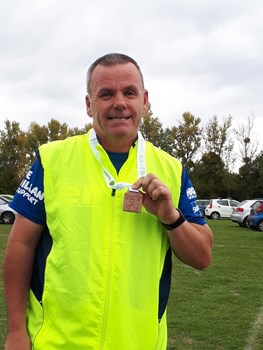 On a busy Sunday of racing, Philip Norden a last minute entry, competed in the Bradleys Exmouth 10k. A large field of 435 runners gathered at the start.The weather was just about perfect with overcast cool conditions. The route took the runners along the Esplanade, before running inland skirting Exmouth cricket ground before returning back onto the Esplanade. The runners had to negotiate this loop twice. Philip thought the course was perfect for some fast times, with just one short hill to negotiate. Philip finished in 165th position in a very creditable time of 51:57. The winner of the event was Doug Amer in a rapid time of 31:30!!

Sunday 30th September was the 32nd running of the Deane DLO Taunton 10K. The race started at Blackbrook Pavillions, Taunton and on a gentle undulating course, took the runners through a residential area into quiet roads through Stoke St Mary & Haydon before returning to the finish at the Pavillions. Andy Distin was the Trotters sole representative from the club, and ran very well to finish in 471st position in a chipped time of 1:00:28. The winner of the event was Daniel Cahill from Minster Millers in a great time of 33:49. There were 642 finishers.

Nejla and Scott Andrews travelled north to compete in the Ikano Bank Robin Hood Half Marathon in Nottingham. Nearly 9000 runners took part in the race. Scott finished in 1687th position in a time of 1:50:28 and Nejla completed the course in a very respectable time of 2:07:29 to finish in 3495th place. Credit to them both for representing the club so far from Devon. 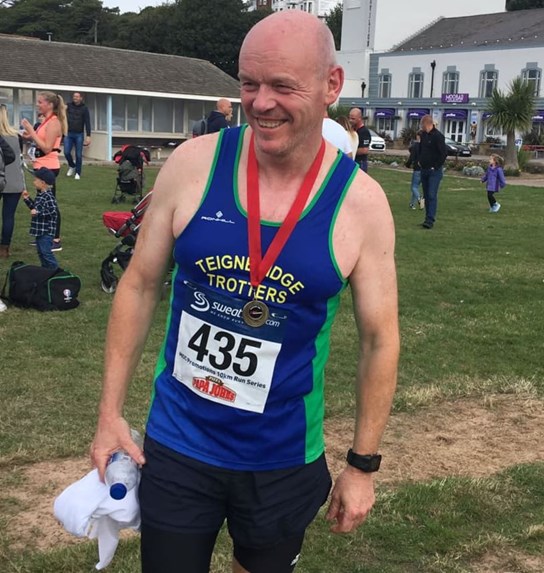