No warm up required on the hottest weekend of 2018 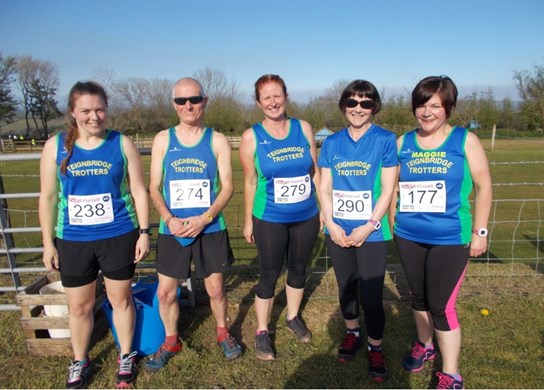 Trotters at The Pennywell Pursuit 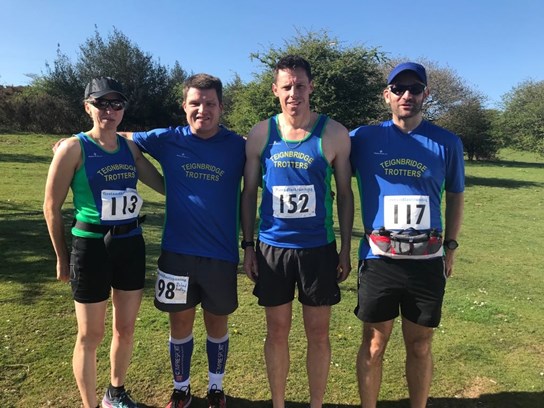 Five brave souls raced the Pennywell Pursuit 10k at Pennywell Farm nr Buckfastliegh in Devon. This is the second running of this event staged by THNN Network for helpers charity. This is a tough hilly 10k which is all off road and is ran through woods and fields in what were hot conditions - all five trotters came home in good times. Susanne Westgate chose the 10k as her Trotter debut finishing in a fantastic 01:17:14.

Oli Prouse flew the blue flag once again in a trail run organised by Croft Ambrey Running Club in North Herefordshire. The Shobdon Wood Race is a 5.3 mile event that is completely off-road along forestry tracks and the Mortimer Trail. It was a very challenging course which consisted of 925ft of ascent and 1096ft of elevation loss plus the warm weather. The runners were rewarded with a tech t-shirt and then treated to a coffee and a doughnut!

Jimmy and Emma Donovan conquered the Hartland Hartbreaker on Sunday May 6.

The Hartbreaker is a 18-mile run around the Hartland Peninsular in North Devon, taking in coastal paths, muddy tracks, steep cliffs, bluebell carpeted woodland, wooded valleys, fields and some sections of country lane. One section is so steep you’re given ropes to haul yourself up (with the added bonus of beer at the top). It’s a fantastically organised race by North Devon Road Runners with competitors offered a host of energy-boosting snacks, cocktails, prosecco, gin, vodka & beer at some drinks stations as well as boring old water. The grand surrounding of Hartland Abbey is the start and finish.

The beauty of the run was offset by the hot, humid weather which made running a huge challenge. Runners helped each other out all the way, motivating each other on which made for a friendly, slightly mad but fun race. Runners had to tough out the conditions, be sensible and run a conservative race because the second half demanded an even footing on perilously steep coast path and a level head.

The official results are yet to be published but Jim clocked an unofficial time 3.50 and Emma 4.43. Both loved it and would recommend it to anyone wanting to take part in a race with the emphasis on fun and adventure, and explore the spectacular trails around North Devon. All finishers got a technical race t-shirt, medal and as much alcohol as they could sensibly imbibe.

On Saturday 5th May Kris Ward, Wendy Goldthorp, Richard Keatley and Ian Porter all took part in day one of the Plym trail marathon weekend.

The course consisted of two out and backs from Clearbrook village hall along the cycle path 27 towards marsh mills.

Conditions were on the warm side,in the low 20s, but luckily 85% of the route was shaded from the direct sunlight by the canopy of trees.
Kris reported that everything was going well until around 24 Miles when he could feel the wheels starting to fall off, however he managed to hang in there and bagged himself a PB knocking 4 minutes of his previous best finishing in a time of 3:24:07.
Wendy was the second female across the finishing line, also bagging herself a new PB by finishing in 4:14:27.

This was Richard Keatley's 98th marathon which he took easy in the warm conditions... not long til DD-Day now...

On Sunday 6th May, Bon Rymel completed the half marathon distance, whilst Paul Sharples Snr took part in the marathon on Day 2 of the event.

Jim & Emma at the Hartland Hartbreaker 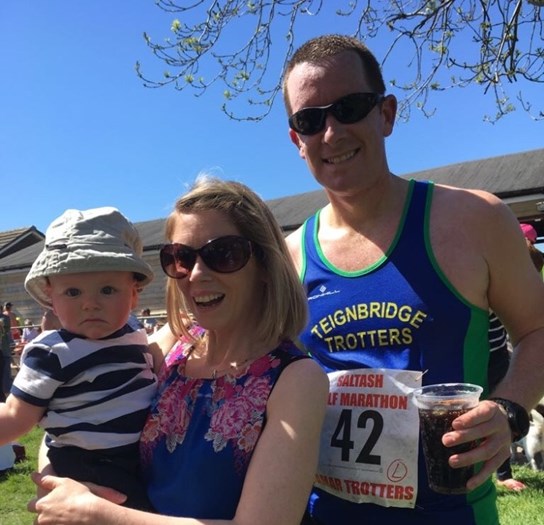 On Sunday 6th May, Kev Sampson took on the Saltash Half Marathon.

Like everyone else racing that day, it was extremely warm for the Saltash Half which is hosted by Tamar Trotters. The route starts from Saltash Rugby Club and is more or less an out and back course. Hills are aplenty on this one with some serious climbs involved, it helped people were out with their garden hoses helping to cool down the runners! The route goes out through the lanes from Latchbrook and is a constant climb up towards Trematon Castle & then loops back again through St Stephens then back to the rugby ground. Kev ran this one several years ago & he's always regarded it as one of the toughest half marathons he has ran and yesterday was no different. Sadly no medal but he did get a tech t shirt for his efforts! The only other Trotter I saw competing was Worzel.

Although 300 Race capacity only 159 competed. Ironically Kev was race number 42 & happened to finish in 42nd place! This was a good training for Kev who is to run Dorchester Marathon at the end of the month.

The 2018 North Dorset Village Marathon was the 10th anniversary of the event. It was the first time Dorset Doddlers have organised it, keeping the high standard of their predecessors, the Gillingham Trotters. The event started at 8:30 in Sturminster Newton and took runners along a rolling route ( not undulating, but not flat) on quiet country roads through many villages including Stalbridge, Stour Row, Margaret Marsh, Child Okeford and Manston. The early start was appreciated by the runners as, in the early afternoon, the temperature reached the mid 20s – as forecast. The route had little shade and very little breeze. The 9 official water stations en-route were appreciated. Local support was plentiful, from ad-hoc water stations, to encouragement. After a rest, runners enjoyed a hog roast, which was included in their entry fee!

207 runners completed the course. Of the 6 Teignbridge Trotters who ran it, Roger Hayes and Ruth Johnson had completed the London Marathon 2 weeks earlier in equally challenging conditions. They completed it in 3:30:50 and 5:02:55 respectively. In this, his first Marathon, Neil Rutley crossed the line in 4:19:32.

Graydon Widdicombe made the most of the Bank Holiday weekend by doing a double, as he also took part in Milton Keynes marathon on Monday along with 2027 other runners. The course is a flat one and ends at MK Dons stadium, and Graydon finished in a time of 4:49:36.