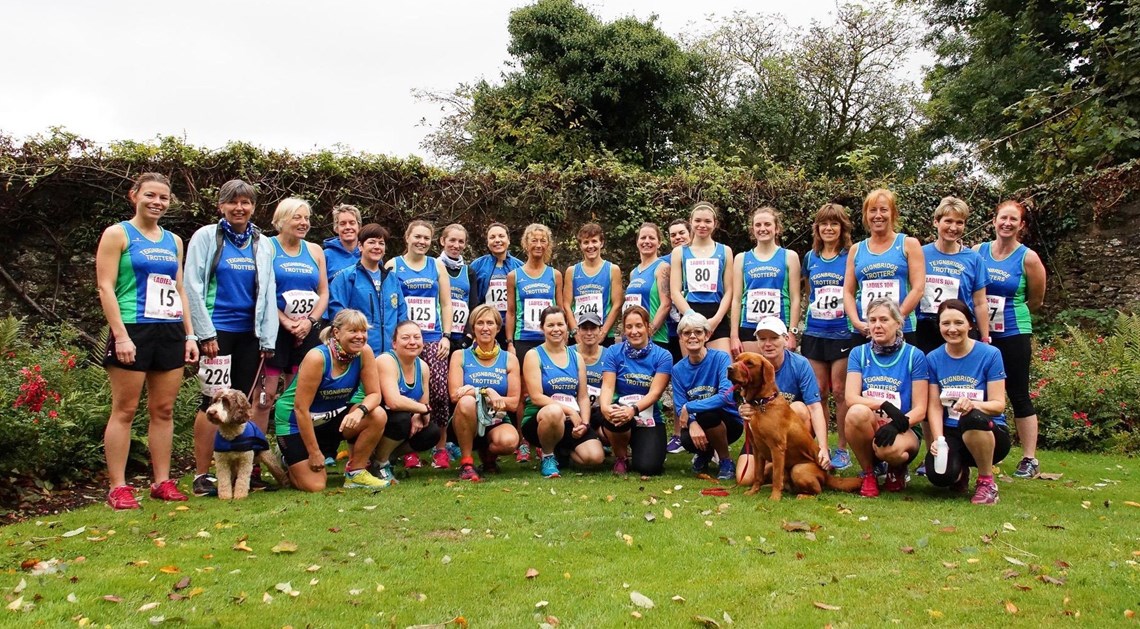 A sea of blue before the start of the Ladies 10K

Teignbridge Trotters staged the annualNewton Abbot Dornafield Ladies’ 10K, which starts and finishes at the beautiful Dornafield Caravan and Camping site, and this year was the 21st running of this popular ladies race at this superb venue. Tracey Jolly, the race director & chief marshal, Rod Payne, worked so hard to make this event run so smoothly. Thanks must go to all the trotter volunteers, who either marshalled, manned the water station, took the timings and positions, the cake stall run by Lucy Evans and anyone else who helped. A great effort by all.

The weather on the day was changeable but the temperatures were perfect for some good times. The scenic course follows undulating rural roads throughout, with little traffic, and passes through local hamlets. And, at the finish of course, there were the legendary Trotter cakes! All our lady trotters ran superbly and represented the club admirably.

There were some notable performances, but the out standing performer of the day must go to Jacki Woon who smashed the previous club record in the MV 55 category by an unofficial, still to be confirmed, 6 minutes and 39 seconds!! An amazing achievement Jacki. On top of this news, our ladies took hoards of silverware with some great performances. On top of Mandy Wheelers 4th place, she was 2nd in the MV45. Jackie was 1st in the MV55 & Sarah Pike, who is now making a habit of winning trophies won the MV40 category. Our ladies also filled the two top spots in the team event. A special mention for Tracey Elphick. It was great to see her back after her terrible injuries suffered a few months back.

Ollie Prouse ran theBridge to Bridge Ultra Marathonon Saturday 22nd September. The event was organised by Stourbridge Running Club. The event started in Bridgnorth and ended in Stourbridge via Stourport.

It was a fairly flat course comprising of 4 stages. The first two stages took the runners along by the River Severn and then through fields and woods.The conditions underfoot were wet & muddy thanks to the recent wet weather. The final two stages took the runners along the Staff & Worc Canal.This particular part of the race proved to be long and tedious with the now incessant rain making life even more difficult.The marshals helped matters with their fantastic support, especially the ones positioned near to the pubs!!

Ollie had the event pencilled in his diary 6 weeks ago but was unable to commit to the training required leading up to the race. This makes his effort even more commendable!!

Although official results aren't in as yet, Ollie finished in a very respectable time of 7 hours 2 minutes. It was all about finishing the race which Ollie did, and he says he has now regained his mojo to enter similar events in the very near future.

This is a fantastic event and incredibly well organised. As it’s a point-to-point course, the organisers put on coaches for the few thousand runners, taking them from Inverness out to the middle of nowhere, 26.2 miles away. The logistics alone must be a nightmare as Graydon can’t imagine there are any spare coaches left in the Highlands! The competitors then have the job of running back.

Graydon had been nervously monitoring the forecast all week as it looked ‘variable’ to say the least, but it ended up being perfect. Conditions were cool, but not too cold, and there was hardly any wind for the whole race. There were a couple of heavy showers during the race but on the whole it stayed dry.

The course itself was spectacular, taking the runners along the edge of the famous Loch, and the views were stunning and somehow the air was much fresher/clearer. The event is run on closed roads and is known as a quick course so although not a PB, Graydon was delighted with a finish time of 3:27. His legs were shredded at the end though!

The medal and T Shirt are fantastic, and at the finish, runners are treated to soup and a meal to help them recover. Amongst other things, the goodie bag also included a can of soup and some shortbread.

Graydon loved the event and would happily recommend it to anyone who is looking for a marathon that is a bit different. The Highland hospitality did not disappoint.

Two of our most popular runners, Andrew Fox and Christian Robinson ran a 171.1 mile relay team race calledThe Ragnar UK White Cliffsin aid of Cancer Research & Autism in children. All 5 of the team travelled by mini bus to Brighton, where they stayed for the night, planning their strategy for weekends race. The race would take the runners from the start at Maidstone, Kent, up the coast to Margate, around Dover before finishing at Brighton.

Each team member would have to run 6 legs ranging from 4 to 9 miles. The weather was quite favourable for the start of the race with light rain and wind, but the runners knew what was looming!! The tail end of a hurricane!! The race organisers must have seriously considered cancelling the event. Foxy ran the first leg, a 6.9 mile stretch. The others jumped in the van and made their way to the finish of the first leg. Christian ran the 5th leg, a 7.7 miler in 52 minutes. By this time,the weather was turning. To make matters worse, the teams captain became unwell and could only run the shorter distances, putting more pressure on our trotters.

They ran into the night, becoming increasingly tired, wet and uncomfortable. By the early hours of the morning, with fatigue setting in, and injuries occurring, some of the legs were cancelled. The toughest leg was still to come, and it was left to Foxy and Christian to complete a 6.6 mile leg called the Ragnar, which was a trail up and down the Severn Sisters of White Cliffs. The boys eventually managed to complete the leg in 1 hour 15 minutes, highlighting how tough it must have been. The team eventually completed the race in a very creditable time of 27 hours and for their efforts won a medal, beer and a pizza. More importantly, the lads raised £2000 for the charity, so a huge well done to the two of them.

Jamie Barnett travelled to Bristol to run in theGreat Bristol Half Marathon.He finished in 26th position in a time of 1:14:50. The weather was just about perfect, and for the first 5 miles Jamie was travelling well. Unfortunately, the call of nature mean't a quick stop behind a tree. All his momentum was gone, and from there on in,things got gradually worse ending up with his legs seizing up. To his credit, he continued to the line and finished still in a very respectable position. More lessons to be learnt along his career pathway.

Onwards to Frankfurt for the next instalment of Jamies quest in becoming the all round athlete we all know he will become. 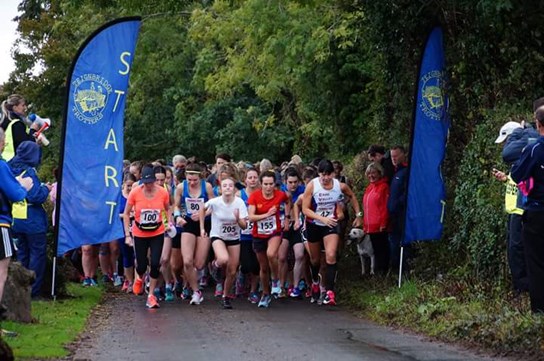 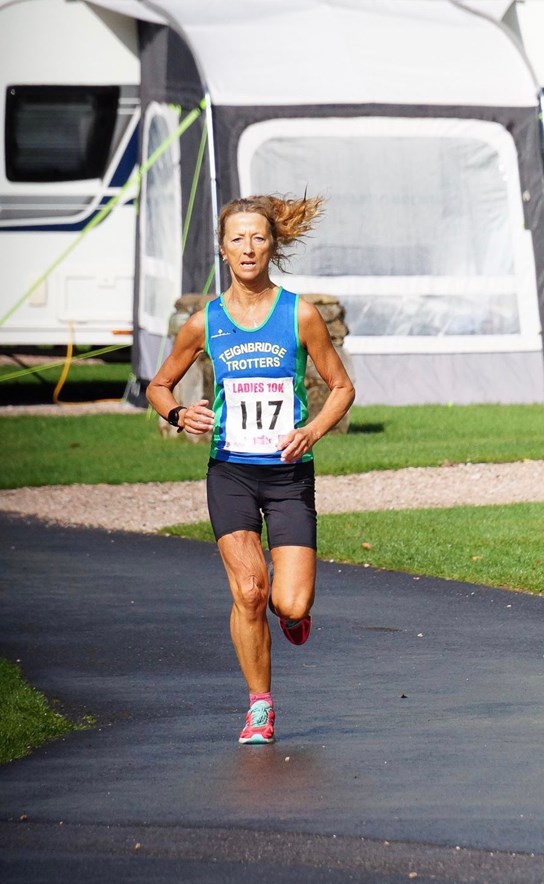 Jacki Woon on her way to smashing the FV55 club record 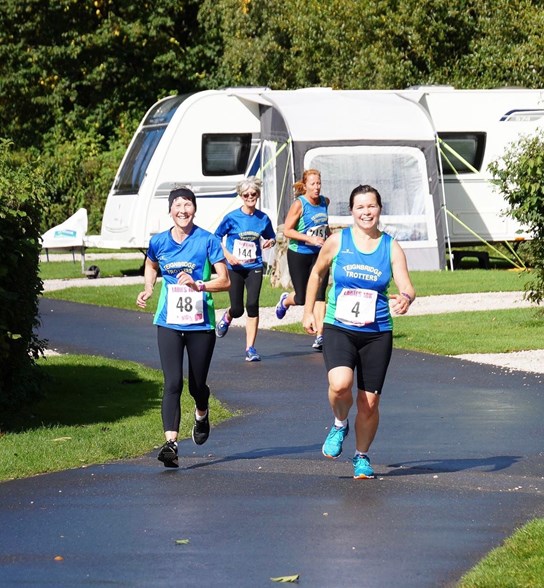 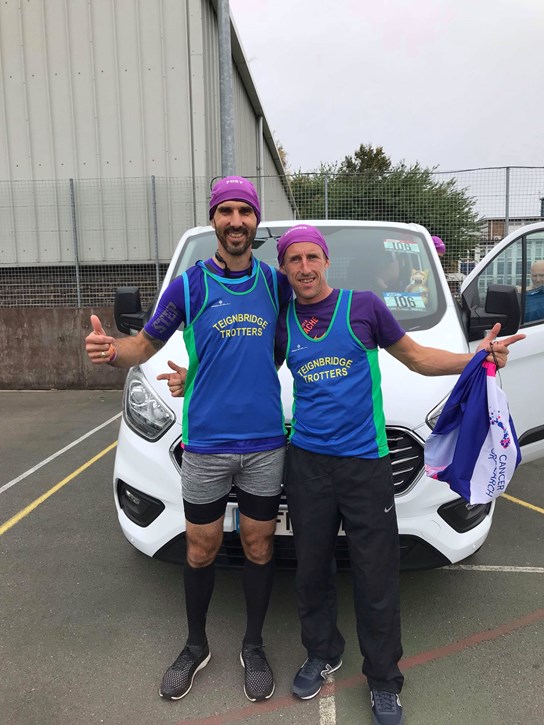 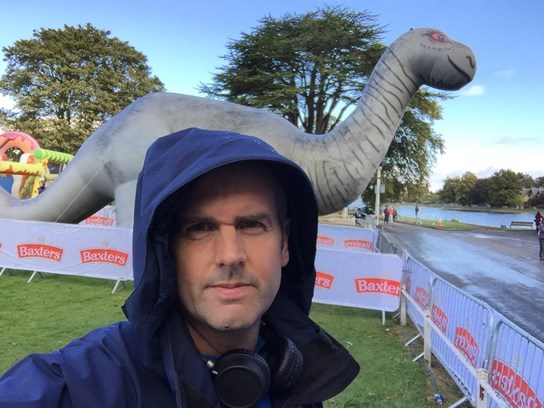