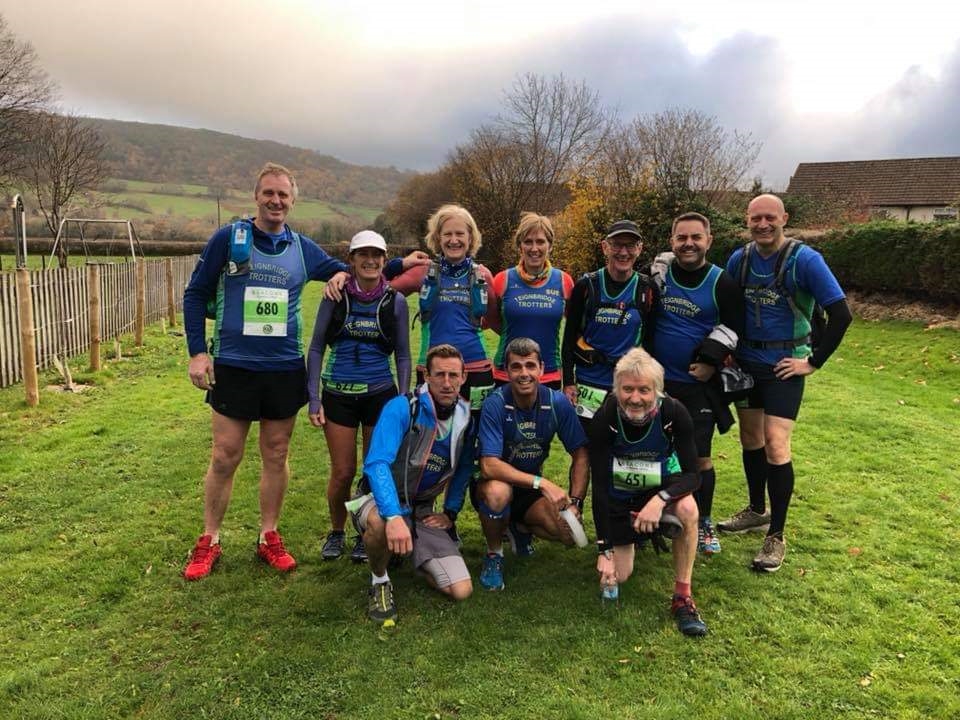 On Friday 16th, ten Teignbridge Trotters travelled to Taly-bont-on-Usk in South Wales, to take part in the Brecon Beacons trail marathon. This race ran alongside the longer established Beacons Ultra. They stayed at the Danywenallt Youth hostel. Their accommodation was comfortable which mean't that they all had a decent night's sleep. They were all raring to go Saturday morning!! The weather, although grey to start, soon brightened up throughout the morning, to leave blue skies and reasonable temperatures.The course varied in gradients as did the under foot conditions. After a flat stretch along the local canal, the route steepened over Tor-y-Foel, a grassy hill (551 m) which gave the runners a taste of things to come. Next to test the field was a long steady climb through forest to the open expanse of the Brecon Beacons. The path at this stage became more strenuous on the approach to Pen-Fan, at 886m, the highest summit in Wales. Then came a quick nip over Cribin, a mere 795m, before a long stretch of downhill before negotiating a tedious two miles along the canal to the finish. The Trotters formed three teams,all finishing in very creditable finishing times, achieving a clean sweep of the team prizes. Team A: Roger Hayes (4:17:04), finishing 11th overall out of 150 finishers. Christian Robinson (28, 4:55:49), Derek Skinner (51, 5:28:36). Team B: Nathan Elphick (79, 5:55:02), Kim Nichols (105, 6:31:23), Mark Wotton (111, 6:37:28). Team C: Ruth Johnson (129, 7:00:04), Sue Tremlett (130, 7:00:27), Keith Anderson (146, 7:54:06) plus Ryan Anthony (146, 7:54:09). A superb effort from all out trotters. Plans are already being made for next years event. 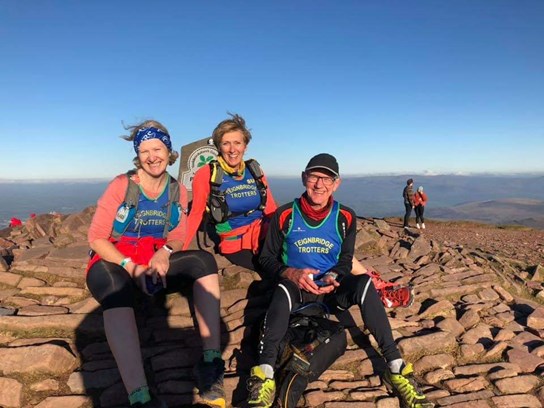 Ruth,Sue and Keith at the summit

On Sunday 18th November, The Drogo 10 took place. An exciting and challenging 10 mile multi-terrain race that started and finished at Castle Drogo, taking in views of the stunning Teign Valley. The course has been extended this year to make it exactly 10 miles, so PB potential is guaranteed! From the castle, runners headed down the driveway for 600m and across the grass and through the woods on Piddledown Common before descending steeply to Sharp Tor and the main downhill track to the river. This is a long, occasionally narrow and steep section where overtaking proved a tricky manoeuvre. Ahead lay the new bridge, built after the old one was washed a way by floods several years ago. From there on, it was a mainly flat course winding its way through woods, tracks and paths. At 3 miles the runners encountered the first major hill. Half a mile of twists and turns, so knowing where the top finished was difficult to judge. Near the top, an unexpected but welcome sharp left took the field back downhill. The track then got narrower and steeper as it plunged down towards the river before a sweeping bend to the right marked the start of the long haul up the far side of the gorge. This is the time where the runners needed to dig in and keep going. The hill wasn't as steep as the previous one, but their legs are still complaining about the last one. A steep downhill, back to the river greeted the runners. A two mile flat section then led them back along the Teign. Eventually the athletes reached Fingle Bridge and a water station. Fluids were advised in preparation for the famous Hunters’ Path hill back to Drogo. The path then suddenly flattened out and a stunning view of the Teign Valley provided the runners some rest bite before the final undulating half mile to the finish. A last few steep steps, across a flat woodland before the tired runners emerged back at the castle and the finish line. 485 runners finished the gruelling 10 miler. The event was won by Simon Minton in a time of 1:04:32. First Trotter home was Ewan Walton,finishing in 30th position in a great time of 1:15:02. The other Trotters positions and times: Kevin Sampson (153, 1:32:02), Graydon Widdicombe (166, 1:33:22), Kim Knight (187, 1:35:42), Natalie Cusack (257, 1:42:39), Emma Pearcy (360, 1:54:29), Paul Sharples (387, 1:59:22), Sharon Sharples (433, 2:12:40). 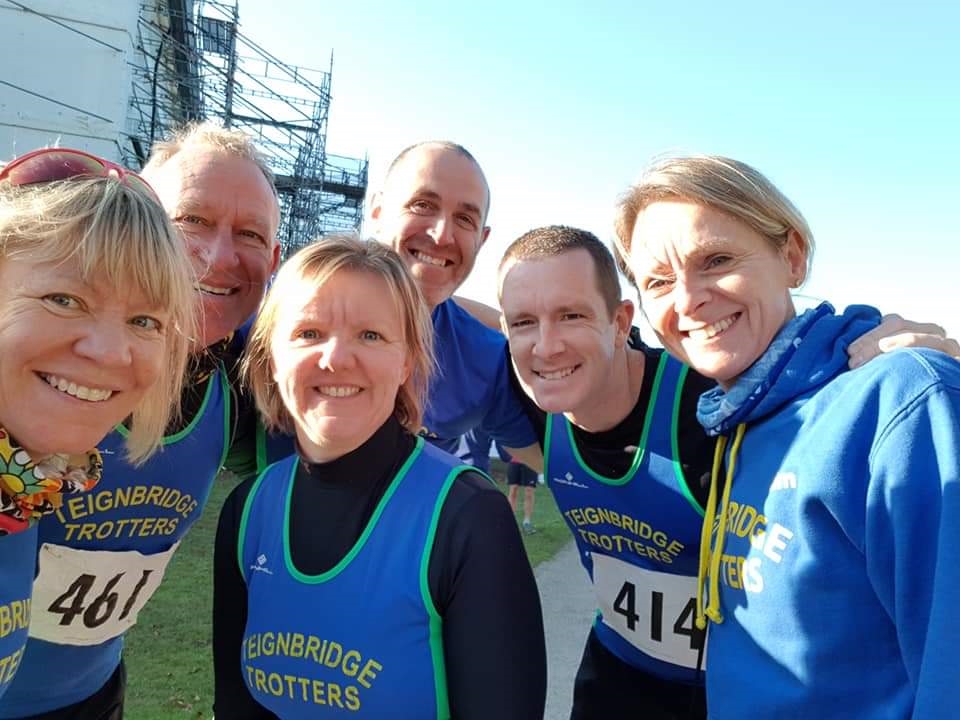 Upbeat Trotters before the Drogo 10

On Monday 12th November, Graydon Widdicombe took part in the Dorney River Run, which was a 6 hour challenge organised by Running Miles.This was a new event and was ran on paths alongside the River Thames, more-or-less adjacent to Dorney Lake with 4 laps being needed for the marathon distance. It was a really picturesque and flat route with each lap starting at the river boathouse at Dorney Lake and following the Thames Path towards Windsor, passing the Church of St Mary Magdalene, Boveney Lock and Windsor Racecourse before turning back once in view of the castle. The route then continues past Dorney Lake (where runners could stop mid-lap at the aid station if required) and continues towards Bray Marina before turning around to go back to complete the lap at the boathouse.Graydon completed the marathon in 3:52:30, which he was pleased with as although it was a flat route, he’s not too fond of the mud! Out on the course there were a couple of runners who were plainly running well within themselves, and it turns out that one - Nathan Flear - is hoping to qualify for the Team GB 24hr team, where he needs to do 150+ miles in a 24hr event in order to qualify. Who knows if he’ll get into the team or not, but he was using this event as a training run where he comfortably managed 39 miles in 5:44.The medal was a nice one, which included a photo of Windsor Castle and the organisers allow the runners to choose 6 items from a wide range of goodies available. Graydon filled his bag, possibly unsurprisingly, with 6 different bars of chocolate….