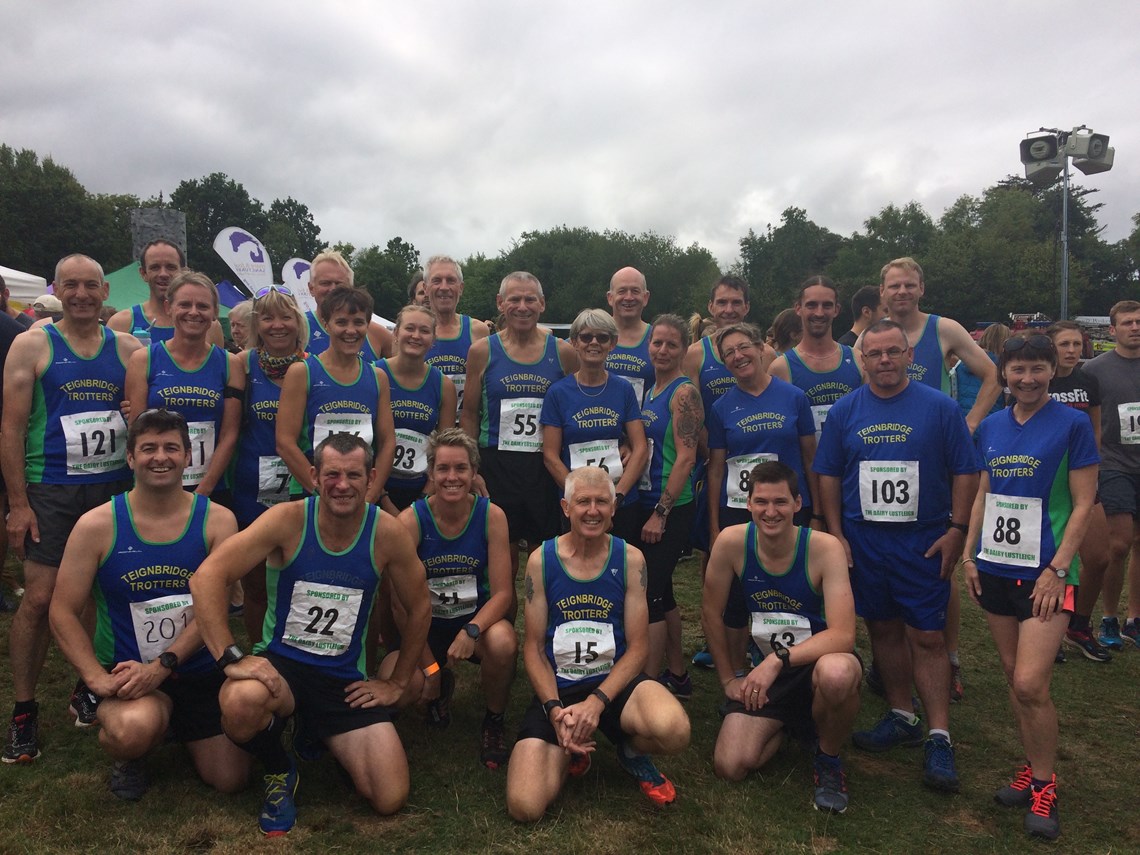 An army of Trotters at Lustleigh

On Wednesday 15th August Tavistock AC and Tamar Trail Runners staged the first Trio of Tors. Approximately 6 miles. On their previous event, the Neolithic Fell Race, 2 weeks before, had seen Dartmoor at its beautiful best. The Trio of Tors took runners up a gentle path to Per Tor, then Vixen Tor, and on to Cox Tor, heading home via Pew Tor. In clear weather, it’s a beautiful route. On the evening of the event low cloud made the event more challenging. By the time the middle-of-the-field were at Cox Tor, the visibility was measured in metres. The runners appreciated all the markers and friendly marshals. Neolithic winner Adam Holland was second to Oliver Smart in 41:01. Dartmoor Runners’ James Jackson was third and the Runners’ Robyn Carter was first woman. Teignbridge Trotters’ Eleanor Taylor took a less-than-optimum route to and from Cox Tor. Eleanor was 100th out of 105 finishers.

On Friday 24th August, the Torbay Velopark relays took place. A wet and windy evening made the 3km leg for each team runner very testing. The Trotters were well represented with a total of 9 teams entered across all age categories. Thanks must go to Eleanor Taylor & Lance Mason for all their efforts in putting the teams together. The outright winners were Tavistock Run Project (A) in 36:15. Adam Holland ran the lead leg in a remarkable time of 8:47!! Each and every member of each Trotters team gave their all, and the support they received on the side lines from the all the other members (runners & non runners) was fantastic. The best winning combined time for the Trotters were the senior men (Trotters 'A'), comprising of Christian Robinson, Tim Pratt, Graydon Widdicombe & Nigel Barnett in a time of 43:55. The only silverware to be won though was in the Vet Female 40-49 category. This team is fast becoming a very successful quartet having won events in the past. The team members were Helen Anthony, Mandy Wheeler, Jacki Woon & Sarah Pike in a combined time of 47:20.

On day one Allen Taylor ran the East Farm Marathon which comprised of 8 laps around the surrounding area of the farm, through fields, woods, a cornfield, flint tracks and then the famous love station. Allen says it's a very challenging course. He had a great run though finishing 3rd overall in 3.47.47. Josh Taylor opted for the East Farm Half Marathon which was 4 laps of the same course and finished in 2.11.35.

Day two Allen competed in the East Farm Frolic. This is a 12-hour challenge running as many laps as you can around the same lapped course as yesterday going solo or in teams of 2, 3 or 4. The weather turned nasty with horrendous rain and wind. Allen running solo completed 8 laps for a marathon in 4.08.35.

Overall a good double marathon for Allen this weekend!!

Scott Wiggins was the clubs sole entry in this years Great Escape rnA half-marathon. Starting from Princetown in the heart of the Moor, the route took the 137 runners across the last 13.1 miles of THE CROSSING, with big, wide open spaces. Many have tried escaping the Prison at Princetown and, because of its remoteness, have been recaptured. The course was fully marked and marshalled course, with 2 Aid Stations/Water stops with food and refreshments. The route crosses the head of the Erme Valley and traverses the Erme canyons, with some interesting moorland vistas along the Abbots Way before the long descent into South Brent. A real taste of Dartmoor trail running. Weather conditions were reasonably good as the convicts plotted their escape. Scott decided however to give the authorities the run literally by running an extra mile further than anyone else!! He still managed a respectable time of 2:07:04 to finish in 27th position. The winner was Oliver Thordgood in a great time of 1:22:43.

A few Trotters made the trip down to Clearbook on the edge of Dartmoor for the Plym Trail Summer Marathon weekend, excellently organised by Firstandlastrunning. These are very friendly, low key events and the race directors - Davey Green and Lesley Coulton - are well known on the marathon circuit, both having completed over 100 marathons. The course is the same both days, as it is for the other race weekends during the year, and it is essentially an out-and-back route, done twice (once for the Half distance). It’s a picturesque course taking the runners along an old railway line, which is now Cycle Route 27. The runners can take in some of the lovely views, as well as the marathon runners having to run through a long tunnel four times during each event. The course is deceptive though as the outward section is basically downhill (not steep, but more-or-less constant) which of course means the return leg is uphill.

On Saturday 25th August, Roger Hayes, Graydon Widdicombe and Chris McIntosh all completed the marathon distance, in what were good running conditions - cool, with no wind or rain. Respective times and positions were: Roger Hayes (5, 3:26:00), Graydon Widdicombe (6, 3:46:01), Chris Mc Intosh (17, 4:21:40)., which was a course best for Graydon. There were 29 finishers.

On the Sunday, Graydon Widdicombe and Chris McIntosh turned up again for the marathon, but the conditions were far from perfect as it rained for the majority of the event, and it actually began to get quite cold. Graydon managed 4:27:05, whilst Chris completed it in 5:22:34. Meanwhile, Bon Rymel ran the Half Marathon and managed a great PB finishing in a time of 1:47:49 for 4th place. There were 27 finishers for the marathon and 13 finishers for the Half.

This weekend Louise Stokes and Suzie Mills travelled to Portishead, Bristol to take part in the 401 Festival of Running 2018. The event comprised of four races over two days adding up to a Marathon. A 5km and a Half Marathon on Saturday followed by a 10km and a 6.1km races on the Sunday. There was a medal for each of the four races plus an extra (5th) medal for doing all four races (The 26.2 mile Challenge).

Louise said she found the hill at the start of every race very hard. The 5km race made the Half marathon that much tougher,which included an hours break between each race. Trying to keep warm until the half started wasn't easy. On the Sunday, the rain was horizontal & the wind was cold which made the two shorter races a real test of endurance.

This 5-mile race starts by the village church and takes in quiet country lanes, open moorland towards White Tor and woodland paths. The first two miles are tough: straight up to the moor on a 1,200ft climb while the final three are a glorious descent back to Peter Tavy. The 15th annual event which offered superb views of west Dartmoor & the event coincided with the village fair and has a fun run too giving it a friendly family atmosphere.

Jim clocked 38mins and Emma 49mins. All finishers got a medal. 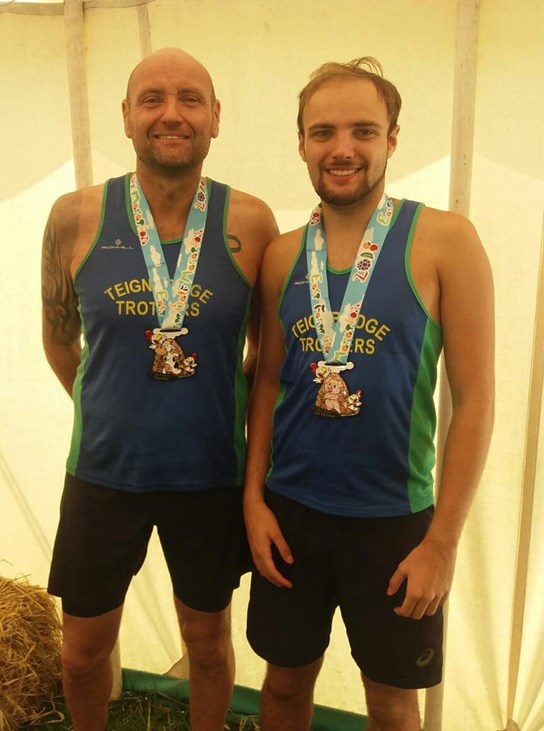 Josh and Allen at Blandford Forum 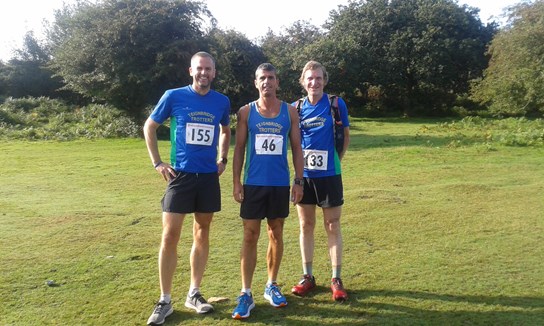 The Three Amigos at the Plymouth Trails 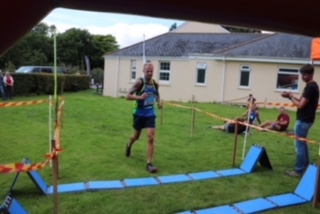 Scott having completed his Escape... 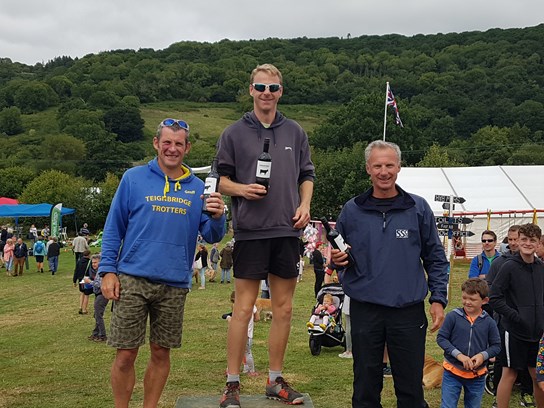