Puretrail staged the 5TH running of their Race the Tide on Saturday 29th May. There were three race distances on offer, but the true distances were further than advertised! The long marathon was almost 29 miles, the long half marathon was 15.5 miles & the watery woodland trail was 8.5 miles long. All three trail races were run in the glorious setting of the privately owned Flete Estate, Mothercombe, South Devon. Three routes followed private footpaths, the South West Coast Path, bridle paths, fields and woodland.

The weather conditions were superb, but unfortunately the temperatures rose as the day progressed which brought into play the problems of dehydration and cramping. 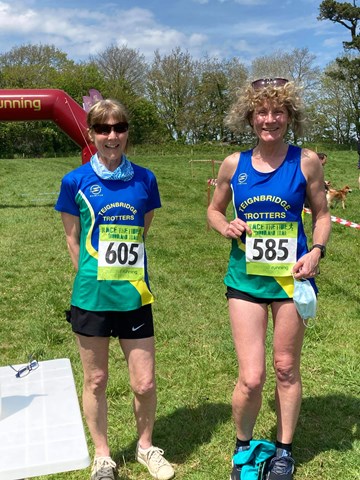 Susanne & Julia out run the tide at Wonwell beach 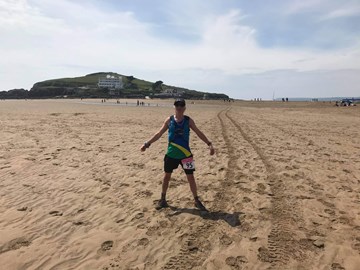 Derek has time to soak up the rays at Bigbury 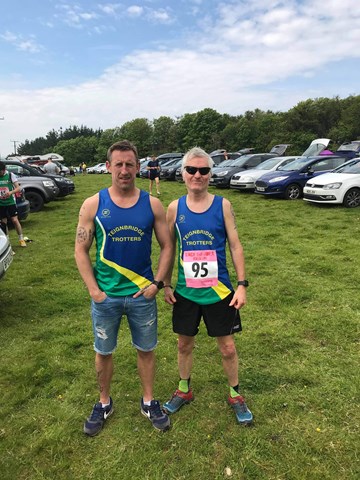 Christian and Derek look pumped to beat the tide

Derek Skinner decided to tackle the extended marathon. The route incorporated the South West Coast Path on both sides of the estuary including a beach section at Bigbury-On-Sea and a run across the causeway to the privately owned Burgh Island. At the top of the island the runners descended back down and across the causeway before venturing on a roller coaster ride up hills and down to the shoreline. At Wonwell Beach the runners had to race the tide, crossing the estuary towards Mothercombe. At this point, a circular route took the marathoners along more scenic coast paths before tucking inland across South Hams farmland before returning to the Erme estuary and the finish.

Derek struggled in the hot conditions but drew on his reserves of strength and stamina to finish in a very respectable time of 06:58:07 to take 65th place.

In the long half marathon, Christian Robinson, still on the covid comeback trail ran superbly to finish 20th in a time of 02:33:08. The route was a combination of woodland and estuarine trails. There were 151 finishers

The Watery Woodland Trail was primarily run around the Estate, with three hills to tackle before racing the tide at the 7.5 mile point.

Susanne Westgate & Julia Street were the Clubs two representatives, and both performed admirably. Susanne won the FV 60 age category while clocking a great time of 01:37:56, placing her in 77th place. Julia finished just behind in a time of 01:38:18.There were 145 entrants.

White Star Running were the race organisers of The Weekend at the Races over the bank holiday weekend. Four Teignbridge Trotters travelled east to Moreton, near Dorchester, on what was to be a glorious few days for running.

Saturday 29th May heralded the start of the Moreton marathon with a 9:00 am start. Roger Hayes, the Clubs sole representative was looking for another good run after his fine Worcester marathon time.

The well-marked out route took the runners through a private estate owned by the Frampton family. There were various terrains to negotiate including tracks, six miles of fields with grass a foot long, sandy paths and shaded dense woodland. The original route was changed due to flooding on certain areas of the course, having had days of rain on the lead up to the event. The second of the two lap race was slightly easier because the long grass in the fields were flattened by all the runners, creating a defined path to follow.

As the race progressed, the temperatures rose causing Roger to suffer terrible cramp at 19 miles. Roger battled on to finish in 3rd place in a time of 03:59:44. He also won his age category. There were 103 finishers. 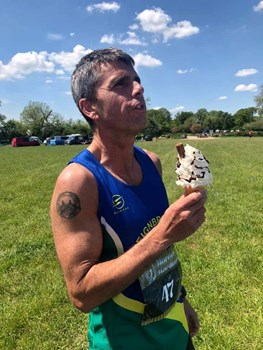 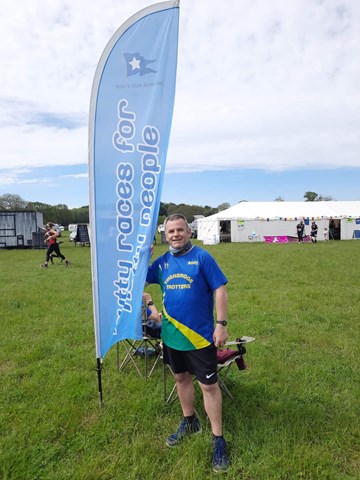 Suzie Mills has rediscovered her love for running it seems having competed only last weekend! Suzie took part in the Moreton 10, with the route centred on the marathon course. A very technical course, Suzie ran superbly to finish 70th in a great time of 02:18:39. There were 109 entrants.

On Sunday 30th, the Unicorn Frolic was contested. Suzie Mills, fresh from her run the day before and Andy Distin took part as solo runners in a format that allows runners to do as much running as you want in a 12 hour period.

Andy was pleased with his long awaited reappearance. He completed 2 laps, a distance of 10.5 miles in a very decent time of 02:32:20. Andy finished in 59th spot in the male division. 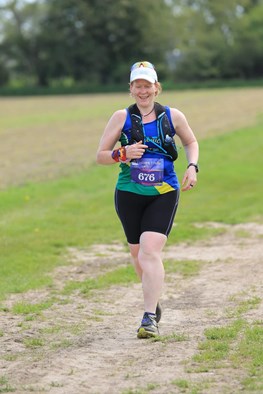 Suzie Mills goes from strength to strength with another race double