Sunday January 24 was the second race of Teignbridge Trotters Championship, the Braunton 10, in the paradise of North Devon.

This tasty race is organised by North Devon Road Runners. It starts at North Devon Athletics Track and takes an undulating path out along country lanes towards Ashford and back through the pretty village of Heanton Punchardon. Two climbs and a fast descent - with panoramic views of the Taw Estuary, Braunton Burrows and the finishing line on the track - makes for a rewarding morning out.

Twenty-two Trotters headed up the A361 to take part.

The ladies were led home by Louise Gentry in 1:16.23 99th overall. Keith Anderson scored himself a new PB at that distance and was third MV60 finishing in 1:20.06, 135th in the final standings, and Roger Easterbrook demonstrated real Trotter class, sportsmanship and a damn good sense of humour by completing the race at a walking pace after busting his ankle seven miles in.

*Richard Keatley has clearly been eating his Weetabix having completed a double marathon over the weekend (23/24 January). With it being part of his bid to become a member of the hallowed 100 Marathon Club he travelled to Kent to take part in the Dymchurch double whammy organised by Saxons, Vikings and Normans Marathons.

The route for each race is five ups and downs of the town’s sea wall from an old coastal defence fort at one end and a Martello tower (a small defensive fort) at the other end.

He said: “After tapering down for 11 days, I was eager to get out and run my first double back-to-back marathon in two days.

“With the first run complete, it was getting up for the second day to do it all over again, that was going to be strange and with not just going straight home. The weather was quite kind to us all for January. it was the last six miles of the day and was to be the tester as I had never ran this far before in my life.

“Running and looking at the sea view, I felt so alive and thought when I finish it'll never get any better than this. Amazing race and a true test of endurance to be able to complete two marathons in two days.

“I also learned a bit over the weekend from my cousin with multiple day events. I would recommend for anyone to push themselves and move the comfort zone.

*Kevin Woodard set a new 3k personal best at a short distance race organised by Exeter Harriers. This was limited to 75 entries with only a handful of places available on the night and shouldn’t be confused with the Exeter 3k Series which takes place next month. Kevin ran strongly and came fourth in 10.20.

Photo of Sara Collman and the posse in blue at Braunton 10 and Richard brandishing his double marathon medals. 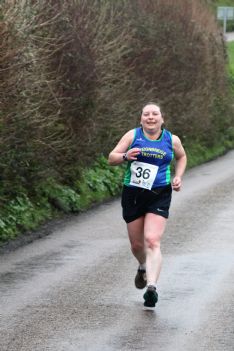 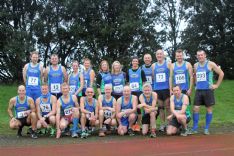 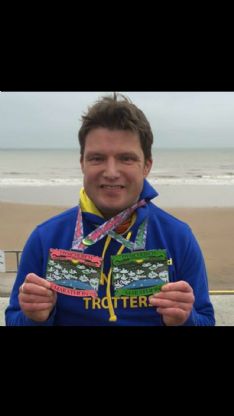