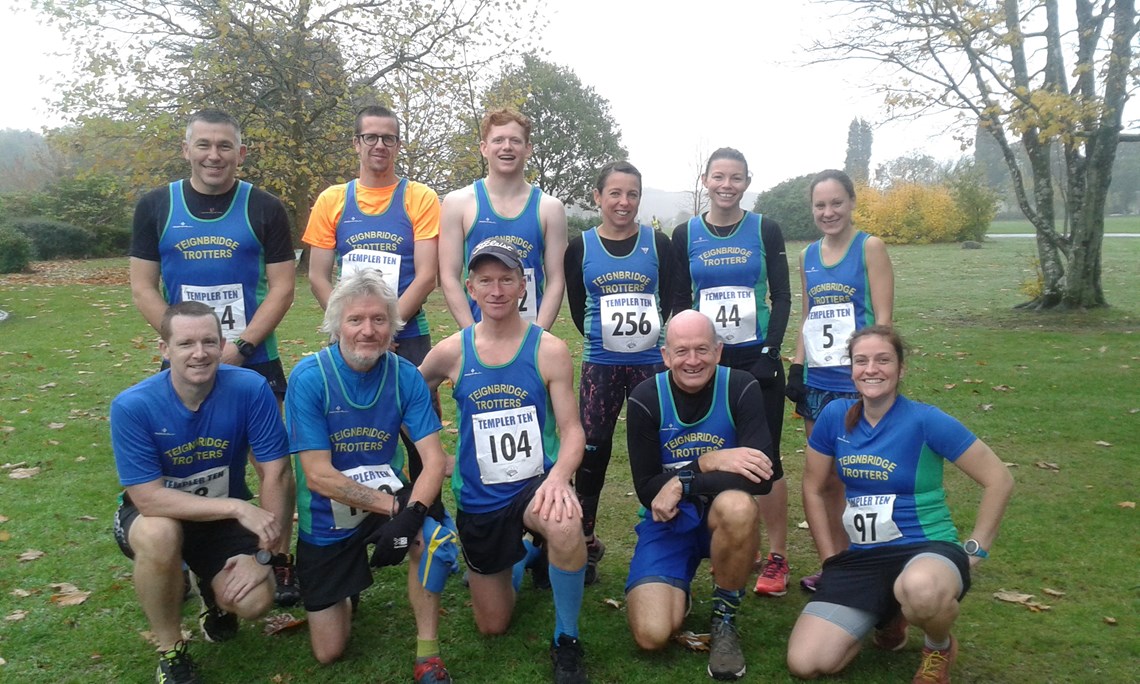 Teignbridge Trotters staged their last race of the year – The Templer Ten on Sunday 4th November. The race is a multi terrain 10-mile course starting and finishing in the wonderful grounds of Stover School, Newton Abbot. The Templer 10 race has a lot of history surrounding it. In fact, a few of the descendants of the Templer family were at the race on Sunday,

Stover School was built as a Georgian Mansion. It was commissioned by James Templer (1722-1782) and completed in 1777. Three generations of the Templer family held the estate until 1829 when it was purchased by the XI Duke of Somerset, remaining with his family until after WW1”.

The Temper Way is today an 18-mile stretch that runs between Haytor in Dartmoor and Teignmouth. Both families pioneered the extraction and export of Ball Clay and Datmoor granite on a commercial scale, using the quarries and transport system created by the Templers.The granite was removed from Haytor quarry and using a granite tramway moved down to the Stover canal and onto the sea. The surviving evidence of the industrial past can be found along the route of the Templer Way”..

The course is 90% off road, making the route a difficult challenge especially at this time of the year. Many local runners target this race due to the toughness and competitiveness that the race supplies. Chris McIntosh, in his new role as the race director, made sure all the behind the scene activities were put in place and with the help of Chief Marshal, Gary Caunter. A special mention to the enthusiastic back room staff, including the time keepers, commentary team, caterers, registration officials and the many Trotters lending their support around the course. Chris felt that all the effort was well worth all the hard work having been given lots of positive feedback from the competitors.

To start off proceeding at 10:15, a 1-mile fun run for the kids took place, making it a great family event. The weather conditions were drizzly as the 58 children gleefully set off on their way. The winner was Iona Farquharson representing Torbay AC in a fantastic time of 5:23!! The Teignbridge Trotter children who took part included Lucy & Harry Ayling, Toby & Freya Easterbrook and also Chloe & Toby Langler. Possibly the new talents of the future?? Well done to all who took part.

A new club record was achieved on the 20th June. Bob Small took part in the Devon County AA 10,000 metre championships.This is a track event held at the Exeter Arena. The previous over 70 record was held by David Taylor in 2017 with a time of 49:05. Bob established a new record by clocking an outstanding time of 48:10. Well done Bob.

On Wednesday 31st October, Jolly Running staged their second event,The Dark Halloween. The 5k & 10k races were staged at Cockington and the nearby Scadson Woods. Both races were run over varying terrain, including gravel paths, grass tracks, woodland trails, a stream crossing and a stretch of tarmac path around the lakes. Fancy dress wasn't mandatory, but was encouraged. Many of the runners indeed dressed up in their spookiest attire, ranging from the Adams Family to Count Dracula, which really gave the event a Halloween atmosphere that Tracey and Brian had worked hard to achieve.

Margaret Garrett and her husband travelled up to Leeds on Saturday 4th to run the Age UK 10K Abbey Dash. Maggie works for Age UK on their national information and advice line in Ashburton and her mum lives in Leeds, who she hasn't seen for six years, making the weekend a very special one. The weather conditions were good for the start of the race. Maggie's husband was a volunteer and was positioned at the end of the finishing funnel, handing out the medals. Maggie ran a storming race, finishing in a great time of 56:31, beating her previous best by 3:59. 8157 runners completed the course.

The East Cornwall Harriers staged The Cornwall marathon which also took place on a busy Sunday of racing. The race started at Millenium House Pensilva, taking the runners on a scenic circular out and back route which took runners along the Draynes Valley, through the 'Poldark' country of Bodmin Moor, past King Arthur's legendary Dozmary Pool, Du Maurier's Jamaica Inn at Bolventor and back along the Fowey Valley, taking in a climb to Foredown between miles 24 and 25, which most runners will remember for a long time, and not just for the fabulous views! The weather was dry but the rain moved in from the west as the race developed.

Six Trotters crossed the Tamar Bridge to take part. Allen Taylor completed the tough hilly course in a new course PB record of 3:22:43. The clubs other entrants included Sue Tremlett, Suzie Mills, Lucy Evans, Paul Sharples and Lance Mason. Sue Tremlett posted a new Marathon PB with a great time of 4:39:18. Suzie Mills also broke her PB in 5:18:49, Lance won the MV 55-59 category having clocked a time off 3:26:40 . Well done to you all for representing the club so well.

Graydon Widdicombe travelled to Milton Keynes to take part in a double marathon event, organised by Enigma Running. Graydon has taken part in a few of these events, and on this particular occasion, both days consisted of 7.5 laps around Caldecotte Lake. On Saturday the marathon was run clockwise and Sunday’s anti-clockwise.
In good running conditions Graydon managed 3:43:07 on Saturday, feeling quite comfortable. Sunday’s conditions were also good and he managed 3:50:37, which he was happy with. The last 6 miles or so were a bit of a struggle though. The marathon count increases by two!! 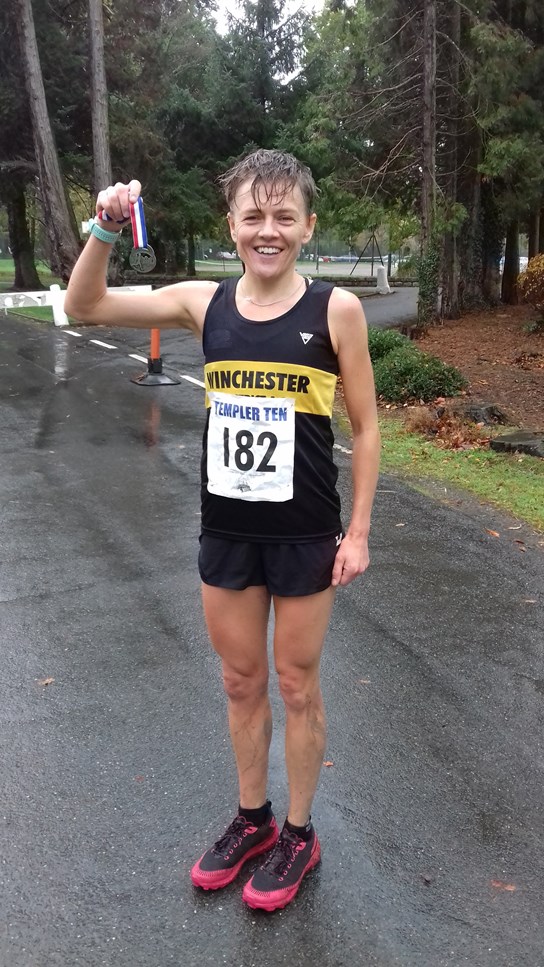 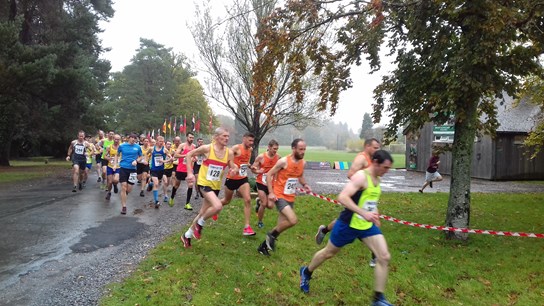 The leaders at Templer Ten 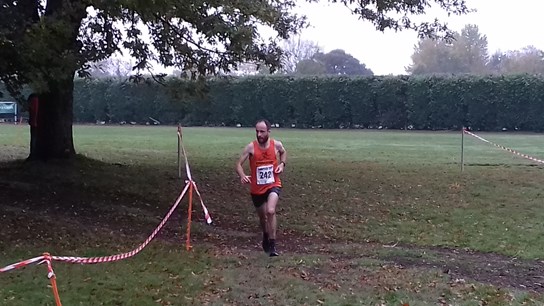 Arran Tocknell on his way to victory 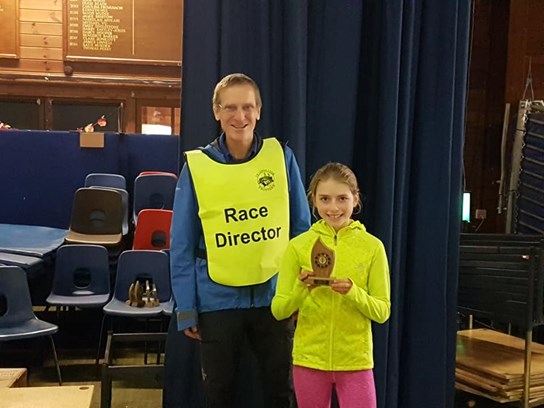 A happy winner from the fun run