Another busy weekend for the Teignbridge Trotters! 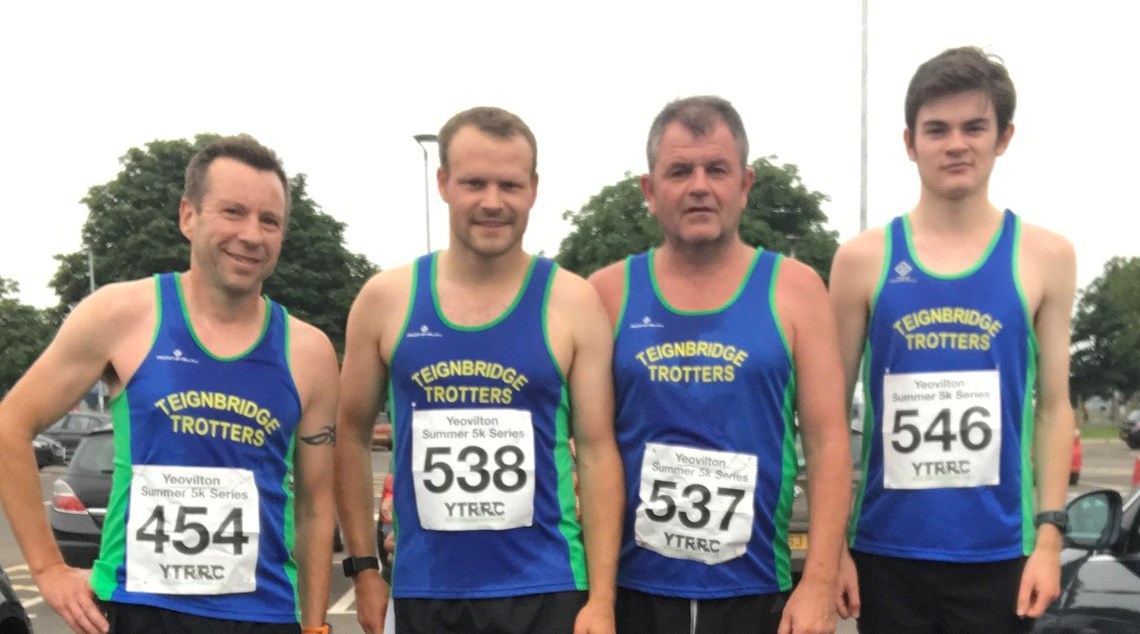 Trotters at the Yeovilton 5k

On Wednesday 13th June,  James Barnett, Nigel Barnett, Kevin Woodard and Richard Gentry took part in The Yeovilton 5k. This was Round 3 of their summer series. The idea of making the journey up was to try and run a fast time. It’s one of the fastest 5k races around as it has a very high quality field, it’s very flat and has no tight turns. It’s basically the second half of The Easter Bunny 10k which a lot of people will have run. Jamie was looking to break 16 minutes, but he got a bit excited at the start and went off with the guys trying to break 15 minutes, and inevitably suffered a painful last 3 kilometres. He finished 7th in 16:11. Nigel Barnett was more looking to test himself as opposed to getting a PB, as the Dartmoor Discovery was not very long ago! He finished 90th in 22:17. Kevin Woodard, like Jamie, was looking for a fast time. Kevin ran a very well paced race, and managed to finish strongly. He finished 10th in 16:23, which is a PB of over 20 seconds. That’s a big chunk over 5k! He will now be joining Jamie in the pursuit of a 15 minute time! Richard Gentry was looking for a sub 20 minute finishing time, and you can say he paced it to perfection. He finished in 19:59! That’s got to be very satisfying when you sneak under your target like that! Richard was in 47th place overall.

On Friday 15th June it was the 3rd edition of The Run Exe Relays.
A 4 x 4km event organised very well by City Runs. Team Captain Tim Pratt entered our team of Kevin Woodard, (new member making his trotter debut) Steve Fletcher, Adam Johnstone and Jamie Barnett. There was some very good teams entered, but they were confident they could compete very well against them. Kevin set off on leg 1 and backed up his big 5k PB from Wednesday night with a great run of 12:34, again pacing his effort very well, and they were right amongst it. Steve took over on the second leg and ran a very strong leg of 12:49 to keep the team in 5th place. His first event as a trotter and he did a great job for the team! Adam Johnstone was making a step down from the longer distances to run the 3rd leg for us. 4k is like a sprint when you’ve been running marathons and beyond! Adam ran 13:18 for his leg and kept the boys in 5th place. The top 2 teams were getting away now but Adam worked hard and kept them within 15 seconds of 4th place, and 3rd just a bit further ahead. Jamie took over on leg 4 with the aim of trying to catch 3rd and 4th. Despite really feeling the effects of the 5k 48 hours before, he just focused on working hard and getting the most out of himself on the day. He ran 12:45 for the final leg, and they finished in a very respectable 5th place overall. The team ran an accumulated time of 51:26 for the 16km (10 Miles), and were less than 2 minutes behind the winners.It was pretty tightly contested at the front, and the whole team ran very well for them to be up there with 4 other great teams! There were 73 teams that competed in this event, and when running is often an individual sport it was great to be part of a team event! They definitely think that more Trotters should get some teams together for next year. It’s a great way to spend your Friday night! 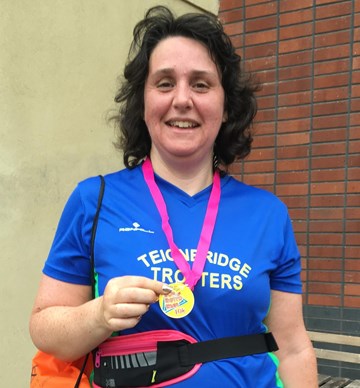 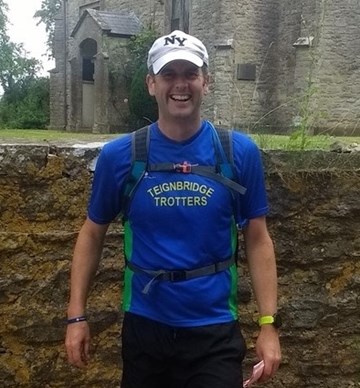 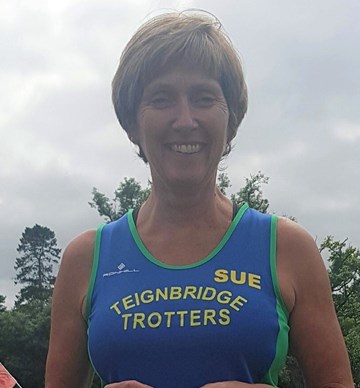 Graydon Widdicombe travelled to Dorney Lake to take part in a marthhon, brilliantly organised by Running Miles on Thursday 14th June. The event is 10x2.6 flat out-and-backs and takes place on a good quality tarmac path, which runs alongside the rowing lake that was used as part of the 2012 Olympics. In good conditions, if a little humid, Graydon was pleased with a finish time of 3:52:41. Graydon also commented that a mid-week marathon is a bit unusual in terms of preparation, but these events are worth the travel up the M5 and M4 - the goodie bag contains 6 bars of chocolate, which is reason enough.

Going into the weekend, Graydon also completed Saturday’s LDWA marathon, as part of the Langport two day festival, whilst Sally and Lance did Sunday’s event. A large group of Trotters took part in a LDWA event back in the Spring so it was good to do another one, with the focus being not getting lost (there is a certain amount of self-navigation required!) and having an enjoyable day out. Both days included the legendary LDWA aid stations with their many goodies on offer, and the weather was good for the weekend.

Both days started and finished at Langport’s Angel pub, with Saturday’s event being relatively flat, but being manly ran on challenging off-road terrain with lots of brambles and numerous styles and gates to traverse. The route took participants past lots of cows, swans and deer, and the main highlight for Graydon was running across a bridge over King's Sedgmoor Drain, which was very picturesque. Graydon was also fortunate to have been taken under the wing of a running club that had travelled from Colchester to do the event - Bentley Running Club - as it made the event much more enjoyable to be run/walking it as part of a group. These events are exceptional value for money for a marathon, costing just £5.50 each, and the group finished together in 6:43, for which everyone picked up a certificate for their efforts.

On Saturday 16th June Mark Wotton and Ruth Johnson took part in the Burrator Horseshoe Race, part of the Meavy Oak Fair. This is a extremely challenging, scenic 7 mile moorland run from Meavy across Dartmoor, taking in two big climbs up to Sheeptor and Gutter Tor. Conditions were perfect, quite dry underfoot and overcast, times were Ruth 1.06.54 and Mark 1.11.58.

Four Teignbridge Trotters completed at the rescheduled Age UK Exeter 10k on Sunday 17th June. There was a new course for 2018 starting and finishing at Exeter Quay, nice and flat if a little twisty. The route was very convoluted due to the flood defence work with lots of looping around and runners found the cobbles tough at the end but as always we're happy to
Tim Pratt was first Totter home to take third place overall in 35.10. Other results: Peter Hayward (51st 3rd MV55) 46.11, Kathryn Steemson (54th 1st FV45) 46.31, Louise Stokes (372nd) 1.13.52.

This weekend saw Sue Tremlett return to one of her favourite events - Hope 24.
It’s described as a really great off road event - which starts at noon on the Saturday and finishes at noon on the Sunday. The event is open to solos, pairs or teams of varying sizes. Out of our team of 5 (originally 6 but one too injured to attend), 3 were injured, one has been ill with a chest infection and one hasn’t been running much but even so they seemed to finish in 2nd place! They managed 22 laps of 4.8 miles, Sue ran 5 laps and walked the 6th with the team as their final lap, Sue managed to rack up just over 29 miles. The course started off with a section round the event field, then at about 1 miles turned up a long hill to an undulating common/moorland stretch. After the second mile the route went downhill mainly through woodland, mile 3-4 was along a slightly climbing farm track, with the last section being though woodland and ending on a nice downhill but then 400m round the event/campsite to the finish - a tough but enjoyable event! 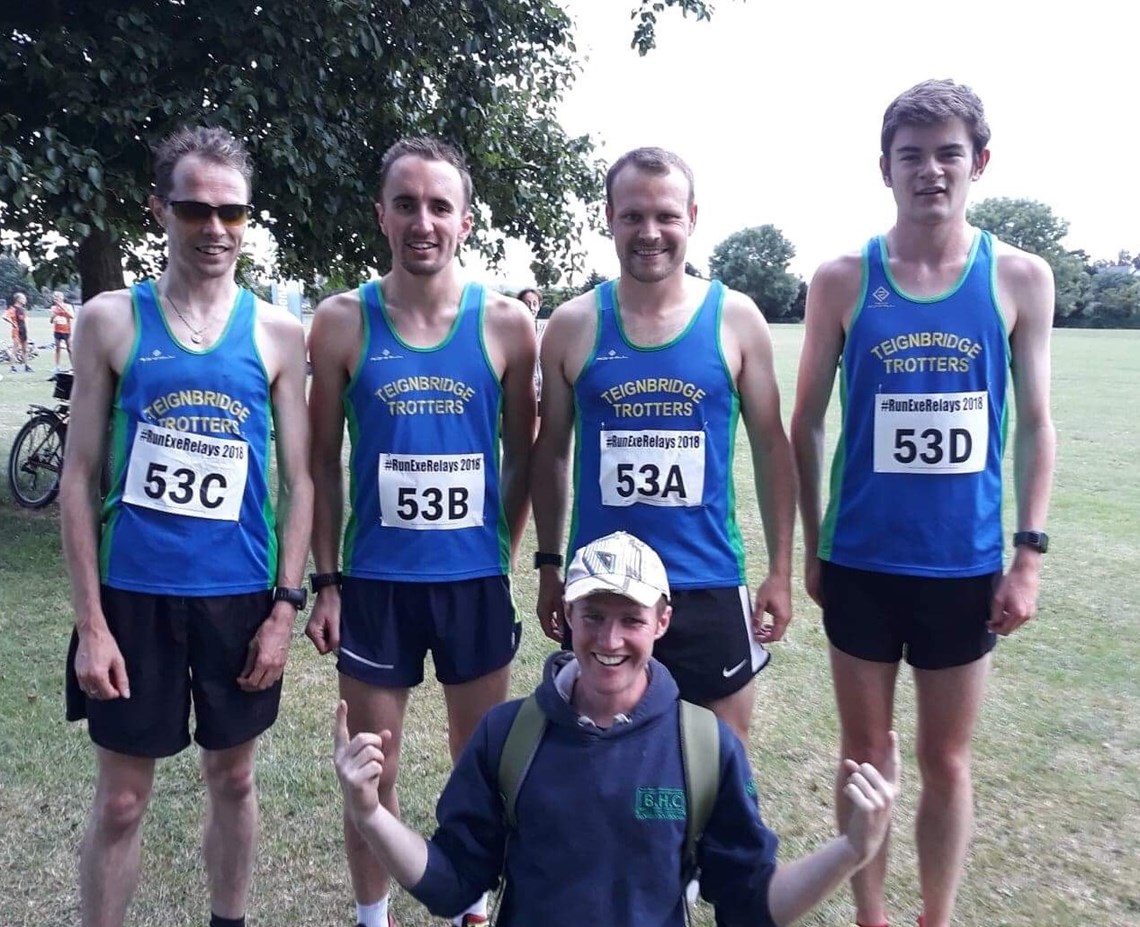