Three of the Trotters toughest cookies took on the Beast. They were Sue Tremlett, Kim Nichols and Derek Skinner. They all helped each other along the way, with Derek looping back to run with the ‘Beastly Babes’.

There were no numbers, no medals, no prizes, no times, no winners, and no marshals!! It was just a nice self-navigation social jaunt with no pressure!!

The weather conditions were dry and mild on the day. The terrain varied along the route, but there were plenty of wet, muddy stretches to tackle at different parts of the course.

The runners followed a picturesque cross country route of 7.6 miles on seldom used footpaths to Smeatharpe. Here the runners enjoyed a hot pasty and mulled cider at Smeatharpe Village Hall as a reward for their hard work. The next leg of the run was 2.8 miles on lanes and country paths, which dropped down to the village of Upottery. The Sidmouth Arms was another opportunity to stop for more refreshments! The 10 mile option finished here. A minibus was provided to take the 10 milers back to the start.

The 16 milers continued, taking the road to Rawridge. Here the runners ran across country, crossing the river Otter before climbing up to the top of the ridge. From above Luppitt, were spectacular panoramic views of the surrounding countryside, before running the remainder of the 3.3 miles to the Luppitt Inn for another pit stop. The last 2.7 mile leg of the day was over cross country at Luppitt Common and then back to Dunkeswell for a well-earned rest with food and drink available.

A record number of 235 runners took part, in what was a great fun and well organised event. 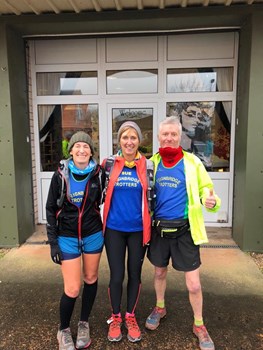 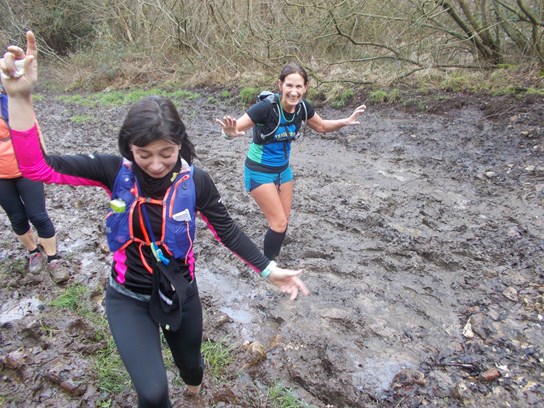 Kim Nichols wading through the mud 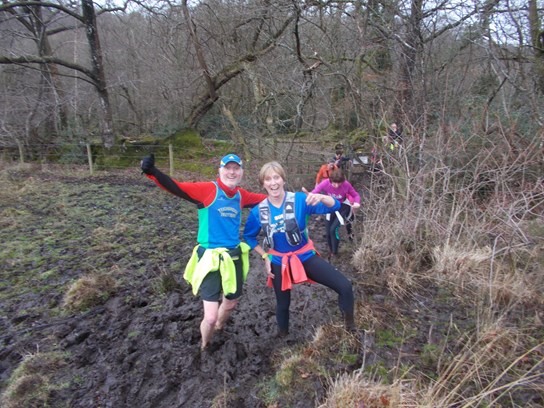 Sue and Derek having a breather