The race was superbly organised and marshalled by the Bere Alston Trekkers. The warm and sunny conditions made the test even tougher, especially on the uphill climb with high hedgerows each side, making it feel very oppressive.

The race started at the Bere Alston Primary School. The runners set off with a lap of the village, before they plummeted down a steep 2.5 mile stretch down to Weir Quay, on the banks of the River Tamar. A short flat section of the course along the river, gave the runners a chance to settle down into a nice rhythm, before starting the long uphill climb to the village. The high hedgerows either side of the narrow lanes, made it feel very oppressive. Once at the top, the runners were rewarded with a downhill finish back to the school.

Duncan and Kim represented the Club superbly well. Duncan finished in 22nd position in a great time of 46:33 and Kim competed the tough course in 52:37 to finish 51st. Well done both of you.

The race winner was Sam Yearling, clocking a time of 38:05. There were 165 finishers. 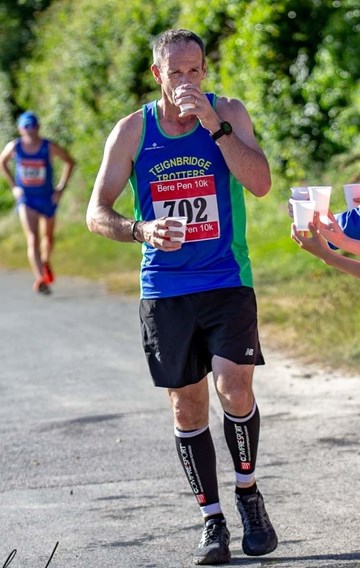 Leave some drinks for the rest Duncan?? 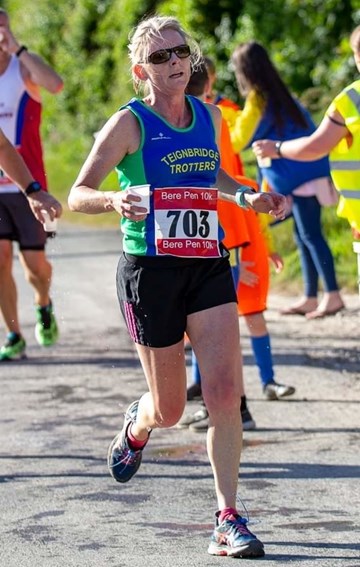 Kim Knight taking on water at the drinks station 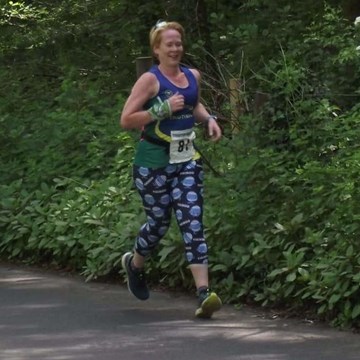 Suzie flying along at the Bampton to Tiverton 7 miler

A quartet of Trotters travelled to Mid Devon on Monday 27th May, to represent the Teignbridge Trotters in the Bampton to Tiverton 7 mile road race. Suzie Mills, Sue Brown, Susanne Westgate and Andy Distin were the Clubs representatives.

The race was organised by Tiverton Harriers. The first race was held on 22nd April 1946, with 27 competitors. The race was won by John Harvey from Tiverton, in a time of 42:19. This will be the 73rd running of the event.

The race started at the White Horse in Bampton. The runners followed scenic country roads with views of the Exe Valley between Bampton and Bolham. This was where the steepest climb of the course was situated. Having negotiated this test, the runners passed the front lodge of Knightshayes Court before crossing over the bridge, with the North Devon link road below. The last mile was pretty much downhill. The race finished in People’s Park, which overlooked Tiverton Town FC stadium.

Sue Brown was the first Trotter home, breaking the hour mark, finishing in a time of 59:26 to claim 115th position. Susanne Westgate ran another very consistent race to finish in 147th place, clocking a time of 1:05:24. Suzie Mills was somewhat amazed at her time, having not run much since the Ox 50 race a couple of weeks ago. Suzie finished in a time of 1:09:41 to claim 168th place. Andy finished in 183rd position in a time of 1:18:47.

The overall winner was Christian Hewitt, crossing the line in 39:28.

The event was superbly organised and the support really helped, especially on that steep hill!! The medal awarded for all the 187 finishers was one to behold. 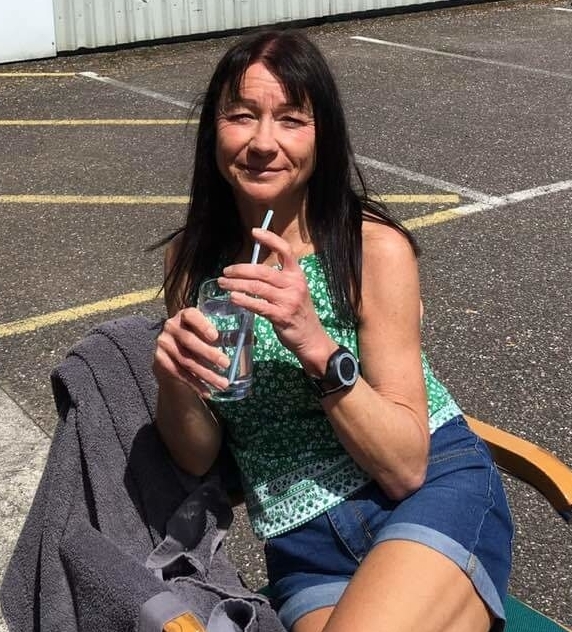 Sue Brown with a well deserved G & T after 7 miler 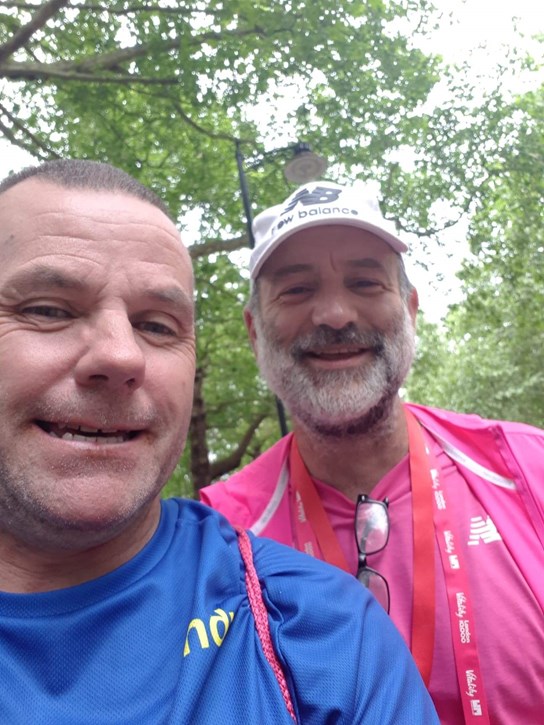 Andy Distin taking a selfie after Bampton to Tiverton race

The start of the race was at The Albert Dock. The runners set off through the city centre, passing many of the iconic sites such as the Cavern Club, where the Beatles once played, Goodison Park home of Everton FC, Stanley Park, The Liver Buildings and Chinatown. Thousands of spectators lined the streets and gave the runners great vocal support. Music and bands played along the route to make it a great carnival atmosphere. The final home stretch took the finishers down the Waterfront promenade to the finish at the Liverpool Echo Arena.

The weather conditions were wet during the race, but the sun did shine for the concert, with the headline act being Toploader.

Max completed the course in 4:21:35 to finish in 1594th position. His reward was a free beer after the race for his considerable efforts. 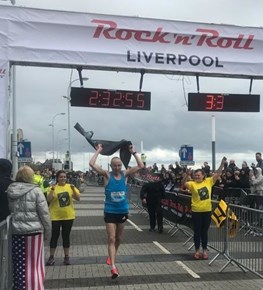 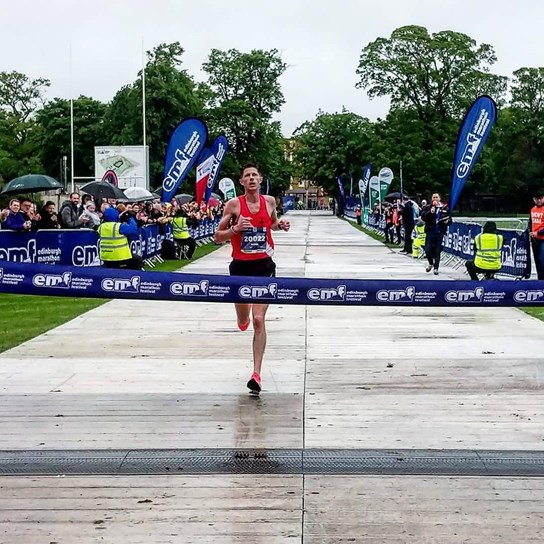 David Taylor took part in the Edinburgh Half Marathon on Sunday 26th May.

The race started at Potterrow in the grounds of one of the oldest Universities in the world. The runners set off through the very heart of Edinburgh. The route passed through Greyfriars and the National Museum of Scotland, before heading over the High Street and down The Mound. On past the Scottish National Gallery and into Princes Street Gardens, with the iconic Edinburgh Castle as the backdrop. The route then took in the ‘Gothic Rocket’, otherwise known as the Scott Monument, before heading towards and past the somewhat controversial Scottish Parliament building. Having run through the Royal Park, the route headed east towards the coast. The oldest golf course in the world is passed as they reached Musselburgh, where it’s documented that golf has been played as early as 1672, before heading further East on the flat towards the historic village of Preston Pans. At this point they turned back towards the beautiful finish line within the vast playing fields of Pinkie School. With a descent of almost 90 metres to near sea level, it is believed that this is the fastest half marathon route in the world.

The weather conditions were wet and windy during the race, making running conditions tough.