Trotters travel to Manchester for the 40th Manchester Marathon, Tavy 13 and a Texan relay

Nine Teignbridge Trotters travelled to Manchester to take part in the 40th Greater Manchester Marathon, held on Sunday 10th April. It is billed as the “flattest marathon course in the UK” and is ran on closed roads with excellent support all the way around.

Three Teignbridge Trotters tackled the race as their first attempt at the marathon distance. Richard Stephenson has been training well, and is a regular attendee on the social long runs on the weekend, and he was rightly delighted with his medal at the end. Also, although Suzie Mills has completed an unofficial marathon with Ben “401 Challenge” Smith, this was her first officially recognised marathon event.  Finally, this was also Dave McMorrow's first attempt.

On the same day, 3 Teignbridge Trotters took part in the Tavy 13 event, which is a half marathon around the roads, lanes and hills of Tavistock. The event was brilliantly organised by Tavistock Athletic Club, where the course started and ended on the running track. Luckily the heavy rain that was forecast stayed away, but it was a very gusty day. The course is very scenic and once the runners left the town centre there were a couple of large hills mainly into a head wind to test the mettle! However, there was some respite towards the end as the last 5 miles are flat or down hill and take in some great views over the countryside.

254 runners completed the race with Graydon Widdicombe finishing in 1:45:30 (66th). Following on from his excellent performance last weekend where he secured a London Good For Age time at Taunton Marathon, Paul Sharples did 1:48:09 (75th) whilst also securing first in his V60 age category. Oli Prouse completed the race in 2:00:45 (136th), for his first event in Trotters colours. All three Trotters commented on what a great event this is.

--
On the weekend of 2nd and 3rd of April, Peter Middleton competed in the Texas Independence Relay. The race commemorates the Texan fight for Independence from Mexico and is ran over 200 miles. The relays have teams of 12, with 2 vans per team, and the logistical management of the event is first class.

Peter ran 3 legs, and the highlight for him was in the second leg where he saw the ‘Beware of Alligators ‘ sign, which forced Pete to do a PB for the next 7 miles! Peter thoroughly enjoyed the event and would recommend it to anyone who finds themselves in Texas.

1)  Oli and Paul before Tavy 13 (thanks Oli for sending me the picture). 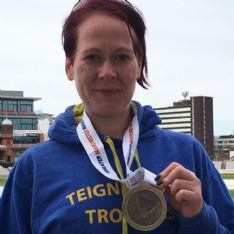