Richard Keatley takes a Club Record, and Trotters tackle some races over the festive period, often in very challenging conditions

Mark Wotton kicked off the New Year celebrations as he travelled to Chepstow for the Wye Wander, which is a 5-mile off road race held on 31st December. The event started at Chepstow Leisure Centre and is all off road and was very muddy, which made it incredibly difficult to stay upright through fields and forest tracks. The route takes runners along the River Wye and in places the path was only 12 inches wide and runners even had to go up a small rock face, which they had to be pulled up. The runners then went through the river before finishing back at the leisure centre. It was a well-organised, low-key event with free tea and cake at the end and Mark’s time was 57.36 coming 137 out of 247.

On Tuesday 19th December, Graydon Widdicombe completed the Enigma Christmas Cracker marathon, which is 7-and-a-bit laps around Caldecotte Lake. The race started at 8:30am in very cold conditions, with sections of the course being very icy so Graydon was thankful to get around it without falling over. It was Graydon’s 20th marathon of 2017, and he finished in 3:58. 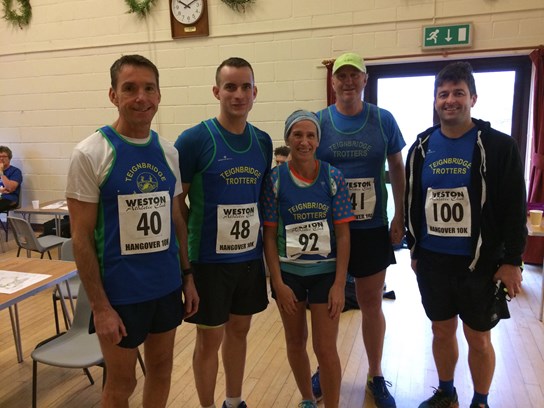 Trotters at the Hangover 10K near Weston-super-Mare

Suzie Mills has set herself a challenge to do 12 marathons in 12 months, and kicked off her year on New Year’s Day by travelling to Kent for the Betteshanger Marathon, organised by SVN.

The course is 12.96 laps around the Betteshanger Cycle Track, which is fortunately on tarmac and not mud, as the rain was horrendous for the majority of the time that Suzie was out there. On a nice day, Suzie commented that she felt sure that the views would have been stunning, but on the day it was just a case of getting it finished due to the cold and rainy conditions.. Suzie finished 51/59 in a 5.51.05.

Richard Keatley finished a great year, where he completed his 50th marathon in a calendar year (after already competing 52 in 52 weeks earlier in 2017). This is a new club record for the most marathons in a calendar year, beating the previous best of 37 set by Mark Wotton in 2015.

Richard’s final marathons of 2017 saw him travel up to Surrey to take part in a race on 28th December in Walton on the Thames surrey. It was very cold conditions although the sun was out, but the roads were icy even just walking to the start, and there were big puddles iced up & lots of mud. Richard completed this marathon in 5:14, which was part of the Firebird series with a large medal on offer. 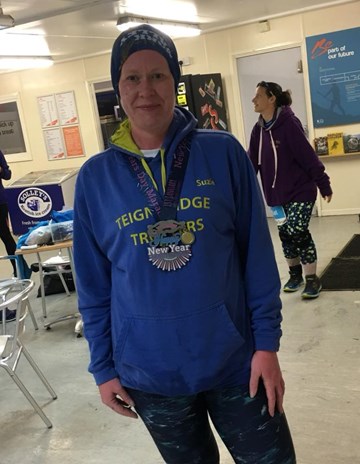 Suzie after the first race of her 2018 Marathon challenge 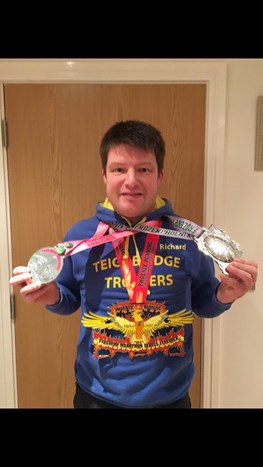 Richard with his medals from his 3 marathons

Richard returned back to surrey on the 30th December for Frozen Pheonix, which was along the river Thames and 8 laps. With heavy rain it was a very muddy run and Richard completed it in 5:20. Straight after this, Richard travelled to Deal in Kent for New Year’s Eve Marathon. Again the weather was bad, but all he thought about was Teignbridge Trotters and to finish his last marathon of 2017. It was an undulating course alongside the tarmac at Betteshanger Park. Due to the weather, so many had dropped down to the half but Richard carried on and pushed through the mud puddles, wind and rain to complete his 50th marathon of 2017, in a time of 5:42. 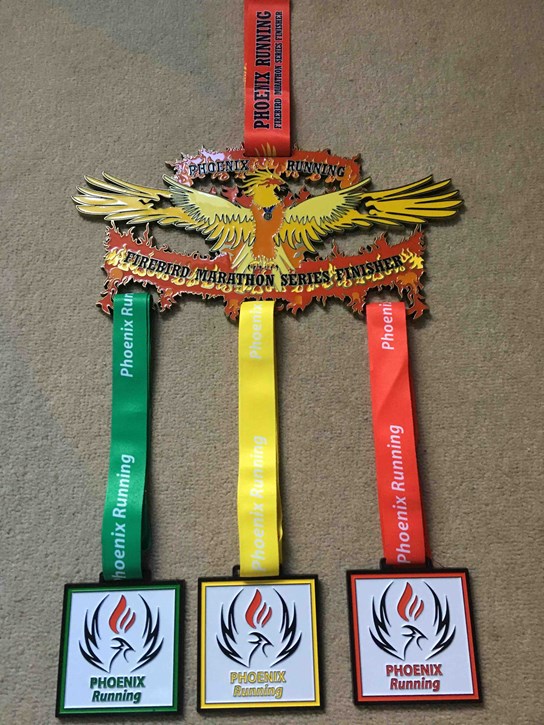