How it all started...

The inaugural General Meeting of the Trotters actually took place on 2 July 1984. However, to find the true beginning of the club you have to go back a further two years to an evening in the community centre in Newton Abbot.

Back in 1982 an article was placed in the Mid-Devon Advertiser to see if there was anyone interested in meeting up to train for the second London Marathon. A meeting was arranged and chaired by George Sydenham, who was the director of recreation and tourism for Teignbridge. Those present agreed to meet at Dyrons (now called Newton Abbot Leisure Centre) on Sunday mornings and go for a training run. The route and distance was decided that morning. Thus the Trotters were spawned.

This was the beginning of the great running boom and those early members were treated as local celebrities. Photo sessions were arranged with the press, and the local TV even came to film them running around Bakers Park. The official club kit was a light blue running vest with Teignbridge Trotters printed on the front and a message on the back inviting anyone following to ‘Holiday in South Devon’.

Back then the annual membership was £2 with a £1 joining fee. The Trotters staged their first race, the Teignbridge Ten in March 1985. This was quickly followed by the Teignbridge 4X4 mile relays in November of that same year (both races no longer take place).

The Moorland Run (now called the Haytor Heller) attracted 60 entrants for its first staging in July 1986. It has gone on to be one of the most popular short off-road races on the circuit. The last six years the race has sold out, reaching its 350 entrant limit long before race day.

In 1988 after an EGM the constitution was changed to allow 16-year olds to join (previously the minimum age had been 18). The ever popular Club Championship was introduced by Dave Dunn (who was made a life member in 2014) back in 1991. This was followed by the first Ladies’ 10K in 1993. Back then the Ladies’ 10K started in the centre of the town and was held on busy main roads, a far cry from the rural country lanes it’s now run on.

In 1993 Marion Luker was crowned Teignbridge sports personality of the year. To date she remains our only member to have won the title.

1995 saw the introduction of new club kit. This was a royal blue vest with green side panels and yellow print. This remains the same kit that members wear today.

In 2000 the Trotters took over the staging of the Totnes 10K race. It remains our biggest race as far as entrants are concerned, we had 631 enter in 2014. There is also a fun run that accompanies it, attracting over 150 youngsters.

Training nights remained on a Wednesday. In 2004, however, the club introduced an additional training night on a Monday. This soon proved popular and meant the need for more qualified club coaches.

Due to parking difficulties the club had to leave their spiritual home, Newton Abbot Leisure Centre, and relocate to Coombeshead College in May 2011. The club then moved to its current home, the Newton Abbot Recreational Trust (REC) in April 2016.

The clubs biggest challenge was taking over the staging of the Dartmoor Discovery (affectionately known as the DD) in 2011. This was a huge undertaking and involved the whole club pulling together to help stage this notoriously tough 32-mile ultramarathon. The race has gone on to attract a real cult following and, in 2014, 2015 and 2016 it sold out in six days!

In addition to our running we are known for being a club with an excellent social scene. With numerous events organised through out the year.

That pretty much brings us up to the current date. Our membership is as strong as ever: we currently have over 280 members, which keeps our membership secretary, Kevin Besford, very busy.

If you would like further details then please contact our club secretary, Liz Barnett on 07930 860481 or our membership secretary, Kevin Besford on 01626 351892 or contact us by email: info@teignbridgetrotters.co.uk 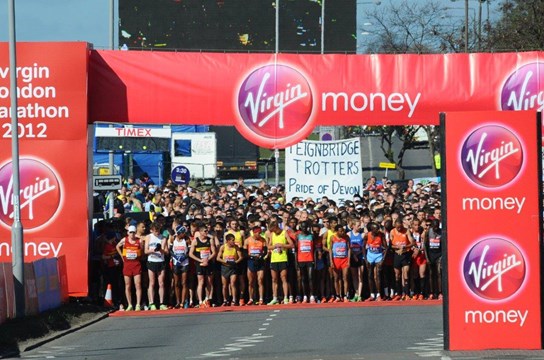 A Trotter tradition at the London Marathon! 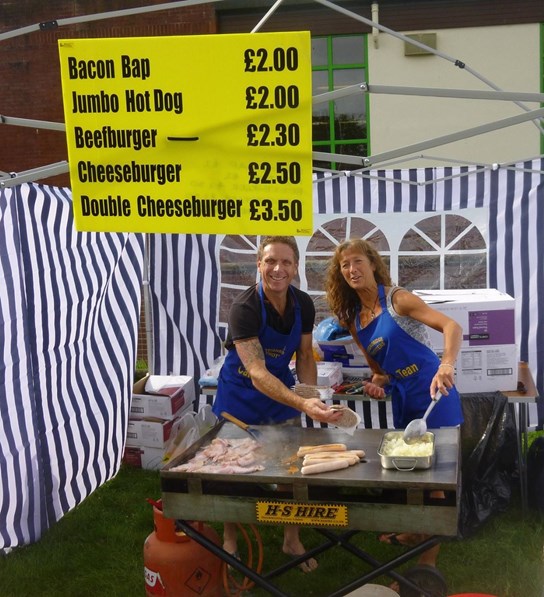 Russ and Jacki in action at the Totnes 10K