Dave nets ninth in the Grizzly

Eleven Teignbridge Trotters took on the infamous "Grizzly" at Seaton on Sunday. Organised in various forms since 1988 by Axe Valley Runners, the 20 mile race is a true multi-terrain event, involving long stretches of shingle beach, in addition to muddy bogs and the inevitable steep hills. There is also a companion "Cub" of around 9 miles.

The weather conditions for the race were never going to be ideal, with a strong westerly wind blowing and showers forecast, but the hailstones were a surprise to many of the runners, who annually make the journey to East Devon from all parts of the country.

Dave Miller showed his mettle throughout the gruelling course, by finishing ninth overall with an astounding time of 2:37:07! Second Trotter home was Ewan Walton in 2:58:08, followed by John Tweedie (3:17:40).

Meanwhile in Cornwall, five intrepid Trotters were attending the 6th "Duchy 20" at Redruth. Starting at the Penventon Park Hotel, the event is hosted by Cornwall Athletic Club and runs in conjunction with the long standing "Duchy Marathon".

Finally, not to be outdone, Michelle Willocks-Watts travelled to Wiltshire for the "Salisbury 10" mile race. Runners followed a scenic route out of the City, along the banks of the River Avon and through the gently undulating Woodford Valley, before returning towards the unmistakable spire of Salisbury Cathedral. A strong headwind did not deter Michelle as she romped past the finish line in 1:20:41 and in doing so, gained a personal best time.

On the evening of March 4th a small group of Trotters took part in the fourth round of the 3K Winter Series. The annual event is sponsored by Brooks and staged by Ironbridge Runner Events at the Exeter Arena. Late afternoon sleet and hail flurries had cleared, leaving cold dry conditions. However with frost settling on the track, the bends proved more than just a challenge!

There were several outstanding performances: Mike Eveleigh won the "B" race in 11:07, earning him 1st MV on the night. Second place in the "C" race was taken by John Caunter, with a time of 12:21 and third place in the "D" race was achieved by John`s wife Tina in 14:10.

The 5th and final round of the series is planned to take place on Wednesday 18th March, at Exeter Arena, to decide the overall series winners. 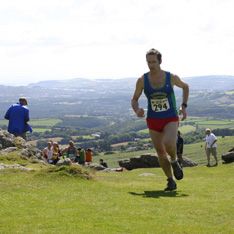