One old, one new and a small amount of blue

In a departure from the previous hectic weekend programmes for the Teignbridge Trotters, only two events attracted just nine club members this week. An old favourite, the 6 mile Killerton Kanter, run by South West Road Runners, took place on Saturday and is described as a `perfect summer evening run`. Starting and finishing at the National Trust Killerton House estate near Broadclyst, the undulating route through park and woodland saw 140 finishers - a figure slightly down on 2008.

On Sunday, three Trotters attended the inaugural Yeo Mill Yomp at West Anstey in Exmoor. The 10.25 mile mixed terrain race was organised by the Tiverton Harriers, in aid of the Village Hall. Over 1,000 feet of ascent faced the 135 runners, almost from the start. Open moorland, muddy trails and two streams were to follow, however rugged gullies strewn with rocks proved particularly challenging! The course was well marshalled with sufficient water stations and shows great promise for the future.

John Caunter led the trio home in a very respectable 1:32:20, followed by Graham Penn in 1:41:15. Tina and several other competitors unfortunately took a wrong turning early in the race, adding almost 3 miles to the distance. Tina`s time of 2:21:53 is therefore quite commendable. 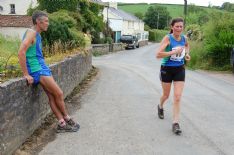 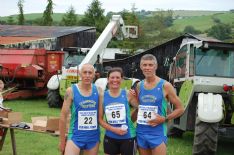 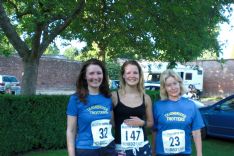