Otters, Ducks and Gold for the Trotters

Five Teignbridge Trotters were at Tipton St John on Saturday lunchtime, for the 3rd Otter Valley Rail and River run. The 10k multi terrain event is organised by the Women`s Running Network, on behalf of the Playing Fields Association. All proceeds go towards the upkeep of the grounds, which were badly damaged in floods last year. The course was well marshalled and proved quite challenging in the initial stages.

On a very wet Saturday evening, thirteen club members attended the Duckponds 7k at Oreston Primary School Playing Fields. This popular race, hosted by Plymstock Road Runners, is a two lap multi terrain course in and around Radford Park. Thirteen turned out to be anything but unlucky for the ladies as they walked away with 1st Female Veteran Team prize.

First Trotter home was Garry Smart, in 6th position, out of a field of 158 finishers and a time of 25:26. Roger Hales still apparently fresh from his exertions at Tipton St John, was second across the line, 15th overall in 28:21. Tracy Elphick ran a good race, finishing in 30:00, 1st FV35, 3rd lady in 34th overall position.

Sunday saw eleven Trotters flying the flag in Somerset at the Wellington 10. Starting and finishing at the Rugby club, competitors had the choice between a 10 mile and a 10k course. Those choosing the former were (in finish order): Mark Becker, Eyvol Aston, Tom Burman, Graeme Baker, Graham Penn, Steve Rawlinson, Kevin Besford, Jo Becker and Steve Blackburn, whilst husband and wife team of Nathan and Tracy Elphick opted for the 10k.

Conditions were far from ideal for the undulating on road course, with a thorough soaking at the start and humid air to contend with thereafter. The results are unavailable at present due to `finish line problems` and will be included in a later issue.

Also on Sunday, Peter Blakesley and his wife Angela completed the South West Triathlon at Caldicot in Monmouthshire. Peter`s combined time for the sprint event (400m swim/ 19k cycle/ 5k run) was 1:22:38, which placed him 3rd in his age group, with Angela completing in 1:31:14. This was their first such event.

Meanwhile, the intrepid Roger Hales was going for a hat trick. Accompanied by Ian Langler and Jim Donovan, he was at the 10.5 mile race in Okehampton, hosted by the newly formed and UKA registered Okehampton Running Club. Once again, times and positions are yet to be posted.

On Sunday 5th July, lone Trotter Ewan Walton sampled the delights of the Callow Fell Race in the hills behind the Ragleth Inn, at Little Stretton in Shropshire. The 5 mile course has 2,700 feet of ascent but held no terrors for `Callow Veteran` Ewan as he arrived at the finish in an excellent 1:26:44 and 29th in a small field of 52 robust finishers.

Finally, in Exeter on Tuesday 7th July, four Trotters took part in the second round of the Run Exe Summer 5k series. Now in its second year, the flat two lap traffic free event attracted 64 finishers who had to contend with strong winds on an otherwise pleasant evening. John Caunter led the Royal Blues home in a fine time of 21:05 (33rd overall), followed by Brother Gary in 36th position (21:47). The family affair was completed by Syd Willocks (22:46) and his daughter Michelle Willocks-Watts (24:19). 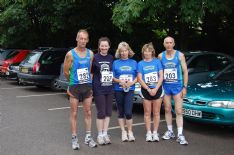 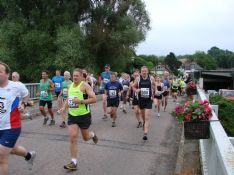