Rewarding weekend for the Trotters

Sixteen Teignbridge Trotters made the short journey to Paignton on Sunday for the Brooks Torbay Half Marathon. Almost perfect overcast conditions, with a light breeze aided the runners on the two lap course to Torquay and back.

Late entrant Chris Cleave set a rapid pace from the start, tearing across the line 40th, in a field of 1,348 finishers, with a time of 1:25:41 and becoming 4th Male (25-29) in the process. Second Trotter Mike Hill arrived 97th in 1:30:51, followed by Daryl Milford, running his first race in Royal Blue and summoning sufficient energy at the end to storm past several preceding runners in an enviable 1:32:54 and 119th overall.

Mark Wotton, with his insatiable appetite for the unusual, headed to Mid Wales on Saturday for the Red Kite Challenge. The 11.5 mile multi terrain course starts at the Nant Yr Arian visitors centre, 10 miles east of Aberystwyth and includes some very challenging tracks and trails. Mark completed the event in a respectable 1:48:33.

The Bampton 10k was held on the previous Saturday evening and attracted the attention of seven club members. Unfortunately there were several discrepancies in the provisional results but they are now confirmed as: Tim Theobald 41st in a field of 235 finishers with a time of 42:59, followed by Tracy Elphick 69th in 45:22 and Mark Wotton 79th in 45:59. Other runners completing the undulating course in warm conditions were: Sharon Bowman (49:11), Graeme Baker (50:19), Stephen Wallace (52:01) and Steve Rawlinson (54:54).

On the evening of Thursday 18th June, a group of seven Trotters flew the flag in Exeter at the Festival 4 race. The flat 4.33 mile course on the picturesque footpaths and cycle tracks around the River Exe and Exeter Canal was run in aid of prostate cancer.

Photos from the Torbay Half Marathon 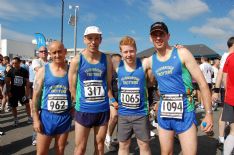 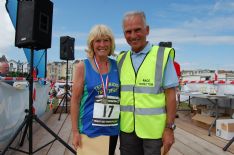